Those mashed potatoes look pretty good, but I’m waiting for the creamed spinach in a spray can. Yum! 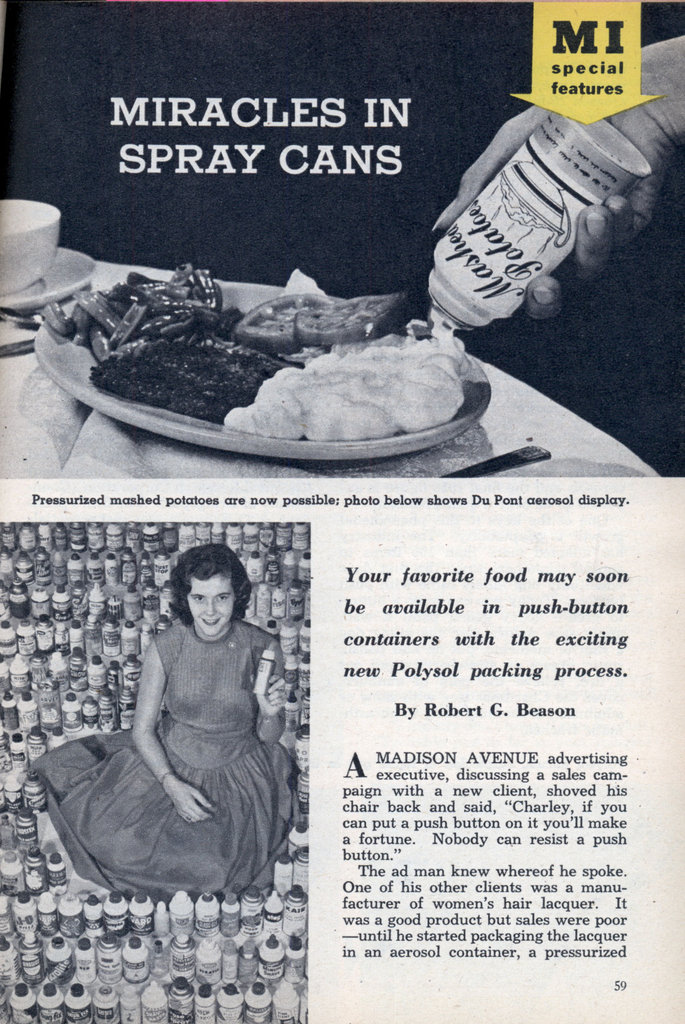 Your favorite food may soon be available in push-button containers with the exciting new Polysol packing process.

A MADISON AVENUE advertising executive, discussing a sales campaign with a new client, shoved his chair back and said, “Charley, if you can put a push button on it you’ll make a fortune. Nobody can resist a push button.”

The ad man knew whereof he spoke. One of his other clients was a manufacturer of women’s hair lacquer. It was a good product but sales were poor â€”until he started packaging the lacquer in an aerosol container, a pressurized can with a push button on top. In three years’ time, sales of the lacquer increased 25-fold!

America’s love of ease and convenience has created a whole new aerosol industry almost overnight. Anyone who can remember World War II is able to span the complete history of aerosols. Two U. S. Department of Agriculture researchers started it all in 1944 when they discovered that insecticides could be dissolved in solvents and liquefied gases and dispensed under pressure. The result was the bug bomb, a heavy-duty aerosol that became as useful to the GI as his M-l rifle.

All wartime production was taken by the government. But when the shooting was over, dozens of insecticide makers, using the USDA’s free patent, reduced the aerosol to hand size and put it on the market. Production amounted to only a few thousand in 1946, then jumped to 5-1/2 million the next year. The boom had begun. Consumers and industry in 1955 bought 235 million aerosols and the final 1956 figure is expected to be over a quarter-billion.

One of the keys to this phenomenal growth is adaptability. The industry has adapted more than 100 items to aerosol containers since the first days when only bug killers came with push buttons. Today you can press a button to grease heavy gears, paint a wall, apply shoe polish, give the ailing dog a shot of medicine, put on nail polish, squirt cream on strawberries, put out a fire, relieve the pain of sunburn, cover the Christmas tree with snow or administer a soothing drug to an asthmatic trachea.

A great many products are not found in aerosol form, notably some lotions, pharmaceuticals, cosmetics, alcoholic beverages and most foods. The reason lies in aerosol propellantsâ€”gases used to force a product out of the container. Most are refrigerated gases, or fluori-nated hydrocarbons, the same substances that keep the home refrigerator cold. The two principal brands are Freon, made by Du Pont, and Genetron, made by Allied Chemical & Dye.

Trouble is, they never have been cleared by the U. S. Food and Drug Administration as safe for use with foods. They also cannot be used with most waterbase materials (like rubbing alcohol) because of chemical reactions that change the product and corrode the can. Refrigerants have a chilling effect when they hit the skin, so most lotions are out.

One aerosol packager now has come up with a formula that promises to remove nearly all restrictions. It is called Polysol, developed by the Connecticut Chemical Research Corporation (Conn-Chem) of Bridgeport. The firm’s president, A. O. Samuels, sees vast potentials for his new method.

“The impact will be felt all through industry and on the consumer level,” he says. “It increases the possibilities of pressure packing better than tenfold.”

Probably the most startling potential of Polysols is in the foods line, long eyed hungrily by the aerosol crowd.

Conn-Chem already has produced experimental cans of peanut butter, cheese spread, mustard and catsup. Polysol gases are safe for use with foods and do not alter flavor or texture, the main requirements for public acceptance. At a press luncheon a few months ago Conn-Chem demonstrated a dry, dry martiniâ€”a whiff of vermouth sprayed on a glass of gin.

Any food that can be made into cream or liquid can be dispensed from Polysol bottles. The first to reach retail shelves, possibly in one to two years, probably will be mayonnaise, syrups, vinegar, cooking oils, salad dressings, sauces and mustard and catsup. Creamed vegetables like spinach, strained baby foods, even mashed potatoes are possible. The knife of practicality eventually falls, of course. Potatoes will probably always be too cheap for a costly dispenser.

The first Polysols are to hit the market this spring. In the van will be a depilatory. Hair-removers heretofore have had a limited market because they are hard to use and have an unpleasant odor. The Polysol product has a pleasant scent and is easy to apply. In five years, Samuels believes, a whisker-remover to eliminate shaving for men will be on the market.

A mouth wash and throat spray likely will be No. 2, followed by body rubs, eyewashes, anti-perspirants, personal and household disinfectants, cosmetics, pharmaceuticals, toothpaste and even some solids such as talcum.

“I frankly don’t know,” says Samuels. “Probably just as far as your imagination can take you.”