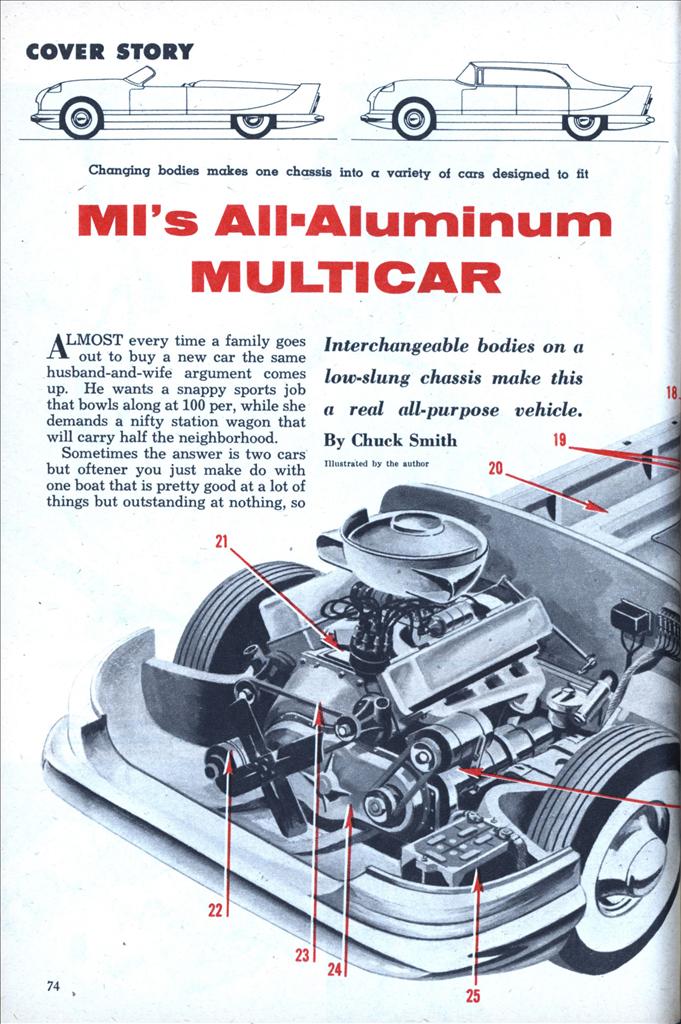 Interchangeable bodies on a low-slung chassis make this a real all-purpose vehicle.

ALMOST every time a family goes out to buy a new car the same husband-and-wife argument comes up. He wants a snappy sports job that bowls along at 100 per, while she demands a nifty station wagon that will carry half the neighborhood.

Sometimes the answer is two cars but oftener you just make do with one boat that is pretty good at a lot of things but outstanding at nothing, so three years ago I got an idea for a car that would solve all such problems, a true all-purpose vehicle which not only looks like but is several different cars. The secret is interchangeable bodies that fit one universal chassis and can be changed quickly. MI now presents the result of my design project as the Multicar.

This car has a lot of novel features besides its four different bodies, however. It is made almost entirely of cast aluminum, the weight is only about half that of a standard auto, the design makes it a foot lower than the average car of today and the price of mass-produced units is in line with other autos.

A Multicar family is set for any kind of driving. We’ll say it’s Saturday afternoon. The kids are at the movies, so young Joe and Mabel Brown decide to go for a spin in the country. The car is now a station wagon because last night they took a bunch of friends to a football game.

While Mabel waits in the driveway Joe backs into the garage, throws three switches on the dash and tips the hood forward. He attaches four thin cables and the body is lifted off. Then he backs under the sport coupe body, lowers it and makes sure it’s locked in place. The couple ride off down the street with the top down. Elapsed time: five minutes.

Sunday morning the whole family goes to church in the dignified hardtop sedan. In the afternoon Joe wants to haul some fireplace wood so another quick change produces a rugged pickup.

Thus is the Multicar an all-purpose vehicle.

I have designed four bodies, although most buyers probably would want only two. Likely combinations would be the sport coupe for trips and the station wagon for shopping, carrying friends and just general hauling. For the farmer, the sedan-pickup combo should take care of all needs.

As indicated in the illustrations, the detachable bodies extend from the tail-light housings to the firewall. The front seat is attached to the chassis, while the windshield, rear seat and other upper parts are on the body. Let’s consider the bodies: Sport coupe: Carries three passengers; roof folds into rear deck; huge trunk.

Station wagon: Carries eight, three in front, three in middle seat and two in twin seat facing aft. The back half of the roof slides forward to make a rumble-seat-in-reverse out of the wagon’s rear. Rear seats lift out and center seat folds forward and locks to back of front seat to make a long, open rear deck.

Pickup:, Cab seats three, is closed and has a rear window. Bed is seven feet long and 18 inches off the ground.

The bodies are stored in a regular height garage, slung from the ceiling on cables. Raising and lowering is done by an electric motor with shaft and pulleys, controlled by a button at hand height or an electronic dash control.

To reduce man-hours in assembly, the chassis is divided into three large castings, which contain all bearing seats. The sections break at the firewall and just behind the differential. After casting, parts such as wheels, motor and running gear are simply attached to the chassis— like putting together a model airplane at home.

Any standard V8 engine will fit the Multicar but an even better power plant is one of the new aluminum jobs envisioned recently by several companies, including Alcoa. Aluminum content runs as high as 70 per cent and weight is reduced accordingly.

One of the Multicar’s big changes is the power transmission setup. The engine is moved offside and sitting beside it is the automatic transmission. The torque converter goes in front of the engine, all of which means a level floor without humps.

The chassis is solid underneath, covered with an underplate that makes it as strong and rigid as a bathtub. It is only seven inches from the ground. On top of it go frame members that are three inches high. To them is bolted the rug-covered floor, which is ten inches off the ground. In the three-inch space between floor and underplate run the driveshaft, torsion bar springs and alleys for the twin exhausts.

The Multicar’s wheelbase is 120 inches, overall length 206 inches. With 8×14 tires the hood is an amazing 42 inches high, with the roof less than 54 inches. Inside room is greater than that of most standard cars on the road today. A low center of gravity makes it impossible to overturn.

A variety of colors could be used on the aluminum body, with the pigment anodized in the metal at casting time.