I can’t decide which picture I like better, the two guys fighting with sand blasters or the gas masks. 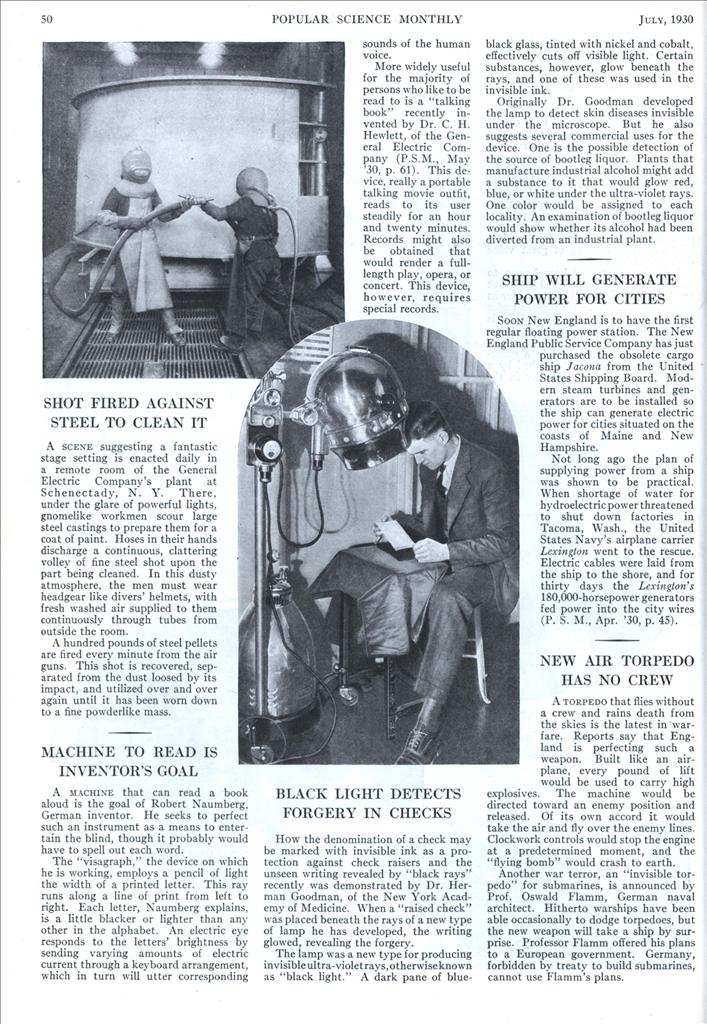 Miscellaneous Cool Stuff
SHOT FIRED AGAINST STEEL TO CLEAN IT

A scene suggesting a fantastic stage setting is enacted daily in a remote room of the General Electric Company’s plant at Schenectady, N.Y. There, under the glare of powerful lights, gnomelike workmen scour large steel castings to prepare them for a coat of paint. Hoses in their hands discharge a continuous, clattering volley of fine steel shot upon the part being cleaned. In this dusty atmosphere, the men must wear headgear like divers’ helmets, with fresh washed air supplied to them continuously through tubes from outside the room.

A hundred pounds of steel pellets are fired every minute from the air guns. This shot is recovered, separated from the dust loosed by its impact, and utilized over and over again until it has been worn down to a fine powderlike mass.

MACHINE TO READ IS INVENTOR’S GOAL
A machine that can read a book aloud is the goal of Robert Naumberg, German inventor. He seeks to perfect such an instrument as a means to entertain the blind, though it probably would have to spell out each word.

The “visagraph,” the device on which he is working, employs a pencil of light the width of a printed letter. This ray runs along a line of print from left to right. Each letter, Naumberg explains, is a little blacker or lighter than any other in the alphabet. An electric eye responds to the letters’ brightness by sending varying amounts of electric current through a keyboard arrangement, which in turn will utter corresponding sounds of the human voice.

More widely useful for the majority of persons who like to be read to is a “talking book” recently invented by Dr. C. H. Hewlett, of the General Electric Company (P.S.M., May ’30, p. 61). This device, really a portable talking movie outfit, reads to its user steadily for an hour and twenty minutes. Records might also be obtained that would render a full-length play, opera, or concert. This device, however, requires special records.

BLACK LIGHT DETECTS FORGERY IN CHECKS
How the denomination of a check may be marked with invisible ink as a protection against check raisers and the unseen writing revealed by “black rays” recently was demonstrated by Dr. Herman Goodman, of the New York Academy of Medicine. When a “raised check” was placed beneath the rays of a new type of lamp he has developed, the writing glowed, revealing the forgery.

The lamp was a new type for producing invisible ultra-violet rays, otherwise known as “black light.” A dark pane of blue- black glass, tinted with nickel and cobalt, effectively cuts off visible light. Certain substances, however, glow beneath the rays, and one of these was used in the invisible ink.

Originally Dr. Goodman developed the lamp to detect skin diseases invisible under the microscope. But he also suggests several commercial uses for the device. One is the possible detection of the source of bootleg liquor. Plants that manufacture industrial alcohol might add a substance to it that would glow red, blue, or white under the ultra-violet rays. One color would be assigned to each locality. An examination of bootleg liquor would show whether its alcohol had been diverted from an industrial plant.

SHIP WILL GENERATE POWER FOR CITIES
Soon New England is to have the first regular floating power station. The New England Public Service Company has just purchased the obsolete cargo ship Jacona from the United States Shipping Board. Modern steam turbines and generators are to be installed so the ship can generate electric power for cities situated on the coasts of Maine and New Hampshire.

Not long ago the plan of supplying power from a ship was shown to be practical. When shortage of water for hydroelectric power threatened to shut down factories in Tacoma, Wash., the United States Navy’s airplane carrier Lexington went to the rescue. Electric cables were laid from the ship to the shore, and for thirty days the Lexington’s 180,000-horsepower generators fed power into the city wires (P.S.M., Apr. ’30, p. 45).

NEW AIR TORPEDO HAS NO CREW
A torpedo that flies without a crew and rains death from the skies is the latest in warfare. Reports say that England is perfecting such a weapon. Built like an airplane, every pound of lift would be used to carry high explosives. The machine would be directed toward an enemy position and released. Of its own accord it would take the air and fly over the enemy lines. Clockwork controls would stop the engine at a predetermined moment, and the “flying bomb” would crash to earth.

Another war terror, an “invisible torpedo” for submarines, is announced by Prof. Oswald Flamm, German naval architect. Hitherto warships have been able occasionally to dodge torpedoes, but the new weapon will take a ship by surprise. Professor Flamm offered his plans to a European government. Germany, forbidden by treaty to build submarines, cannot use Flamm’s plans.

EFFECT ON LIFE OF UNSEEN RAYS IS STUDIED AT BERLIN
There may seem to be no possible connection between X-rays and seaweed, but the exposure of low types of life to rays of all kinds is one of the experiments being made at the University of Berlin, in the “ray laboratory.” There physicists are seeking to determine just how various forms of life are affected by the invisible heat rays, light rays, ultra-violet rays, X-rays, and even the super-penetrating rays of radium. Medicine and biology may profit by the work being done in the new laboratory.

Its fourteen varieties of X-ray apparatus suggest the completeness of the laboratory’s equipment. Its pride is a thousand-watt lamp for producing ultra-violet or “black light” rays, one of the most powerful of its kind in the world. A meteorological station on the roof of the three-story building measures the amount of heat and of ultra-violet rays received daily in natural sunshine.

SMOKE MASKS OF 1664 AND 1930 COMPARED
There were smoke masks as early as 1664, but they were not much protection against smoke. What 266 years have done for these masks is shown in this unusual photograph of three types of helmets, preserved in a Berlin museum.

The earliest type, shown at the left, had an air tube crossing the top of the mask and hanging from the back of the wearer’s head. The type shown in the center left much to be desired in the way of vision. At the right is the 1930 model. The wearer carries his own oxygen supply, and wide-lensed peepholes ensure a good view of anything that might be ahead.

ELECTRIC TRAINS RUN WITH NO CREW ABOARD
Electric trains without crews—in fact, with no human being aboard—will soon haul rock for cement making from quarry to crusher at a Dallas, Texas, plant. When the cars have been loaded, they will appear to start of their own accord for the crusher. At their destination the motors cease humming, brakes go on automatically, and the train stops.

Just like toy electric trains, these industrial strings of cars are controlled from a distance. Two operators, one of them placed where he can see the loading of- the cars and another at the receiving end, control their movement by electric switches. General Electric Company engineers worked out a “remote control” system in which any section of track may be electrified; by turning the current into all of them the train is made to run from one end to the other.

Running downhill, the driverless train does not speed up. The motors of the cars automatically turn into generators and feed electric current back into the third rail, helping to drive the other cars.

“WORLD” PHONE BOOK OUT IN DENMARK
The first “world telephone directory” has just appeared in Denmark. It lists the names of between 50,000 and 60,000 subscribers in many countries who make habitual use of international telephone lines. Editions in English, French, and German are available.

Growing networks of telephone lines that link all the countries of the world have made such phone books necessary. The latest addition to the chain is telephone service, via radio, between the United States and South America. President Hoover recently opened the new line by telephone conversations with the presidents of Chile, Uruguay, and Argentina.

POWERFUL DRUGS FOUND IN VENOM OF TOAD
Might a toad cure heart disease? Yes, if he is treated in the right way, according to a recent medical discovery. Extract from glands that lie behind the eyes of a toad found in the river and lake regions of China contains four chemical substances that have a beneficial medical effect. These substances were isolated at Johns Hopkins Medical School by Dr. H. Jensen and Dr. K. K. Chen, the Chinese chemist who produced from an old Chinese drug plant the drug “ephedrine,” now widely used in treating colds and hay fever. Two of the substances separated out of the toad’s glands were found to have an effect on the action of the heart, similar to that of digitalis, a drug now generally used to strengthen the heart muscle. The sonorous names “cinobufotoxin” and “cinobufagin” have been given to the new drugs. The first of these is so powerful that one thousandth of a gram (100 such doses would be required to equal the weight of a single bird seed) would kill an ordinary cat.

Toad venom has for centuries been used in China to cure canker sores, sinus trouble, certain inflammations, toothache, and bleeding gums. The venom proved effective in stopping bleeding and in draining infected sinuses, Dr. Chen found, because it contains a certain amount of adrenalin, the chemical substance which raises blood pressure. Ordinarily this is extracted from the adrenal glands of animals.