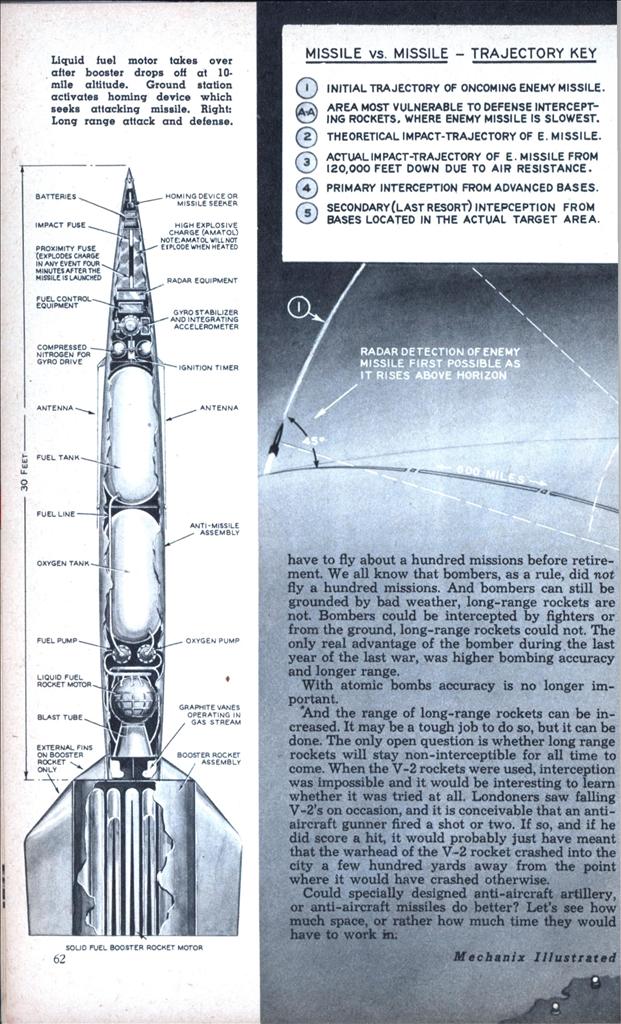 That there are important advantages on the side of the pilotless missile, especially the long-range missile, has been recognized for quite some time. Soon after the end of the war in Europe my friend A. V. Cleaver of de Havilland Aircraft (England) pointed out that V-2 rockets might be actually cheaper than bombers as far as the delivery of high-explosive is concerned.

It is true that a V-2 burns up a little over eight tons of alcohol and expensive liquid oxygen in order to carry a one-ton bomb over a distance of 200 miles. It is also true that a large bomber can carry about eight times the bomb load of a V-2; but it costs over 30 times as much. It also needs a crew whose training is a big item in the budget. It needs hangars and airports with long runways.

In order to compete with V-2 rockets, as regards poundage of bombs delivered per dollar of expenditure, a bomber would have to fly about a hundred missions before retirement. We all know that bombers, as a rule, did not fly a hundred missions. And bombers can still be grounded by bad weather, long-range rockets are not. Bombers could be intercepted by fighters or from the ground, long-range rockets could not. The only real advantage of the bomber during the last year of the last war, was higher bombing accuracy and longer range.

With atomic bombs accuracy is no longer important.

And the range of long-range rockets can be increased. It may be a tough job to do so, but it can be done. The only open question is whether long range rockets will stay non-interceptible for all time to come. When the V-2 rockets were used, interception was impossible and it would be interesting to learn whether it was tried at all. Londoners saw falling V-2’s on occasion, and it is conceivable that an antiaircraft gunner fired a shot or two. If so, and if he did score a hit, it would probably just have meant that the warhead of the V-2 rocket crashed into the city a few hundred yards away from the point where it would have crashed otherwise.

Could specially designed anti-aircraft artillery, or anti-aircraft missiles do better? Let’s see how much space, or rather how much time they would have to work m.

A V-2 rocket—to stick to something that is known and in actual existence—travels along a trajectory which looks like, and is, the chopped off upper section of an ellipse. The two points where the ellipse touches the ground are 200 miles apart, the distance measured along the ellipse is a little short of 300 miles, and the highest point midway between take-off and crash is 70 miles above the ground. The highest velocity along that trajectory is almost precisely one mile per second, but when the rocket returns to the ground, entering denser layers of the atmosphere, it is greatly retarded, striking with “only” about 1,000 mph or a little less than 1/3 of a mile per second. The whole trip makes a few seconds short of five minutes.

Since radar cannot “see” over the horizon, no present or future radar set could catch the rocket at actual take-off, but it can do so when it rises above the horizon. If the defense is lucky, their radars will give them some four minutes’ warning before impact. When the rocket is 12 miles above the target area, there are still 36 seconds left, but that is not enough time for anti-aircraft artillery. An anti-aircraft shell needs about that long to climb to 10 miles. The shell would get where the rocket was half a minute ago at about the time the rocket crashes into the ground. Of course the guns could be fired half a minute earlier (one minute prior to the crash of the rocket) at the point where the rocket will be 30 seconds later. But it is obvious that it would need a large and probably practically unfeasible expenditure of anti-aircraft shells to hit a falling rocket. And if a rocket carries an atomic warhead the explosion of that atomic charge a few miles above a city is nothing pleasant to contemplate.

Obviously, interception should take place much earlier than 30 seconds before crashing, and especially at a time when the rocket is not almost vertically over the target area but a large number of miles away horizontally, so that the explosion of the presumed atomic warhead takes place very high and at considerable distance from the target area.

Anti-aircraft guns don’t have the necessary long reach to do that, but rockets have. The only possibility for intercepting a long range rocket is another long range rocket. A rocket held in readiness and fired at the instant where the radars catch the enemy rocket rising above the horizon, will theoretically intercept the enemy rocket reasonably near the halfway mark. It would be almost a hundred miles away and some 50 miles up, virtually in empty space where even an atomic explosion would not do any damage.

It sounds more likely to equip the intercepting rocket with a homing device. We can assume that the attacking rocket is hot. The skin of the attacking rocket must have heated up on its upward path even if not as much as it will heat up on the downward path. The ascending rocket is slowest where the air is densest near the ground, while the descending rocket is fast in the dense air. And the rocket motor, even if cooled, must still be radiating some heat a few minutes after burning. This should be enough for a sensitive heat device. And it is hard to see how an atomic warhead carried by a rocket can be shielded well enough not to leak at least some radiation.

It is known that there are heat-homing devices, and devices which respond to the radiation which must leak from a comparatively large mass of plutonium can probably be developed too. The problem will be to make them both light and sensitive enough.

All of this will probably be full of practical difficulties which will not be easily overcome. But a long-range rocket is no longer completely immune to interception. Theoretically, another long-range rocket, guided by radar and equipped with homing devices, can meet it in mid trajectory high up in the upper layers of the stratosphere. But it must be borne in mind that even the most elaborately equipped anti-missiles will not be able to account for every one of a succession of attacking rockets. Some of the attackers are bound to “get through.” And if ten rockets with atomic warheads out of a hundred that were fired at a given target area succeed in escaping the intercepting missiles, it is—for all practical purposes—as bad as if they had all reached the target. •