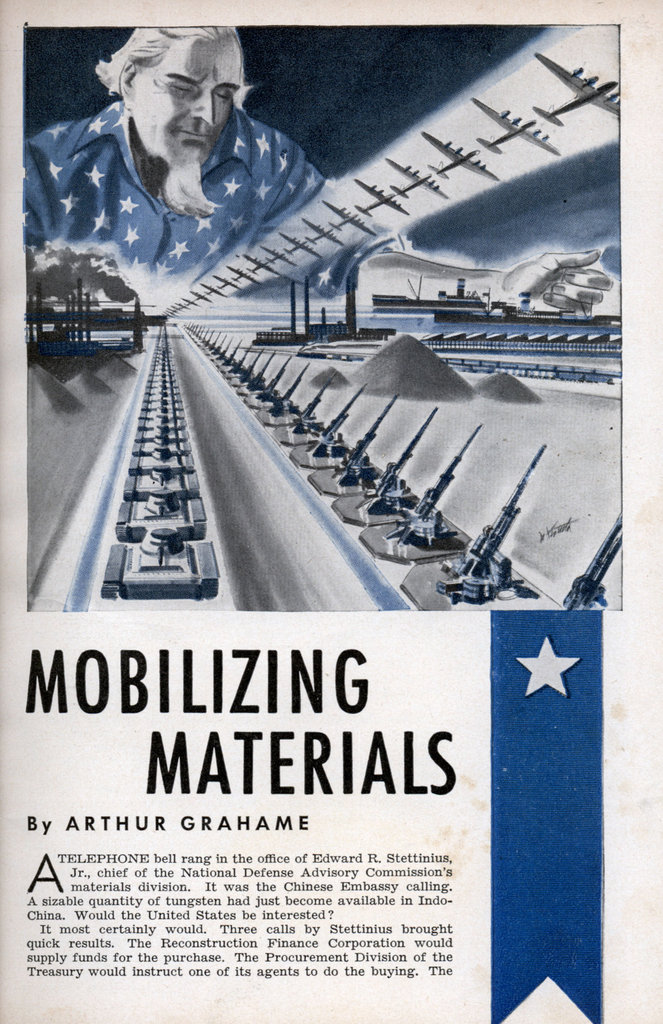 Why should high Government officials concern themselves about a load of tungsten, instead of leaving it to the regular channels of commerce? The answer is that U.S. mines yield less than a quarter of the tungsten that we need for armor-piercing bullets, lamp filaments, and tools. Therefore the Army and Navy class it among fourteen “strategic” materials vital for defense and currently obtained from abroad.

Other strategic materials include manganese, indispensable for purifying steel; rubber, for tires; chromium, for armor plate and high-speed cutting tools; tin for food cans, solder, and bearings; silk for parachutes and powder bags; coconut shells for the charcoal filters in gas masks. Mercury for fulminate detonators, antimony metal for storage-battery plates, manila fiber for ropes and cordage, mica for electrical insulationâ€”all these, and more, have been checked as “musts” on Uncle Sam’s shopping list.

If a war blockade caught us without them, America’s mighty war machine might never get going. Trucks and gun carriages couldn’t move, without bearings. Artillery shells without detonators to explode them would be no more potent than cannon balls. After tools available at the start of hostilities wore out, our prized Garand semiautomatic rifle would be impossible to manufacture. As Tom M. Girdler, prominent steel maker, puts it, “Down in Kentucky, in deep underground vaults, we have stored away a great pile of gold. The time might come when we would gladly give all of that gold for a pile of desperately needed manganese or chromium.”

So we’re taking no chances. A three-point Government program, now in full swing, is fast making the United States proof against blockade by any combination of hostile naval powers. First comes the obviously sensible step of locating and exploiting

key supplies nearer home. Dangerously vulnerable is the overseas trade route that brings us tin and rubber from British Malaya and the East Indies. So plans are well advanced to use Bolivian tin ore, by erecting smelters in the United States. Largely for lack of cheap fuel, Bolivia has no tin smelters, and has been sending the ore to England for refining. As for rubber, U. S. Department of Agriculture experts are making a $500,000 survey in Brazil, locating favorable sites for establishing rubber plantations.

Widespread deposits of low-grade manganese in the United States and Cuba, long undeveloped, are now being honeycombed with mine shafts. Through a new electrolytic process, invented by Prof. Colin G. Fink of Columbia University, the ore can be purified to rival that of Russia and the African Gold Coast.

Soaring prices of Spanish and Italian mercury, to as much as $200 for a seventy-five-pound flask, are reopening abandoned mines in California and Washington. National production from the scarlet ore, this year, may amount to 25,000 flasks. In time of peace, this is enough to fill all our needs. But what of extra wartime demands?

Here is where the second phase of our raw-material preparedness comes inâ€”to find substitutes that can replace or supplement items on the strategic list. If Germany and other embattled countries can go “ersatz,” so can we, and our chemists and metallurgists are prepared to go them one better. Surprises are in store for housewives and soldiers alike.

Eating soup and beans out of silver-lined cans appears a likely prospect. To make ordinary Ntin cans, a coating of tin is applied to “black plate,” or flat rolled steel. In case of need, however, the steel could be plated first with copper and then with silver. Since the precious-metal coating need be no more than a millionth of an inch thick, it would cost only $1.60 to line 1,000 quart-size cans with silver, according to Dr. Alexander Goetz of the California Institute of Technology. An alternate proposal suggests substituting bags of Pliofilm, a new synthetic material, for cans.

Parachutes made of Nylon, the Du Pont fiber made from coal, air, and water, have been tried out experimentally by the U. S. Army Air Corps and found to function perfectly. They may help to solve the problem of our dependence upon Japan for silk, of which standard ‘chutes are fashioned.

Fulminate of mercury, highly sensitive to the slightest shock, has a new rival for use in the detonators of shells and bombs. The substitute, a chemical called lead azide, keeps better and contains no mercury, so the liquid metal may soon be crossed off the roster of strategic materials. Other substitutes have been found for mercuric chemicals in less widely known usesâ€”making blue printing ink, dental rubber, and barnacle-repelling paint for ships’ bottoms.

Automobile tires of synthetic rubber, long talked about, now are being marketed in the United States. Instead of making it from coal, as Germany does, American chemists start with petroleum. Thus, miliitary vehicles may soon be rolling into battle on tires made from the same raw material that provides fuel for their carburetors. An $80,000,000 program for expanding experimental synthetic-rubber factories into big mass-production plants has already been initiated, the National Defense Advisory Commission reports.

But it takes precious months to develop mines and to get new factories into production. In a national emergency, could we do it in time? To tide us over that critical period while war industries are getting into high gear, the third and most immediately important part of our strategic-material program is being put into effect.

Gigantic piles of imported war metals and other supplies are being laid in by Government agencies, and stored on military reservations, “for fire use only.” Kept intact unless war comes, they would then be thrown into the balance, while new sources were catching up with military demands.

Beginning last year, the United States has been stocking up heavily on thirty-seven strategic and near-strategic materials. Its fast-growing reserve of manganese, intended to fill all wartime needs for a year, results from orders placed in India, Africa, Chile, and at home. The Anaconda Copper Company has contracted to furnish 80,000 tons a year for three years from its Emma mine in Montana. A rising pile of chromium results from orders placed first in Turkey and Alaska. Wherever possible, contracts have been awarded to foster development of United States and Western Hemisphere sources; at the same time, urgent needs must often be filled from far-away countries. Huge international cartels have contracted to furnish us nearly a year’s supply of vitally important rubber and tin.

Odd items appear in some of the ordersâ€”for instance, tons of quinine, to ward off disease if our soldiers operate in the tropics. Quartz crystals will be needed to keep radio transmitters on the right frequency; in an emergency, they could be flown by plane from Brazil, but the United States is forehandedly laying in plenty for storage.

Novel commercial arrangements have been concluded and are under negotiation. We wanted 85,000 tons of British rubber. The English wanted 600,000 bales of American cotton. It was a deal. Despite war difficulties, a large proportion of the rubber has been delivered. At this writing, the United States and Great Britain are working out a plan to store 200,000,000 to 300,000,000 pounds of British wool in this country, subject to purchase for the U. S. Army in case of war. Then it would be made into Army overcoats, and blankets.

So far the story has been of America’s weaknesses, and their cure. With these headaches off our mind, we can settle back and comfortably reflect on our strong points. No other country in the world can boast such an enviable assortment of natural resources at home.

Food, most essential of all raw materials in war or peace, isn’t one of our defense worries. We raise more than we eat of almost every important foodstuff from apricots to wheat. We won’t have to choose between cannons and butterâ€”we can have all we want of both. If war should come, mild rationing of sugar and coffee might be necessary. But our ability to import large quantities of both commodities from Latin-American countries, bordering on the Caribbean, probably would avert even that inconvenience.

Steel is the great essential of armament, and iron and coal are the principal raw materials used in steel-making. We have enormous reserves of both, and can easily mine enough to meet even the tremendous demands of all-out warfare.

War in the air, the use of oil as fuel for modern fighting ships, and mechanized warfare on land have combined to make petroleum an imperative military necessity. Our resources, greatest in the world, will fill all needs for oil and leave an ample supply for making synthetic products. Large stocks of the comparatively new 100-octane aviation gasoline are being accumulated and stored for Army and Navy air forces.

Besides these principal sinews of war, we have, or are sure of being able to obtain, virtually all the restâ€”copper, lead, nitrates, sulphur, magnesium, cotton, lumber, to mention only a few. With newly acquired reserves of the ones we have lacked, we are perfecting our armament on the economic frontâ€”where undeclared wars may be waged without firing a shot, and where battles may be decided before they are fought.

A tank car of petroleum may be worth a good many bombs, and a few shiploads of iron ore may prove as valuable as a whole squadron of planes, to a country less fortunately endowed with raw materials than our own. Conversely, the nation that has them in abundance is in a commanding position to bid for international advantages, and to wage war or put a brake on it.

The United States embargoes shipments of aviation gasoline outside the Western Hemisphereâ€”ostensibly to conserve our supply, but incidentally denying it to militant Japan. We lend China $25,000,000, to be repaid by future shipments of tungsten. As Japan gobbles up French Indo-China, America cuts off vital Japanese supplies of scrap iron for warships and armament. To make Brazil independent of Europe for heavy steel, U. S. experts and a $20,000,000 loan will help build the largest steel plant in South Americaâ€”freezing out Krupp, the great German armament concern, and other foreign interests.

In tense, dramatic moves upon the chessboard of international politics, raw materials will continue to make big news. Even in peace, America’s wealth in them plays a powerful strategic role. And in war, you can strike an enemy as effectively with a lump of manganese as with a bayonet.