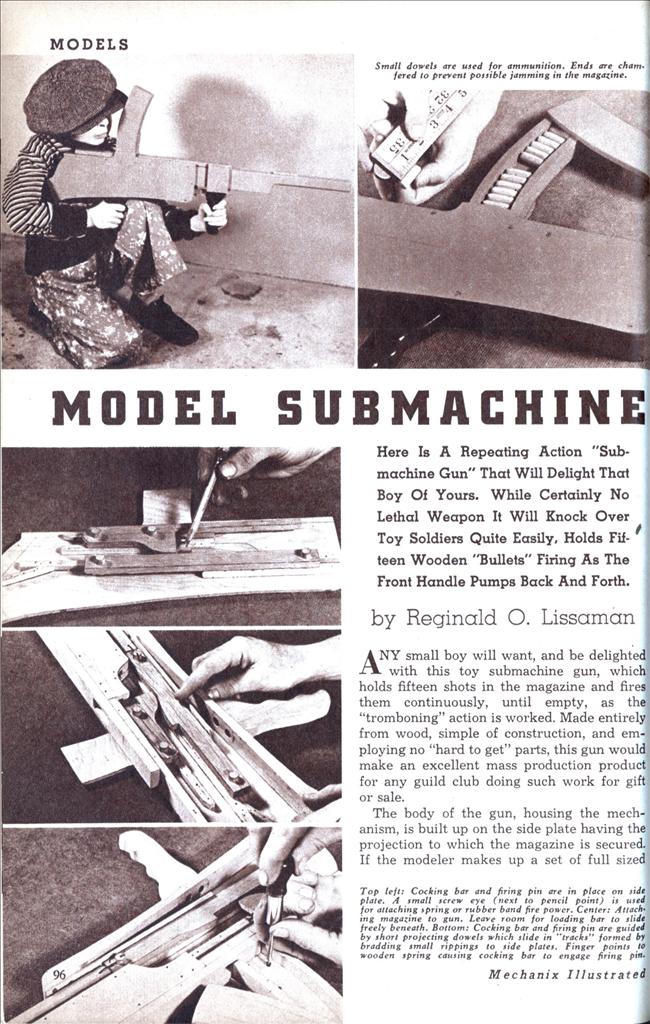 Here Is A Repeating Action “Submachine Gun” That Will Delight That Boy Of Yours. While Certainly No Lethal Weapon It Will Knock Over Toy Soldiers Quite Easily, Holds Fifteen Wooden “Bullets” Firing As The Front Handle Pumps Back And Forth.

ANY small boy will want, and be delighted • with this toy submachine gun, which’! holds fifteen shots in the magazine and fires them continuously, until empty, as the “tromboning” action is worked. Made entirely from wood, simple of construction, and employing no “hard to get” parts, this gun would make an excellent mass production product for any guild club doing such work for gift or sale.

The body of the gun, housing the mechanism, is built up on the side plate having the projection to which the magazine is secured. If the modeler makes up a set of full sized drawings of all the parts on light card or heavy paper and makes cut-outs from them, much of the fitting and adjusting may be done before actually cutting the parts, from wood. This minimizes the chance of error caused by working from small drawings.

The short dowels which project through the firing pin and cocking bar should slide freely, but not too loosely in the tracks formed by the small rippings, which are bradded and glued to the side plates. Punch pin holes through the full sized drawing of the side plates, at the exact location of these rippings so both plates are identical.

The barrel is made as shown in one of the photos, both sections being glued and bradded together. Avoid surplus glue that might foul the bore.

In the “tromboning” assembly, the box-shaped part immediately over the handle grip is made to slide freely over the barrel of the gun, plus a little extra clearance for the two coats of paint used in finishing. The mechanism is powered with two or three good weight office rubber-bands.

All in all construction is simple, as will be seen from a little study of the drawings and photographs. Should any trouble in operation be found, the cure will lie amongst the following.

Jamming In The Magazine This will occur if the gun is shaken enough to cause the “bullets” to drop down vertically, instead of horizontally. Cure: Swing cover open and re-stack the bullets.

Jamming In The Firing Chamber First be sure that sufficient room is allowed to permit the bullets to fall easily into place. If it is not cured by the above the trouble will probably be caused by the firing pin not being drawn back far enough to give the bullet time to drop completely into place. Cure: Shorten firing pin. If the barrel is made of soft wood the striking shoulder of the firing pin will bruise into the rear end of the barrel, having the effect of lengthening the firing pin. If such occurs it may be found necessary to provide something harder for the firing pin to strike on, such as a little piece of metal or hardwood block. However, if the barrel is made of hardwood trouble is unlikely. When the gun is used out-of-doors where excessive ammunition loss is likely, it is suggested that the “bullets” be not used, instead, peas or small stones should be used. This will necessitate single shot loading. Each individual shot should be placed directly into the firing chamber for single shot fire.

The simple but excellently working wooden mechanism will be a delight to the youngster who must see “why it works”—that is if Dad ever gets through playing with it.

Full sized patterns of the various parts can accurately be laid out in squares from the drawing below. Transfer patterns to wood and cut out.