Mechanix Illustrated
Issue: Dec, 1955
Posted in: How to
Tags: models
4 Comments on MODELS FOR MILLIONS (Dec, 1955) 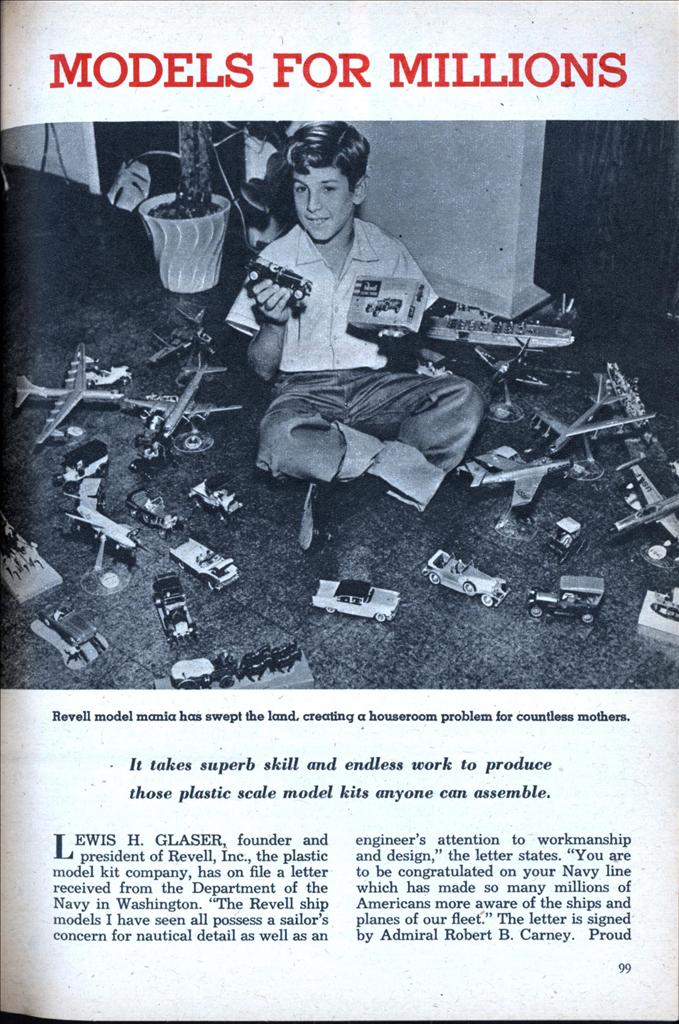 It takes superb skill and endless work to produce those plastic scale model kits anyone can assemble.

LEWIS H. GLASER, founder and president of Revell, Inc., the plastic model kit company, has on file a letter received from the Department of the Navy in Washington. “The Revell ship models I have seen all possess a sailor’s concern for nautical detail as well as an engineer’s attention to workmanship and design,” the letter states. “You are to be congratulated on your Navy line which has made so many millions of Americans more aware of the ships and planes of our fleet.” The letter is signed by Admiral Robert B. Carney. Proud Mr. Glaser, a one-time radio repairman, who turned retailer back in 1938, began manufacturing plastic objects in 1942. Today he’s riding high on the boom in, scale model kits. The authenticity that stirred the admiral to such high praise is a consistent characteristic of the four-year-old Revell line of kit models, which is slowly covering the entire history of transportation. You can buy and as- semble a Ben Hur chariot, a 1913 Maxwell, a model of the Mayflower, one of several antique carriages or fire engines. Whatever you buy you know it will be a scrupulous copy of the real thing and handsome in its own right. And after an hour or so of cementing you’ll set the finished job up somewhere with your crusty fingers, gaze at it proudly and think, “I made that!” •