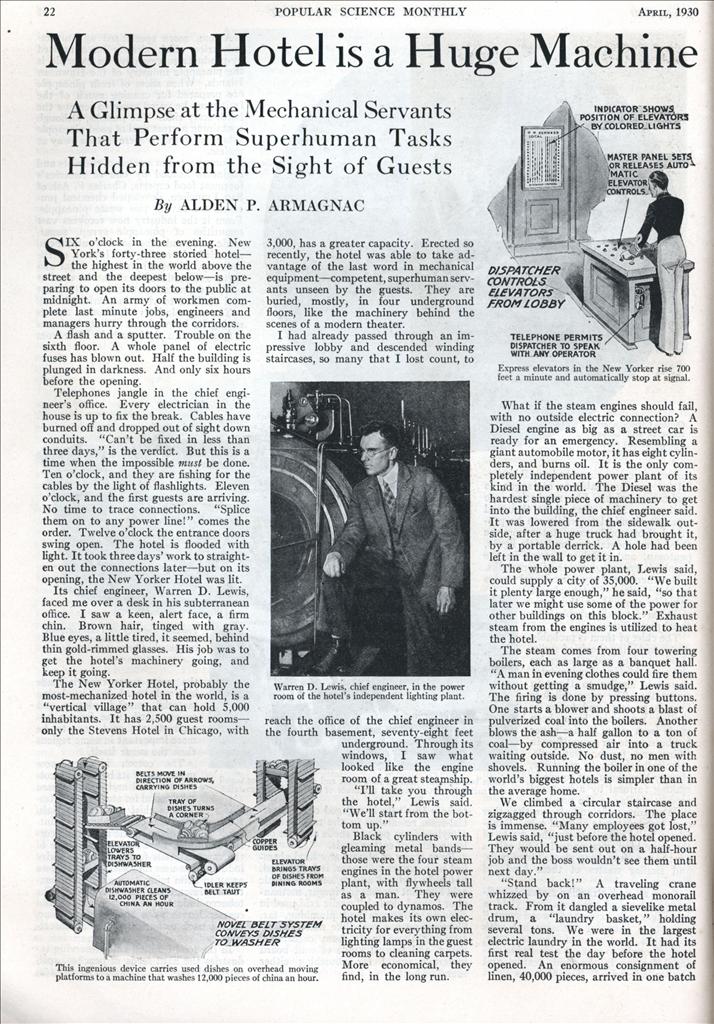 Modern Hotel is a Huge Machine

SIX o’clock in the evening. New-York’s forty-three storied hotelâ€” the highest in the world above the street and the deepest belowâ€”is preparing to open its doors to the public at midnight. An army of workmen complete last minute jobs, engineers and managers hurry through the corridors.

A flash and a sputter. Trouble on the sixth floor. A whole panel of electric fuses has blown out. Half the building is plunged in darkness. And only six hours before the opening.

Telephones jangle in the chief engineer’s office. Every electrician in the house is up to fix the break. Cables have burned off and dropped out of sight down conduits. “Can’t be fixed in less than three days,” is the verdict. But this is a time when the impossible must be done. Ten o’clock, and they are fishing for the cables by the light of flashlights. Eleven o’clock, and the first guests are arriving. No time to trace connections. “Splice them on to any power line!” comes the order. Twelve o’clock the entrance doors swing open. The hotel is flooded with light. It took three days’ work to straighten out the connections laterâ€”but on its opening, the New Yorker Hotel was lit.

Its chief engineer, Warren D. Lewis, faced me over a desk in his subterranean office. I saw a keen, alert face, a firm chin. Brown hair, tinged with gray. Blue eyes, a little tired, it seemed, behind thin gold-rimmed glasses. His job was to get the hotel’s machinery going, and keep it going.

The New Yorker Hotel, probably the most-mechanized hotel in the world, is a “vertical village” that can hold 5,000 inhabitants. It has 2,500 guest roomsâ€” only the Stevens Hotel in Chicago, with 3,000, has a greater capacity. Erected so recently, the hotel was able to take advantage of the last word in mechanical equipmentâ€”competent, superhuman servants unseen by the guests. They are buried, mostly, in four underground floors, like the machinery behind the scenes of a modern theater.

I had already passed through an impressive lobby and descended winding staircases, so many that I lost count, to reach the office of the chief engineer in the fourth basement, seventy-eight feet underground. Through its windows, I saw what looked like the engine room of a great stearnship. “I’ll take you through the hotel,” Lewis said. “We’ll start from the bottom up.”

Black cylinders with gleaming metal bandsâ€” those were the four steam engines in the hotel power plant, with flywheels tall as a man. They were coupled to dynamos. The hotel makes its own electricity for everything from lighting lamps in the guest rooms to cleaning carpets. More economical, they find, in the long run.

What if the steam engines should fail, with no outside electric connection? A Diesel engine as big as a street car is ready for an emergency. Resembling a giant automobile motor, it has eight cylinders, and burns oil. It is the only completely independent power plant of its kind in the world. The Diesel was the hardest single piece of machinery to get into the building, the chief engineer said. It was lowered from the sidewalk outside, after a huge truck had brought it, by a portable derrick. A hole had been left in the wall to get it in.

The whole power plant, Lewis said, could supply a city of 35,000. “We built it plenty large enough,” he said, “so that later we might use some of the power for other buildings on this block.” Exhaust steam from the engines is utilized to heat the hotel.

The steam comes from four towering boilers, each as large as a banquet hall. “A man in evening clothes could fire them without getting a smudge,” Lewis said. The firing is done by pressing buttons. One starts a blower and shoots a blast of pulverized coal into the boilers. Another blows the ashâ€”a half gallon to a ton of coalâ€”by compressed air into a truck waiting outside. No dust, no men with shovels. Running the boiler in one of the world’s biggest hotels is simpler than in the average home.

We climbed a circular staircase and zigzagged through corridors. The place is immense. “Many employees got lost,” Lewis said, “just before the hotel opened. They would be sent out on a half-hour job and the boss wouldn’t see them until next day.”

“Stand back!” A traveling crane whizzed by on an overhead monorail track. From it dangled a sievelike metal drum, a “laundry basket,” holding several tons. We were in the largest electric laundry in the world. It had its first real test the day before the hotel opened. An enormous consignment of linen, 40,000 pieces, arrived in one batch at eleven in the morningâ€” mostly sheets and pillow cases. All had to be laundered before they were used. Between one and two in the afternoon, the last piece was on its way up an “escalator” or moving runway that takes it to the linen room. In a working day the laundry can handle 130,000 pounds of linenâ€”a little more than its daily requirements. Bed and table linen make a hotel’s wash enormous. The New Yorker’s 52,000 sheets alone would cover thirty acres of ground. Through an open door we saw busy chefs cooking on the kitchen’s thirty-eight sectional gas ranges. In the bake shop was an automatic weigher, measuring out in- gredients from a hopper behind two electric ovens. We ducked beneath an overhead chute of gleaming copper. Trays of dishes glided along it, propelled by some unseen force, on their way to the dishwashing room. They switch around corners through an ingenious system of moving belts and enter the dishwasherâ€” a metal contrivance eight feet long that handles 12,000 pieces of china an hour.

“Diners don’t know what work goes on behind the scenes so that they may eat,” Lewis said. “There’s even more to it than this. A couple of unsung heroes worked fifty hours without sleep, not long ago, printing menus in the print shop”.

Emerging from the basements, we paused in the lobby. In a space surrounded by elevators marked “Local” and “Express,” an employee manipulated buttons on a control stand. He dispatches the elevators as a train dispatcher controls railway trains. Forty-three stories of “vertical traffic,” as Lewis called it, required special apparatus. Elevators level themselves automatically at the proper floors and doors swing open of their own accord. When a guest pushes a “down” button on the fourth floor, for example, the next elevator coming down automatically stops for him; the elevator operator has nothing to do with it. But if the dispatcher in the lobby sees from the number of stops revealed by a light indicator that one elevator is probably rilled, he can speed up traffic by a master control. It countermands the automatic devices and lets an elevator go by a normal stop. The dispatcher can talk by telephone with an operator, no matter where the elevator may be. The cars rise 700 feet a minute.

On the thirty-ninth floor of the hotel, higher up than any other in the world, is the telephone exchange, with ninety-five operators. But phones are not the only means of communication. A pneumatic tube, for instance, speeds the bill for your last minute telephone call downstairs so fast that it is waiting for you when you check out. Then there’s the telautograph, the device that reproduces handwriting at a distanceâ€”there’s one in Lewis’s officeâ€”to give written records of every request for repairs.

Every guest room has a radio. On the forty-first floor we saw the radio room. It might have been a large commercial receiving station. These “five are broadcast receivers,” explained Lewis. “The sixth is a powerful short-wave set to pick up European programs.” An operator sat at a panel longer than the room was high. He was operating the sixteen power amplifiers. In all, the room contained a hundred big radio tubes. In case an SOS should interrupt the radio programs, and the broadcasting stations be shut down to clear the way for a ship’s distress signals, two electric phonographs stand ready to fill in.

” Four of the receivers give the guest a choice of as many programs in his room,” Lewis said. ” Separate feeder lines run from each to every roomâ€”more than ten miles of wire in all. Another receiver gives radio programs through a public address system in the public rooms. In the banquet hall we have a unique deviceâ€” an ‘echo sound projector’ that gives music just loud enough to be heard, yet not to disturb conversation. It is the first time this has been applied in such a large hall.”

THE radio system had other innovations. The management could cut in on a program at any time to make important announcements to guests, either in their rooms or in the public halls. The hotel has leased land wires by which special events can be received and relayed to the rooms or public halls. “Annunciators,” proudly installed a century ago by the Tremont Hotel in Boston, were the forerunners of this modern mode of hotel communication.

“Now I’ll show you where all our engineering services come out,” Lewis said. He opened the door of a guest room, and we entered an inviting chamber furnished for two with a shower and bathroom adjoining. A modern, inclosed radiator was under the window. “One incident will give you an idea of the job of furnishing these rooms,” Lewis said. “Every one, according to hotels custom, must have a Bible. The New York Bible Society, which furnishes those for New York, delivered our order for 2,500 about ten days too late. In the meantime about a dozen guests had called up the office to ask where their Bibles were.”

I noticed the radio, a fifteen-inch cone speaker, in a corner. A switch allows the guest to make his choice of the four programs. There is even an automatic time switch to tune the radio to any desired program at a given hour. “The walls are soundproof,” Lewis explained. “Your neighbor’s radio won’t disturb you. And the maximum volume is controlled from the central receiving station.”

THE guest rooms, of course, were no less carefully engineered than the rest of the hotel. A compartment built into the entrance door allows a valet to deliver clothes without disturbing the occupant. As an outer door shuts, it operates a signal. The inner door can then be opened, and thus privacy is assured. Running ice water and other comforts are provided.

“What do you imagine pleases the guests most?” Lewis asked. After my tour of bewildering wonders I hesitated. The engineer smiled and pointed to a shiny metal gadget on the wall. “That little twenty-five-cent bottle opener and corkscrew, combined, makes more of a hit, if you’ll believe it, than some of our most ambitious engineering schemes. They think it’s wonderful, and ask where they can buy one like it or whether they can have an extra one as a souvenir. That’s human nature, I guess. The average man, when he turns on a light or opens a radiator valve, doesn’t think of the power plant below that supplies him light and heat. There’s far more to running a hotel than one ever sees in a guest room.”