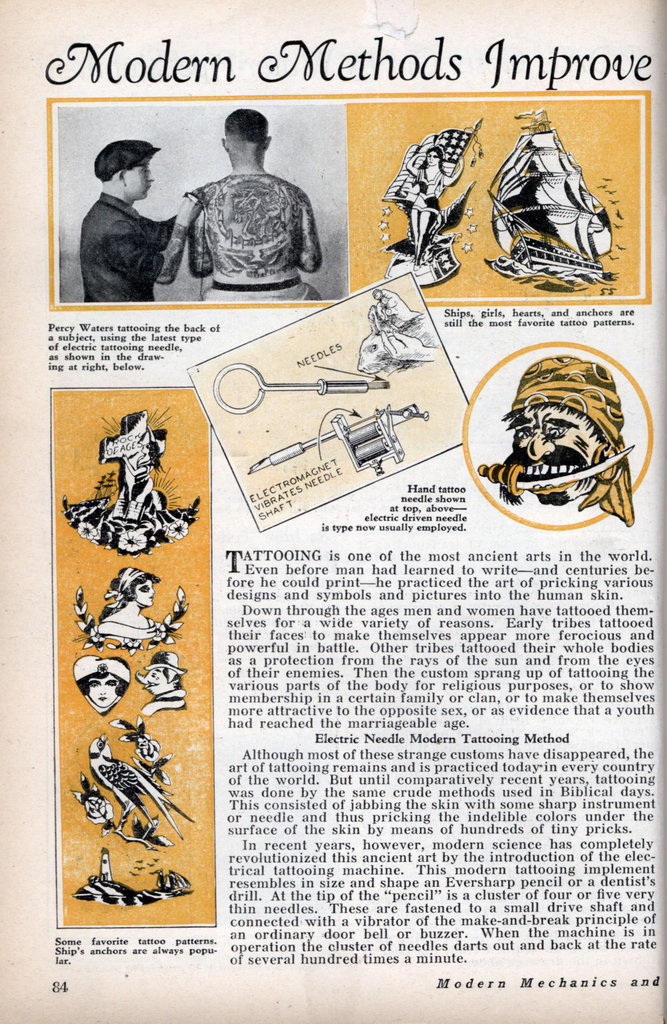 TATTOOING is one of the most ancient arts in the world. Even before man had learned to writeâ€”and centuries before he could printâ€”he practiced the art of pricking various designs and symbols and pictures into the human skin.

Down through the ages men and women have tattooed themselves for a wide variety of reasons. Early tribes tattooed their faces to make themselves appear more ferocious and powerful in battle. Other tribes tattooed their whole bodies as a protection from the rays of the sun and from the eyes of their enemies. Then the custom sprang up of tattooing the various parts of the body for religious purposes, or to show membership in a certain family or clan, or to make themselves more attractive to the opposite sex, or as evidence that a youth had reached the marriageable age.

Although most of these strange customs have disappeared, the art of tattooing remains and is practiced today in every country of the world. But until comparatively recent years, tattooing was done by the same crude methods used in Biblical days. This consisted of jabbing the skin with some sharp instrument or needle and thus pricking the indelible colors under the surface of the skin by means of hundreds of tiny pricks.

This electric tattooing machine in the hands of a skilled operator will draw a pattern in the skin with practically no pain to the customer and no drawing of blood. The needles do not go straight down like those of a sewing machine; a flexible spring allows them to “give” when they strike the skin, and the skin also yields a bit to allow the ink to be worked in just under the surface.

Thus modern science makes it possible for the tattooer to trace his pattern on skin just as he would draw on paper with a pencil. The tiny needles dart in and out so rapidly that there is no jagging or tearing of the skin. The customer feels no soreness after two or three days and the skin is completely healed up in about a week’s time.

Expert tattooers say that the speed of the needle is the most important detail of modern tattooing. After the arm has been prepared by shaving and washing it and the stencil has been put on by means of crayon sauce, the operator turns on the machine and listens attentively to the hum of the vibrating needles. He can tell by the feel of it whether the vibrations are right for clean, smooth work. Then he dips the needle into the color and draws the ink up into the instrument, and when the needle touches the skin this ink flows down and dyes the tissue just underneath the surface. A salve or ointment is put on as a final step and the skin is bandaged for a few days.

It is interesting to note that human skin varies greatly in thickness and tenderness. The skin of a young person is easier to tattoo on than that of an older person, and blondes are easier than dark-haired people. With the aid of the electrical machine, which is used by nearly every tattooer today, the work is done very rapidly on all customers.

It sometimes happens that after a dragon or anchor or bathing girl has been neatly tattooed on a man’s chest he changes his mind and decides that he would rather have a tombstone or a snake or a battleship. Our present-day science has not succeeded in solving this erasure problem very satisfactorily, for a tattoo mark is still a rather permanent fixture. Various methods are used to remove tattoo marks, but all of them leave a scar of more or less prominence.

Some tattooers inject acids or other chemicals into the skin and endeavor to bleach out the colors. Others peel or cut off layers of skin. But the most satisfactory method in this case is the oldest oneâ€”to cover up the old mark with a new design pricked on top of it.

This is frequently done in the case of boys and young men who have had their best girl’s initials tattooed on their arm or over their heart. When that particular young lady throws them over, they come back to the tattooer and have a “T” made into an “F”â€”or perhaps cover up the entire initial with a gorgeous coiled snake or a smoking Vesuvius panorama.

There is no evidence that tattooing is dying out or is on the decline today. It has flourished for several thousand years, and the modern scientific tattooing instruments seem to have given it a recent boost. One of the largest manufacturers of these present-day tattooing instruments is Percy Waters, who lives in Detroit, Michigan, and who furnishes tattooers all over the world with the supplies needed in this trade.

In Waters’ daily mail come orders from England and South Africa and Australia and the Orient. As a supplier of electric tattooing machines (of his own patented construction) and inks and needles and designs, Mr. Waters is confident that tattooing will never die out. He himself has been a tattooer for nearly a quarter of a century, and his correspondence keeps him in touch with tattooers in every part of the globe.

A letter recently received by Waters from England reveals the fact that tattooers in that country are making progress in the field of beauty tattooing. Permanent lipstick is applied and rouge for the cheeks and stencilled eyebrows. Similar to this type of work is the art of covering up bald spots with tattooed hair and of concealing ugly scars with a trim little design of one sort or another. Beauty shop operators at the present time are seriously studying the possibilities apparent in this field. It may be within a few years’ time that a generation of men and women will bloom forth with perfect complexions and perfect facial coloring at all times.

In this country, however, the most promising field for development today is found among fur breeders who need to mark their animals indelibly for identification, pedigree and age purposes. The large-scale fox ranches especially have found the electric tattooing needle an ideal instrument for this type of branding. Rabbits, goats, dogs and chickens are also being marked in this manner.

Portable machines are supplied so that the rancher can go right out to his farms and mark all his animals himself without incurring a great inconvenience or great expense. The most common place of tattooing animals is on the inside of the ear where the mark will always be a positive means of identification and description.

Scientists also are finding new uses for this ancient art. The University of Wyoming, College of Agriculture, wrote to Waters not long ago to find out whether areas about one-inch square could be accurately tattooed on a living sheep’s skin. They conceived this means of removing wool from such marked areas and studying it for fleece fineness and density.

Tattooers as a whole today are well content with their profession, due to the fact that the electric machine has made their work easier and more rapid and that new fields every year are opening up for their talents.

Occasionally some strange and unexplainable demands are made on the tattooer, as, for example, the customer of Waters who had him implant the outline of a whole skeleton down his entire body. Some men devote their chests or backs to such ambitious scenes as the resurrection of Christ or the details of a shipwreck or a famous battle. It is recorded that one woman a few years ago had her last will and testament tattooed on her back so that selfish, or unscrupulous relatives would be unable to contest it . . . Who knows? â€”perhaps not only the beauty shop operators and the fox ranchers and the jailers, but also the lawyers will soon be studying the art of tattooing!