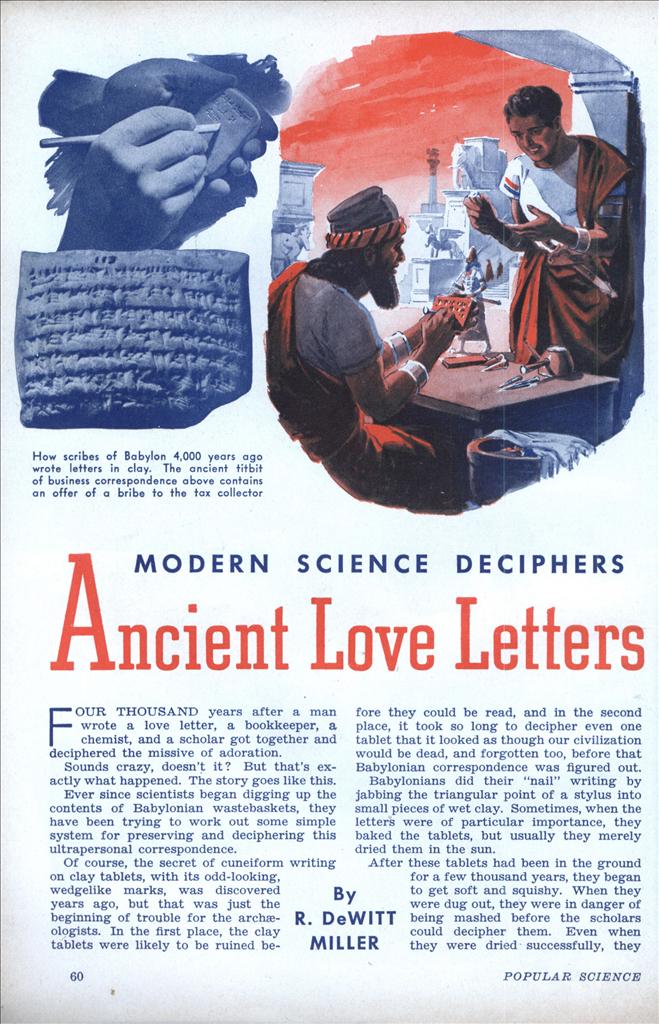 MILLER FOUR THOUSAND years after a man wrote a love letter, a bookkeeper, a chemist, and a scholar got together and deciphered the missive of adoration.

Sounds crazy, doesn’t it? But that’s exactly what happened. The story goes like this.

Ever since scientists began digging up the contents of Babylonian wastebaskets, they have been trying to work out some simple system for preserving and deciphering this ultrapersonal correspondence.

Of course, the secret of cuneiform writing on clay tablets, with its odd-looking, wedgelike marks, was discovered years ago, but that was just the beginning of trouble for the archaeologists. In the first place, the clay tablets were likely to be ruined be- fore they could be read, and in the second place, it took so long to decipher even one tablet that it looked as though our civilization would be dead, and forgotten too, before that Babylonian correspondence was figured out.

Babylonians did their “nail” writing by jabbing the triangular point of a stylus into small pieces of wet clay. Sometimes, when the letters were of particular importance, they baked the tablets, but usually they merely dried them in the sun.

After these tablets had been in the ground for a few thousand years, they began to get soft and squishy. When they were dug out, they were in danger of being mashed before the scholars could decipher them. Even when they were dried successfully, they were often covered over with mineral salts.

Then somebody thought of calling in a chemist. The chemist experimented with homemade tablets, and then came to the conclusion that it was possible to finish the Babylonians’ job for them. In other words, he devised a method whereby the tablets could be removed from the excavation, dried in the sun, specially packed, and finally baked in a modern electric furnace.

Next, the chemist fiddled with acids, and finally found that certain acids would remove the incrustation of salt without injuring the tablets.

But there still remained the problem of the slowness of translation. Now one of the biggest difficulties in this work was the fact that the Babylonians used so many signs that no normal scholar could carry them all in his mind. That meant endless time spent thumbing through the pages of reference books.

Recently, when he was getting tired of looking up Babylonian signs, Dr. Carl S. Knopf, of the University of Southern California, had an idea. He suddenly realized that the problem wasn’t one of archaeology, but of business efficiency.

So he consulted a bookkeeper, and together they worked out a visual index system by which the meaning of any sign could be found almost instantly.

Thus a combination of chemistry, bookkeeping, and scholarship has recently opened the door to the personal lives of people whose civilization lies deep beneath the desert sands.

On a tiny bit of clay a naive and baffled lover writes to his sweetheart: “To Bibea: May the gods for my sake preserve your health. Tell me how you are. I went to Babylon but I did not see you. I was greatly disappointed. Write me the reason for your leaving, and let me be cheered. For my sake keep well always. Gimil.”

But if Gimil’s love letter gives the impression of having been written today, many Babylonian commercial documents embody an anti-forgery technique which surpasses anything that modern civilization has ever been able to devise.

As it was—and still is—impossible to fit a new clay envelope on a tablet after it is dry, these documents were forgeryproof. If there were any question of the outer inscription having been tampered with, it was only necessary to break open the envelope and examine the inner tablet.

The Babylonians also had a unique method of solving the problem of how a generally illiterate population could sign the documents which were dictated to the scribes. The solution was “signature cylinders.”

These tiny cylinders of stone or shell, about an inch high, were carved with scenes from daily life. Each person had his own scene. To sign a document, it was only necessary to roll the cylinder over the wet clay, thereby impressing the scene. As the figures were cut in reverse, this custom probably represents the world’s first attempt at printing.

Among the endless pieces of Babylonian private correspondence, there is one which reads: “To the king my lord, your servant Ashur-Mukin has ordered me to transport in boats the colossal stone bulls. The boats are not strong enough and are not ready. But if a present be kindly made to us, we will see what can be done about it.”

It took 4,000 years and the help of modern science to bring that bit of graft to light.