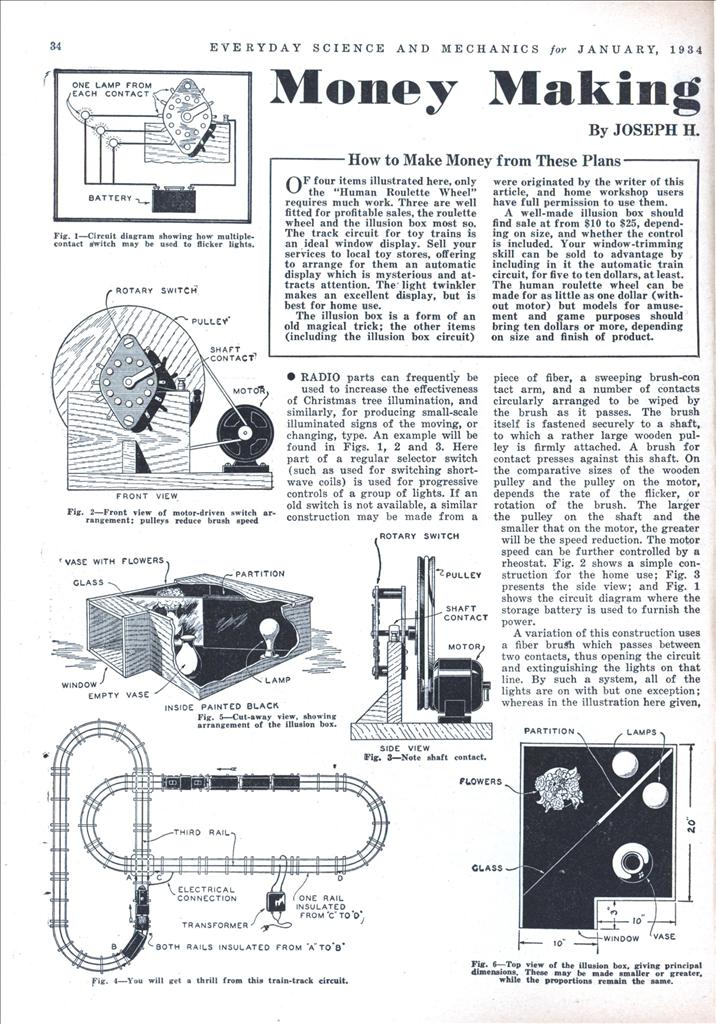 The illusion box is a form of an old magical trick; the other items (including the illusion box circuit) were originated by the writer of this article, and home workshop users have full permission to use them.

A well-made illusion box should find sale at from $10 to $25, depending on size, and whether the control is included. Your window-trimming skill can be sold to advantage by including in it the automatic train circuit, for five to ten dollars, at least. The human roulette wheel can be made for as little as one dollar (without motor) but models for amusement and game purposes should bring ten dollars or more, depending on size and finish of product.

• RADIO parts can frequently be used to increase the effectiveness of Christmas tree illumination, and similarly, for producing small-scale illuminated signs of the moving, or changing, type. An example will be found in Figs. 1, 2 and 3. Here part of a regular selector switch (such as used for switching shortwave coils) is used for progressive controls of a group of lights. If an old switch is not available, a similar construction may be made from a piece of fiber, a sweeping brush-con tact arm, and a number of contacts circularly arranged to be wiped by the brush as it passes. The brush itself is fastened securely to a shaft, to which a rather large wooden pulley is firmly attached. A brush for contact presses against this shaft. On the comparative sizes of the wooden pulley and the pulley on the motor, depends the rate of the flicker, or rotation of the brush. The larger the pulley on the shaft and the smaller that on the motor, the greater will be the speed reduction. The motor speed can be further controlled by a rheostat. Fig. 2 shows a simple construction for the home use; Fig. 3 presents the side view; and Fig. 1 shows the circuit diagram where the storage battery is used to furnish the power.

A variation of this construction uses a fiber brush which passes between two contacts, thus opening the circuit and extinguishing the lights on that line. By such a system, all of the lights are on with but one exception; whereas in the illustration here given, all lights are off except that to which the circuit is completed by the motor driven brush.

When the railroad track circuit, illustrated in Fig. 4, is properly set up, the short train stops until the long train clears the track. At the proper moment the short train dives across the intersections. However, the short train running on the shorter track may sometimes continue to run around its oval for half a dozen times without stopping. On occasion the trains are so close together that spectators will gasp while awaiting the crash, but the crash does not occur. Sometimes one train will nose out the other, sometimes barely clear the tail end. Everything depends on the length of the section A-B, the length of the section C-D, and whether one or two sections of rail are placed between A or C and the cross-over. In this track circuit, insulated tracks must be used; such as those used for operating signal systems, in which the center rail and one outside rail are insulated, are an absolute requisite. At the same time, insulated connections are used on both outside rails at points A and B, and on the insulated outside-rail section at points C and D. After the track has been set up, place the short train on the track, so that the engine is on the crossover, in the direction of travel. Apply current and allow the train to travel around the track at full speed. Naturally, when it reaches the track section between A and B there is no current on the outside rails: consequently, the train coasts to a stop. If the train, under its own momentum, continues across the insulated section AB, the length of this section must be increased to prevent this. Now, place the long train on the other track; it continues around until the circuit is closed from one outside rail, through the wheels of the car, to the other outside rail, and thence, through a short piece of wire, to section A-B. Now, the short train will start to get under way and will be operating at full speed at the time the last car passes the cross-over. While the insulator at C is shown near the cross-over, it is preferable to insert this either two or three sections away from the cross-over, so that the short train will not hit any of the cars of the longer train. Naturally, if the short train is equipped with a magnetic remote-control system, the system must be plugged or cut out entirely, to prevent the progressive selector from reversing the motor and thus making the train inoperative. It might also be suggested that this exact circuit need not be followed precisely, as long as the principle is used: thus, the trains could run on two ovals, one inside the other, with the shorter train crossing near the end of one of the oval sections. Signal lights may be cut into the circuit to operate directly from the trains and tracks, producing a more realistic effect. As mentioned originally, this layout is a positive attention-getter for a window display, uncanny in its performance and entirely automatic.

The “illusion box” illustrated in Figs. 5 and 6 is a simple, square, wooden box provided with a light, a diagonal partition, half of which is a sheet of glass (preferably plate) fitted into a dovetail in the partition, and a small framelike extension which projects 3″ from the opening. All dimensions for the construction are given in Fig. 6. An automobile bulb is fastened on either side of the partition; an empty vase is placed on one side of the glass, and one exactly similar, containing flowers, is placed on the other side. The inside of the box is painted a dull black. When the bulb in front is lighted, the rear one out, the reflection of the empty vase will be seen in the glass. When the front bulb is turned out and the back one lighted, the vase behind the glass will be visible. This elusive change from one vase to another can also be used for changing an empty box of cigars to a full one, a chicken to an egg, a dollar bill to a five-dollar bill, or any other conversion desired. Little more need be said about the construction. Reference to Fig. 7 will give the circuit for the control of the lamps, which employs an ordinary Christmas-tree flasher, two bells connected as shown, and the automobile lamps A and B (which may have to be of different candlepower). The circuit of an ordinary bell is completed from one binding post through the coils, thence to the contact, and back to the other binding post through the metal strip on the hammer. It is necessary that the wire from the magnet to the contact be cut.

The original toy illustrated in Figs. 8, 9, 10 and 11, is a small scale reproduction of the “Human Roulette Wheel” found at the seaside amusement resorts. A series of circular discs are caused to rotate in the directions indicated by the arrows; a celluloid doll, weighted with lead, slides down on the rotating discs and, after being tossed back and forth, finally bounces out through one of the openings. There is no way to predict where the doll will make its exit. The construction may follow the lines illustrated in Fig. 11. A large pie-pan is turned upside down; two phonograph discs, 12″ in diameter, are cemented together to form a pulley wheel. A bearing is soldered to the exact center of the under side of the pan (or tray); and the shaft, wheel and middle turntable are fitted in position. All turntables are 3″ in diameter, and may be of plywood, turned out to shape, or metal discs cut out of 3/16″ sheet iron. A shaft is fitted to each in the exact center. If the builder decides to use iron discs for the turntables, the friction drive shown in the upper right corner of Fig. 11 will serve. It has the advantage that any of the discs may be stopped by hand, with little danger of the fingers of a small tot being accidentally injured by the rotating pieces. However, if this toy is carefully finished, there is no danger of any such accident.

If wooden turntables are to be used in the construction, the most advisable method of drive is the belt. In this case, the shafts of the turntables extend through the bearings for a distance of one inch, and are fitted with small V pulleys. Two small pulleys are fitted to the driveshaft (the center turntable), and two cords run to the pulleys, in sets of three, as the diagram illustrates. A small toy or other motor drives the toy.

After this part of the construction has been completed, solder in the small fences, cut from strips of brass, and bent as shown in Figs. 9, 10 and 11. These fences are not more than an inch high, and serve to keep the dolls on the turntables for a greater length of time. In fact, if the openings are rather small, it is not unusual for the dolls to zigzag back and forth for as long as 15 minutes.

Any suitable chute is built, and so situated that the dolls will slide down and fall on the center turntable.

In order to convert this toy into an interesting game, each exit is painted a different color. The entire toy is given a coat of enamel, and the dolls must now be prepared. Small dolls about high are used to represent the people who normally form the cargo of the “Human Roulette Wheel.” While jointed celluloid dolls are preferred because of the antics of the tiny performers, others will answer just as well. Along the seam of the celluloid doll a cut is made, and a small quantity of lead shot inserted. The seam is then either cemented with a cement of acetone and celluloid, or cloth or a rubber band is used to close the opening. Small bits of cloth must now be sewed to the dolls; or the discs will merely slide under the weighted dolls and there is little action. The color of the cloth should match the color of the openings; six dolls should be prepared; and bets may be made at odds of 5 to 1 that the doll will not emerge from the colored opening assigned to it. The cloth produces sufficient friction to produce a lively toy, which never performs the same way twice in succession.