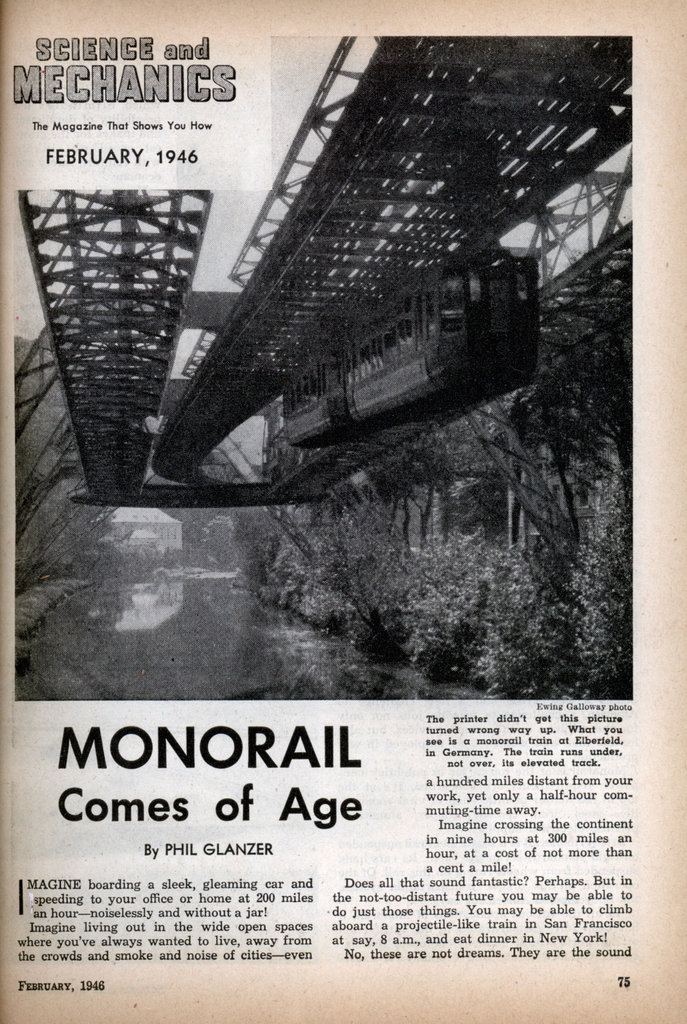 IMAGINE boarding a sleek, gleaming car and speeding to your office or home at 200 miles an hourâ€”noiselessly and without a jar! Imagine living out in the wide open spaces where you’ve always wanted to live, away from the crowds and smoke and noise of citiesâ€”even a hundred miles distant from your work, yet only a half-hour commuting-time away.

Imagine crossing the continent in nine hours at 300 miles an hour, at a cost of not more than a cent a mile!

Does all that sound fantastic? Perhaps. But in the not-too-distant future you may be able to do just those things. You may be able to climb aboard a projectile-like train in San Francisco at say, 8 a.m., and eat dinner in New York!

No, these are not dreams. They are the sound predictions of a group of engineers and industrialists who hold one of the most gigantic and thrilling of all post-war projects in their hands.

What is this project? Monorail. It is said to head the list on Washington’s startling agenda of after-war enterprises. Recently, former U. S. Secretary of the Treasury Henry Morgenthau said: “Monorail looks like the best single buffer against post-war depression that has come to my attention.”

Monorail would solve many problems of the post-war period. Primarily, it would solve the urban transit problem, one of our cities’ biggest headaches because of congested traffic conditions. It would also solve the problem of living too far from work. A hundred miles by monorail is comparable to 20 miles by existing methods of transportation.

But there is another vastly important angle to monorailâ€”post-war employment. Victory itself brings a new crisis and a new challenge to America, a challenge to provide jobs not only for the millions in the armed services, but also for the men and women once employed in war production.

Monorail is at the top as far as potential manpower requirements are concerned. It’s at the top in the matter of utilization of vital commoditiesâ€”steel, iron, cement, copper, aluminum, plastics, electrical supplies.

Briefly, monorail is a single steel rail suspended on rigid standards set in the earth. Its cars hang suspended from wheels riding on this rail. Of the operation of this unique transportation system, the Encyclopedia Americana says:

“In all the various applications of Monorail, it has been fully demonstrated to the satisfaction of the world’s most eminent engineers that for speed, comfort, safety and economy, it excels any other form of railway yet devised. Constructed on scientific lines, it is a system which eliminates the possibility of derailment and makes for the greatest speed obtainable with comfort, safety and economy.”

Monorail is not new, by any means. Europe has used it for many years and proved every claim made for it by engineers the world over. Glance at the record of a monorail line between Elberfeld and Vowinkel, in Germany.

Constructed in 1901, this line is today practically an antique, yet it has carried over more than a half billion passengers at speeds up to 125 miles an hour without a single fatal accident to anyone. It holds the finest service and income record of any transportation system in existence.

Many who have ridden on this line give assurance that there is positively no jar or vibration at any speed, and that it is almost impossible to tell when the train speeds around a curve, since its suspension, allowing free pendulum movement of cars, permits automatic banking on turns.

Monorail cars literally “fly through the air” above surface traffic. Cross-streets, peak hour crowds, snow, rain, fogâ€”none of these things presents an obstacle to monorail. You must either bore through the earth or move above it to escape slow-moving surface traffic.

We now have two existing methods of grade separationâ€”subways and elevateds. Subways cost from 3 to 11 million dollars a bore mile, and L’s from $866,000 to $1,118,000 a single track mile, and these costs do not include rolling stock, stations or other equipment. Compare those costs with the highest estimate for Monorailâ€”Â¦ $280,000 a mile, including all rolling stock, car barns and stations.

Why, if all these things are true, hasn’t Monorail been introduced into America long ago?

That’s easily answered. Surface line operatorsâ€” both steam and electricâ€”have thousands of miles of track crisscrossing the country, and tens of thousands of cars and locomotives. That represents a large investment. Rail executives have been too busy with the constant headache of keeping their systems in operation to think about another transportation “invasion,” considered dangerous to their investments. Motorcar makers have always frowned upon steam, or any other form of automotive power, for the same reason. There is one answer. But conditions are now changed. The demands of war and the resulting overloading of all public carriers have worn out thousands of cars and countless miles of roadbed. To replace these items, billions of dollars will be required. So it is no secret that several big railroads and electric lines are looking to monorail as the single solution to the costly dilemma facing them.

Famous engineers, industrialists and financiers all over the world visualize the widespread use of monorail systems within a few years. Zara Witkin, consulting engineer to the Soviet Union government construction trust, and engineer of the United States government records, says: “Monorail meets all traffic needs, clears the streets, eliminates danger and can be erected in less time and at less cost.”

It is proposed that the first line be built in California, between Los Angeles and Long Beachâ€”a distance of 30 miles through some of the heaviest traffic in America. Unless you fly it today, you’ll spend a full hour making the trip. Monorail will do it in 15 minutes!

We’re going to build a transcontinental line, too, engineers say. At an estimated cost of about 800 million dollars a monorail can be built utilizing the right-of-way of the Southern Pacific and Illinois Central Lines. This line will touch most of the important cities across the country, and bring the coasts within 10 hours of each otherâ€”at a transportation cost of less than one-fourth of air transport rates!

Monorail is noiseless in operation because its drive wheels have no flanges and there is no side-thrustâ€”the two unavoidable features that cause the clatter and jolting of surface rail cars.

The safety factors of monorail are not approached in any other vehicle. Surface trains can jump the track, collide with other trains, and run through open switches. Monorail cannot be derailed, according to its backers. A block signal and braking system, controlled by electronics, are said to make collisions impossible.

Monorail becomes the first dimension in the decentralization of the cities of the future. It means more than that. A rapid transportation system to outlying districts would bring about the sale of real estate now lying dormant, which in turn would bring about an improvement in the morale of householders and create a property owner and taxpayer out of many a transient tenant.

From the standpoint of public benefit, monorail is at the top. A cursory survey covering all the cities of the United States with a population of more than 100,000 inhabitants, indicates a potential demand for 7,390 monorail cars. This is based on one car for each 10,000 inhabitants. At an estimated cost of $20,000 a car, this represents 147 million dollars in the car-building business alone!

Monorail is not expected to jeopardize the financial position of any existing surface transportation system. It is public knowledge that before the war almost every urban transit line was operating at a loss. Now they have to spend millions repairing roadbeds and worn-out equipment. Present urban lines can be used for short hauls and as feeder lines to the monorail stations, which will speed up traffic, help to reduce accidents and expedite the progress of fire and police apparatus, backers of the scheme assert.