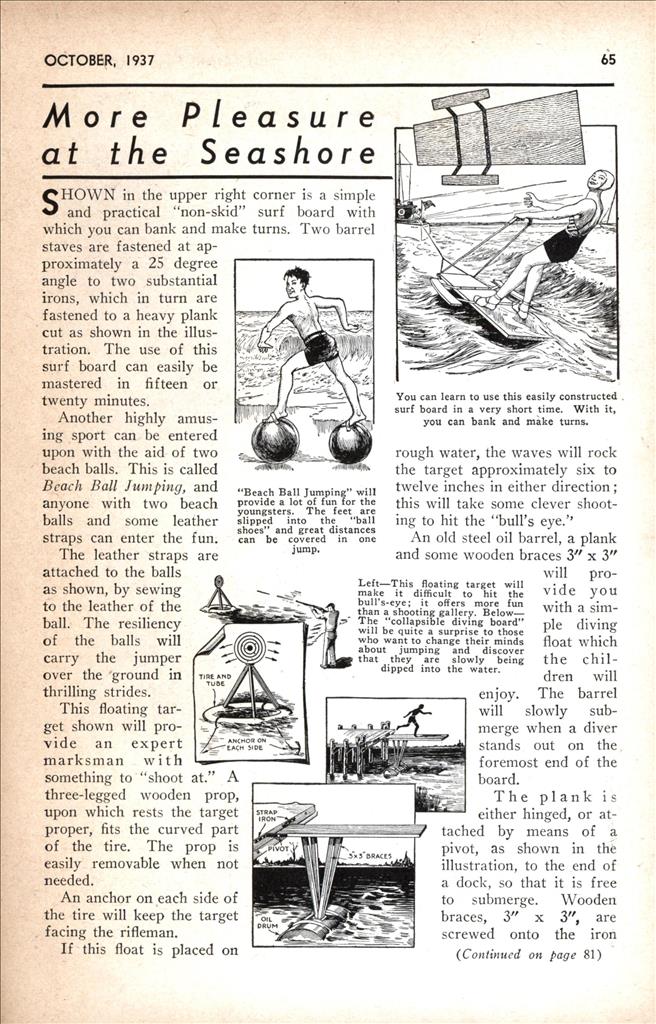 More Pleasure at the Seashore

SHOWN in the upper right corner is a simple and practical “non-skid” surf board with which you can bank and make turns. Two barrel staves are fastened at approximately a 25 degree angle to two substantial irons, which in turn are fastened to a heavy plank cut as shown in the illustration. The use of this surf board can easily be mastered in fifteen or twenty minutes.

Another highly amusing sport can be entered upon with the aid of two beach balls. This is called Beach Ball Jumping, and anyone with two beach balls and some leather straps can enter the fun.

The leather straps are attached to the balls as shown, by sewing to the leather of the ball. The resiliency of the balls will carry the jumper over the ground in thrilling strides.

This floating target shown will provide an expert marksman with something to “shoot at.” A three-legged wooden prop, upon which rests the target proper, fits the curved part of the tire. The prop is easily removable when not needed.

An anchor on each side of the tire will keep the target facing the rifleman.

If this float is placed on rough water, the waves will rock the target approximately six to twelve inches in either direction; this will take some clever shooting to hit the “bull’s eye.” An old steel oil barrel, a plank and some wooden braces 3″ x 3″ will provide you with a simple diving float which the children will enjoy. The barrel will slowly submerge when a diver stands out on the foremost end of the board.

The plank is either hinged, or attached by means of a pivot, as shown in the illustration, to the end of a dock, so that it is free to submerge. Wooden braces, 3″ x 3″, are screwed onto the iron barrel and attached to the under part of the plank at the angle shown. When once on this diving board the swimmer will get wet!