Life
Issue: Mar, 1970
Posted in: Advertisements
Tags: American Express
4 Comments on Most credit cards are given away. You must apply for The New Money. (Mar, 1970)

Most credit cards are given away. You must apply for The New Money. (Mar, 1970) 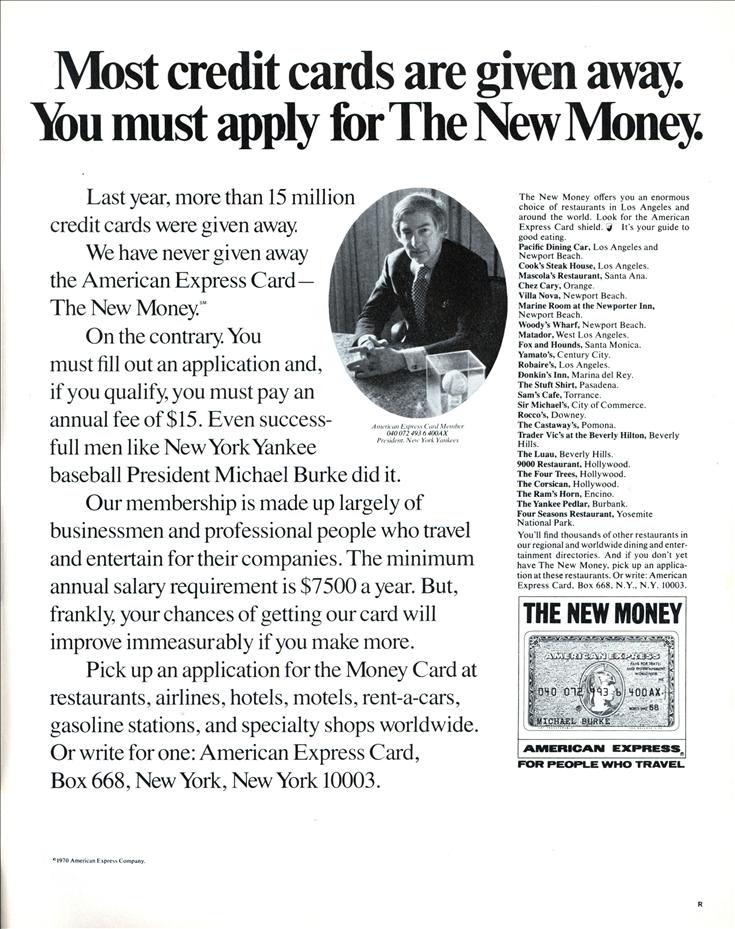 Most credit cards are given away. You must apply for The New Money.

Last year, more than 15 million credit cards were given away.

We have never given away the American Express Card— The New Money. ”

On the contrary You must fill out an application and, if you qualify, you must pay an annual fee of $15. Even success-full men like New York Yankee baseball President Michael Burke did it.

Our membership is made up largely of businessmen and professional people who travel and entertain for their companies. The minimum annual salary requirement is $7500 a year. But, frankly, your chances of getting our card will improve immeasurably if you make more.

The New Money offers you an enormous choice of restaurants in Los Angeles and around the world. Look for the American Express Card shield. 9 It’s your guide to good eating.

You’ll find thousands of other restaurants in our regional and worldwide dining and entertainment directories. And if you don’t yet have The New Money, pick up an application at these restaurants. Or write: American Express Card, Box 668, N.Y., N.Y. 10003.

FOR PEOPLE WHO TRAVEL