Seems kind of like cheating when you send ahead the trucks full of gasoline. 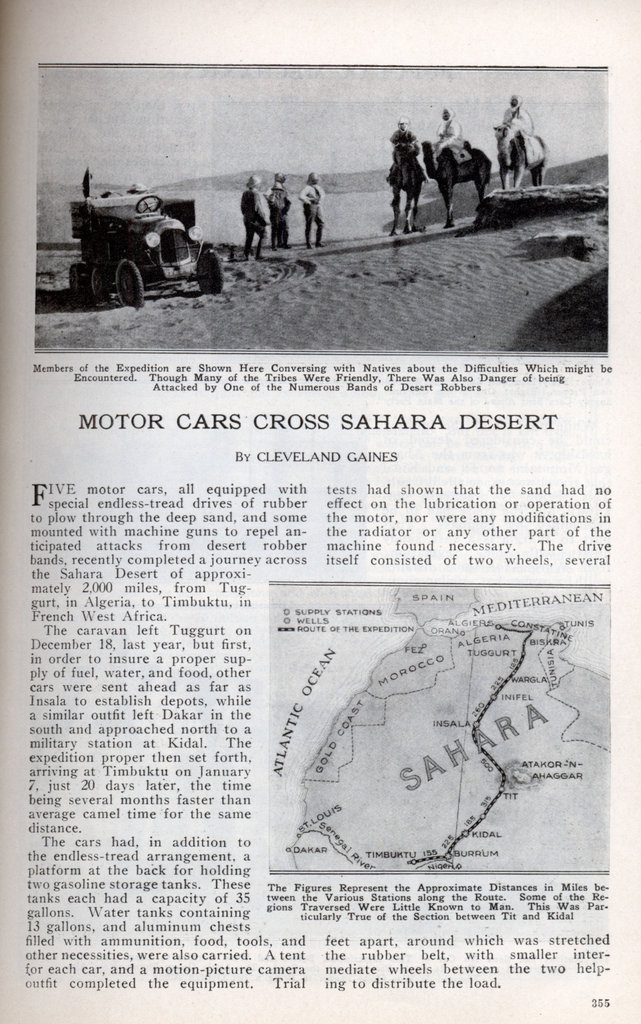 FIVE motor cars, all equipped with special endless-tread drives of rubber to plow through the deep sand, and some mounted with machine guns to repel anticipated attacks from desert robber bands, recently completed a journey across the Sahara Desert of approximately 2,000 miles, from Tug-gurt, in Algeria, to Timbuktu, in French West Africa.

The caravan left Tuggurt on December 18, last year, but first, in order to insure a proper supply of fuel, water, and food, other cars were sent ahead as far as Insala to establish depots, while a similar outfit left Dakar in the south and approached north to a military station at Kidal. The expedition proper then set forth, arriving at Timbuktu on January 7. just 20 days later, the time being several months faster than average camel time for the same distance.

The cars had, in addition to the endless-tread arrangement, a platform at the back for holding two gasoline storage tanks. These tanks each had a capacity of 35 gallons. Water tanks containing 13 gallons, and aluminum chests filled with ammunition, food, tools, and other necessities, were also carried. A tent tor each car, and a motion-picture camera outfit completed the equipment. Trial tests had shown that the sand had no effect on the lubrication or operation of the motor, nor were any modifications in the radiator or any other part of the machine found necessary. The drive itself consisted of two wheels, several feet apart, around which was stretched the rubber belt, with smaller intermediate wheels between the two helping to distribute the load.

While no part of the journey could be considered devoid of hardship, it was from the Ahag-gar Mountains to Tit and Kidal that travel was especially difficult. This region is practically unknown, and the route had to be determined by compass. Tug-gurt to Wargla is a vast, sandy desert with some vegetation; from Wargla for some distance south, a somewhat similar country, then for miles there is nothing but barren desert until the Ahaggar Range is reached. After that comes the ”great unknown,” also called the “land of thirst,” and finally more sandy stretches with occasional vegetation, to Burrum on the Niger, and Timbuktu.

One of the principal reasons for the trip was to determine whether or not the cars would be practicable for desert travel, though data of-a scientific nature were also collected.