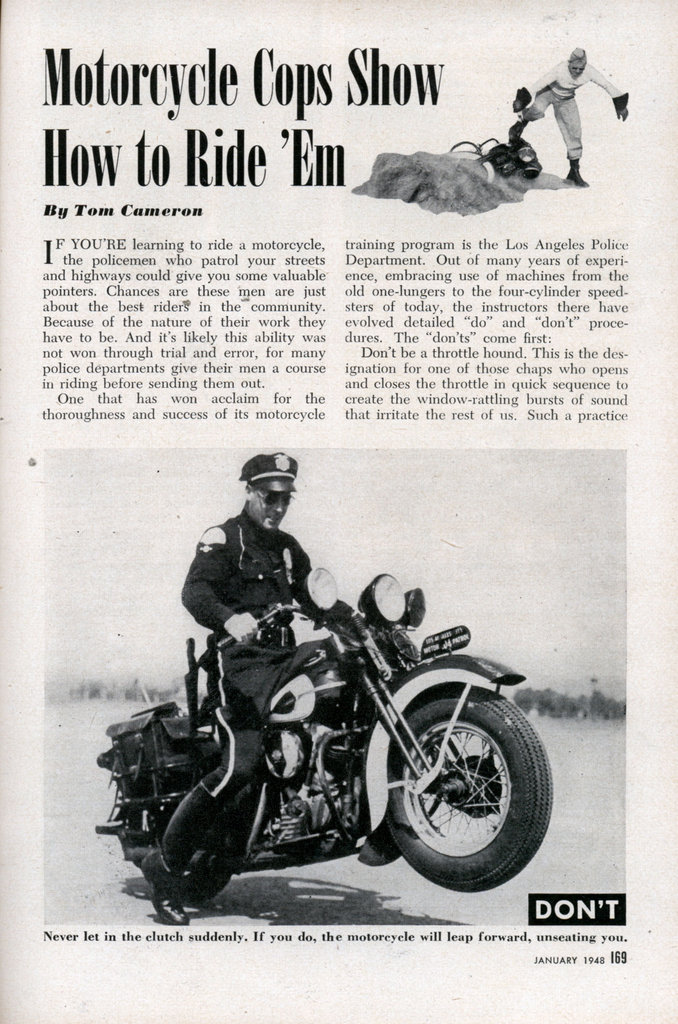 IF YOU’RE learning to ride a motorcycle, the policemen who patrol your streets and highways could give you some valuable pointers. Chances are these men are just about the best rider? in the community. Because of the nature of their work they have to be. And it’s likely this ability was not won through trial and error, for many police departments give their men a course in riding before sending them out.

One that has won acclaim for the thoroughness and success of its motorcycle training program is the Los Angeles Police Department. Out of many years of experience, embracing use of machines from the old one-lungers to the four-cylinder speedsters of today, the instructors there have evolved detailed “do” and “don’t” procedures. The “don’ts” come first:

Don’t be a throttle hound. This is the designation for one of those chaps who opens and closes the throttle in quick sequence to create the window-rattling bursts of sound that irritate the rest of us. Such a practice is hard on the motor, causes backfires, and damages the valves, wristpins, rings, and the bearings.

Don’t forget to put the sidestand in retracted position before starting the engine. The stand has a knuckle that keeps it extended. If you try to make a left turn with the stand sticking out, you may be dumped.

Don’t let in the clutch suddenly. If you do, and open the throttle at the same time, your steed may unseat you.

Don’t try to turn left with your left knee inside the handlebar. This locks you in. You might not be able to disengage the clutch, and you may lose control.

Don’t ride double in such a way that you must sit forward on the seat to accommodate the passenger. This also locks you in.

Don’t try to “rack up” your motorcycle when parking. This means turning out and sliding the rear end around to haltâ€”you hope â€”at right angles to the curb or parallel to another motorcycle. If the rear wheel hits an oil spot, scrap of paper, a patch of sand, or a puddle, you may crack up.

When stopping for more than a minute or two, switch off the engine. It’s air-cooled, and if permitted to idle it will heat upâ€”as well as run down the battery.

Keep both hands (particularly the throttle hand) well forward on the hand grips. This gives better control and increases stability. If you’re caught out in the rain, stop long enough to deflate your tires from their normal 18 lb. to about 12 lb. This decreases the danger of skidding. If you must ride through sand, turn only a few degrees at a time. Don’t lean, or you will spill.

Watch every car driver like a hawk. There are blind spots where he can’t see youâ€”as the accompanying chart shows.