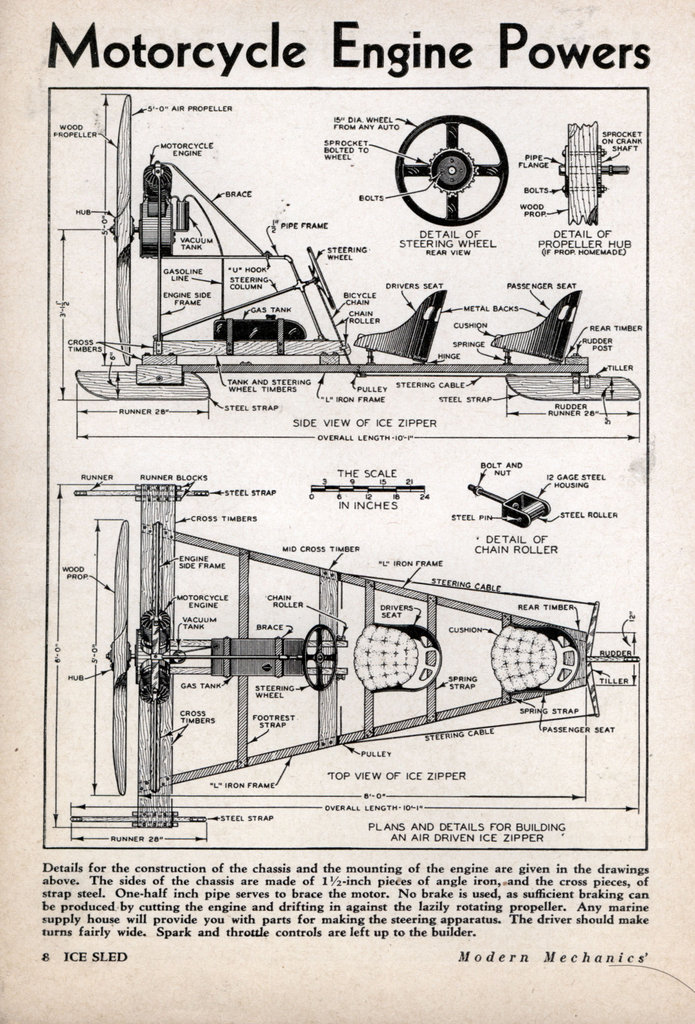 There are few thrills equal to that of speeding over the frozen surface of a long lake in an air-driven ice sled. Utilizing an ordinary two-cylinder motorcycle engine you can easily construct this 50-mile-an-hour Ice Zipper and get the most exhilarating sensation known outside of actual flying.

HERE you areâ€”you air-minded gang! A real speed wagon for use on a long, hard frozen lake. With one of these Ice Zippers you can get all the thrills of flying over the ice while hanging close to ground level. All you need is a high speed motorcycle engine, an air propeller and the mechanical ability to assemble the chassis and put the outfit in tune. With a motor capable of developing 1000 R.P.M., forty to fifty miles speed can be easily realized, and when you see the ice slipping under you at that rate you will know you are going some.

First, let’s tackle the construction of the chassis, which is shown in Fig. 1. This is triangular in shape and eight feet long. The sides are composed of two pieces of 1-1/2-inch pieces of angle iron separated 5 feet at the front and one foot at the rear. Bolt a 2×6 plank across the front ends and a shorter piece across the rear, with ends tapered to suit the angle. Then bolt a second timber, made from 2×4 stock on edge along the center of the first front plank, using long bolts at frequent intervals to give strength to these two cross timbers. The lengths of these timbers are shown in the drawings.

The engine frame is composed of two nearly upright pieces of angle iron bolted to the center of the top cross timber and separated so as to be slightly farther apart at the bottom than at the top. They are braced by two tie rods crossed near their centers. The top ends should be cut out to fasten securely, with lag bolts, to the crank case of the engine. The engine itself is a two-cylinder motorcycle engine of sufficient power and speed for this purpose. A four-cylinder engine can be used nicely instead and will run steadier and smoother, but the corresponding support and bracing system will have to be worked out differently by the builder.

A brace in the form of a steel strap is bolted across the two cylinder heads, and then from each head a side brace of 1/2-inch pipe fashioned to lead down to the ends of the top cross timber. Each end of the pipes is flattened and drilled for bolts so that these side frames can be bolted to the cylinder heads and ends of the timber. The engine is now held vertically and from the sides. The rear pipe frame takes up the end thrust and acts as a support for the steering wheel.

This part is composed of half-inch pipe about the size shown. Flatten the end of a piece and bolt to the under side of the engine crank case. Add a 45Â° fitting, and then, by a nipple, Tee, long nipple and marine flag pole flange, make the rear vertical assembly slanting as shown. Tie the top of the engine to this horizontal pipe by a round iron rod bolted to the center of the cylinder head strap and to the pipe by the U clamp shown in Fig. 2. By this means, the exact vertical lineup of the propeller can be adjusted.

Two pieces of 2×3 about 3 ft. 6 in. long should then be bolted against the rear face of the top cross timber and run back parallel and four inches apart to bolt to a second wooden cross timber, called the mid-cross timber. Bolt the frame flange to a block bolted between these two parallel timbers. Also mount a motorcycle gas tank to these timbers with straps and bolt a steel strap across the frame under them for a foot rest for the driver. A vacuum tank is mounted on a shelf on the rear of the engine and the gas line led down to the tank outlet.

The seating capacity is taken care of by procuring two old bucket seats from an old style racing car or plane and mounting them on cross steel straps as illustrated. The rear of the seats can be hinged to one strap, and the front supported at an angle by a small spring placed between the seat bottom and a second cross strap. Springs taken from a baby carriage give ideal resiliency for this purpose. The front seat should be placed’ just back of the tank timbers and the rear seat about the position shown in the drawings. The foot rest for the rear passenger can be the spring strap of the driver’s seat.

The runners can be made from any hard wood of 1-inch thickness. They are 2 ft. 4 in. long; the two front runners being 6 inches wide and the rudder five inches wide. Shoe them with half round steel and file to a sharp V edge, countersinking all screw heads. Pivot the two forward runners just back of the centers and 1-1/2 inches below the top edge. Bolt two runner blocks as shown under the ends of the 6-ft. cross timber, separated just enough so that the runner will oscillate between them. Use a heavy bolt for a pivot and grease it well before assembling. The runner is pivoted between the halves of the split end of a length of 1-inch pipe. It should work free but not loose enough to wobble. Run the pipe up through a hole in the center of the rear wood cross timber and assemble with washers above and below to bear against the wood and take up all undue play. This rudder post should work fairly stiff but free enough to turn without binding.

The steering control is shown in Figs. 1 and 2. It consists of an automobile steering wheel and shaft run down through the Tee in the rear engine frame, where its lower end rests in a socket on the front top cross timber. Any marine hardware company can furnish a suitable fitting to answer to such a socket. Bolt a motorcycle sprocket to the front of the steering wheel spider. Then run a chain over the sprocket and down through two rollers fastened to the rear ends of the tank timbers. Allowing enough chain for operation, fasten a wire cable to each end of the chain and run these lengths through pulleys attached to the under part of chassis side frame and to each end of the tiller. Adjust chain and cable until all possible slack is taken up. Also adjust rollers and pulleys until undue friction is eliminated.

Much of the speed and the ice-worthiness of the craft will depend upon the type of propeller used with your particular engine. For a two-cylinder engine of usual motorcycle horsepower and developing about 1000 R.P.M., an air propeller from four and one-half to five feet long with a four-foot pitch will be found about right. You can make your own or buy one as desired, although the manufactured kind will probably be found to be the most practical. If home-made, glue and screw 6-inch pine or spruce boards together until a 4-inch section is procured and then carve carefully to shape. For this homemade type, the mounting is shown in detail. Center it carefully after mounting and obtain a balance by carving away the> extra weight.