Modern Mechanix
Issue: Aug, 1931
Posted in: General
No Comments on Motorcycles of the Air May Give Wings to All (Aug, 1931) 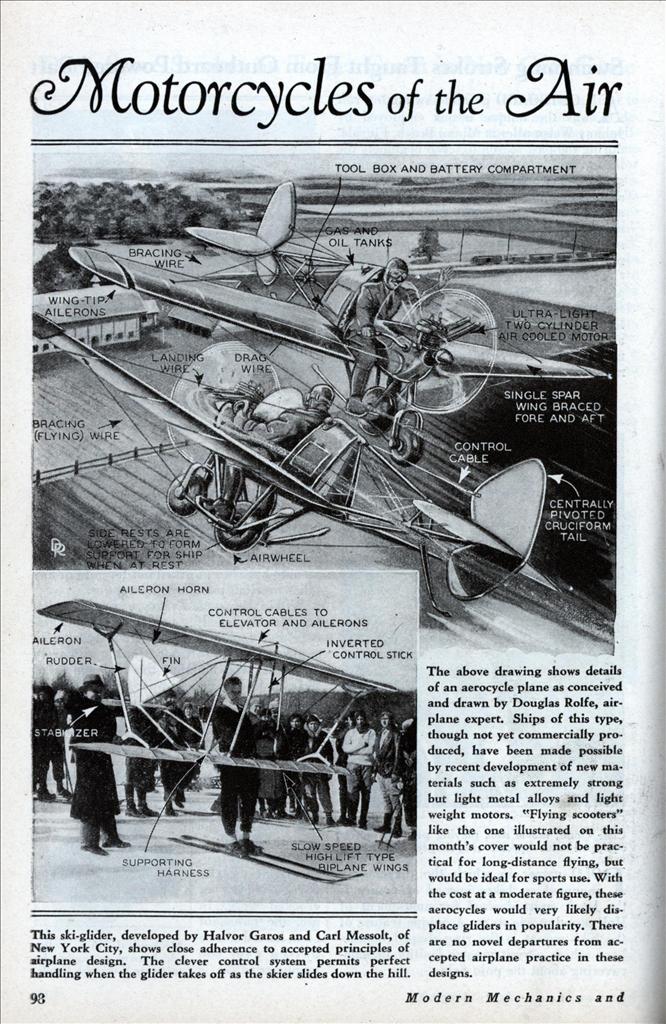 Motorcycles of the Air May Give Wings to All

SINCE the very beginning of aviation the alluring idea of an aerocycle or motorcycle of the air, such as is shown on this month’s cover of Modern Mechanics and Inventions, has appealed to countless inventors, none of whom have to date succeeded in perfecting a craft of this type. But today, for the first time in history, the development of light motors and alloys has progressed to such a degree that the problem of building an aircycle plane is greatly simplified, so it is safe to predict that within a short time a light plane built along the lines of those shown in Douglas Rolfe’s drawing on the opposite page will be commercially produced.

Indeed, as shown in the photograph herewith, a cycle plane already has been successfully designed and flown by Johann Franz, a Czechoslovakian inventor. A tow rope of the type used in launching gliders assisted in the take-off of the cycle plane, “but once in the air it skimmed along with its propeller turning over under power of its motorcycle engine. Mr. Franz patented his plane in the United States in January of this year, and is now refining its design. Perhaps this novel aerocycle will be the germinal idea out of which will develop the flying flivver of which we have heard so much, which will bring aerial transportation within the means of the average man.

There have been other instances in which ships which may be said to fit into this class have been built and flown, though with indifferent success. Notable examples include the early Santos Dumont Demoiselle, affectionately known as the “Infuriated Grasshopper” by reason of its general tendency to make successive hops rather than sustained flights; and, more recently, the De-Pischoff biplane, a French creation of extremely small wing spread which was not a success because it was so designed that the pilot’s body blanketed the control surfaces.

For long flights or navigating in heavy weather larger and more protected types of aircraft will of course be indispensable, but for the sportsman who wishes to get somewhere in a hurry the ultra-light plane may yet become a common necessity.

The illustration on page 98 presents features of such a plane as conceived by Douglas Rolfe, a flying artist whose war experience as a flyer with the Royal Air Force of the British Army and his intimate post-war association with some of the most competent airplane engineers in the country lends weight to his opinions. The illustration, of course, shows only the essentials of a type of plane which would lead gliders in popularity were it obtainable by the young enthusiast at a moderate price.

The ultimate development of such a light single-seater craft will point toward an all-metal plane weighing not more than 250 pounds, the abolishment of fixed stabilizing surfaces in the rear, single airwheel landing gear and stamped dural construction throughout. The greatest single problem confronting designers and engineers before such a craft can be safely produced and sold is the development of a wing construction and mechanism which will permit the angle of incidence to be varied to suit the constantly changing conditions of flight. This is a problem which today is engaging the minds of the best aeronautical engineers in the country.

Airplane wings attached to the human body have recently become popular with skiers, who, in skimming down a steep slope, develop sufficient speed to take to the air in much the same fashion as a glider. Of course, such flights are necessarily short, but intensely thrilling to the pilot.

An application of the airplane idea to a bicycle is illustrated on this page. The “Glide-O-Bike” is the invention of Harry T. Nelson of Dallas, Texas, and is intended purely for the amusement of young riders. The wing and tail units of the device can be attached to a bicycle frame in a few moments. When the rider pedals into the breeze the lift developed by the wing in front of the handle bars lifts the front wheel of the bicycle from the road, giving much the same sensation as flying. Lateral stability is attained through the use of dihedral.