I think this might be the expedition in which George Mallory and Andrew Irvine disappeared. 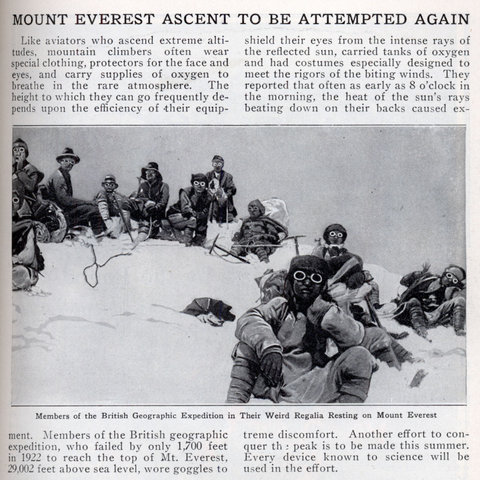 MOUNT EVEREST ASCENT TO BE ATTEMPTED AGAIN
Like aviators who ascend extreme altitudes, mountain climbers often wear special clothing, protectors for the face and eyes, and carry supplies of oxygen to breathe in the rare atmosphere. The height to which they can go frequently depends upon the efficiency of their equipment. Members of the British geographic expedition, who failed by only 1,700 feet in 1922 to reach the top of Mt. Everest, 29,002 feet above sea level, wore goggles to shield their eyes from the intense rays of the reflected sun, carried tanks of oxygen and had costumes especially designed to meet the rigors of the biting winds. They reported that often as early as 8 o’clock in the morning, the heat of the sun’s rays beating down on their backs caused extreme discomfort. Another effort to conquer the peak is to be made this summer. Every device known to science will be used in the effort.