The Merchandise Mart building is still there, huge as ever. Check out these shots from Google and Microsoft. 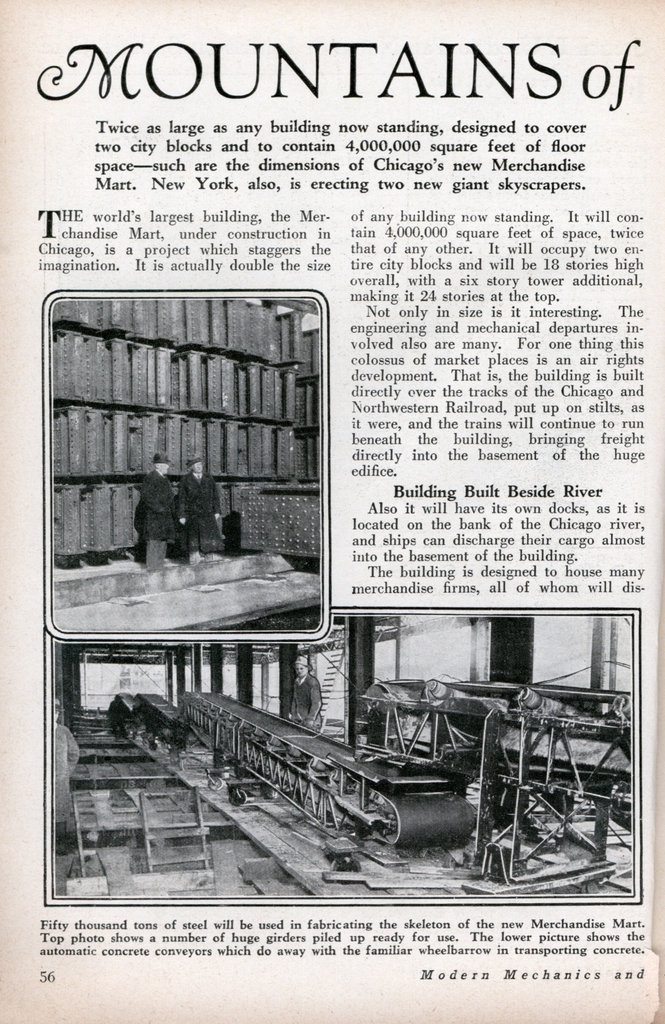 Mountains of Brick and Glass

THE world’s largest building, the Merchandise Mart, under construction in Chicago, is a project which staggers the imagination. It is actually double the size of any building now standing. It will contain 4,000,000 square feet of space, twice that of any other. It will occupy two entire city blocks and will be 18 stories high overall, with a six story tower additional, making it 24 stories at the top.

Not only in size is it interesting. The engineering and mechanical departures involved also are many. For one thing this colossus of market places is an air rights development. That is, the building is built directly over the tracks of the Chicago and Northwestern Railroad, put up on stilts, as it were, and the trains will continue to run beneath the building, bringing freight directly into the basement of the huge edifice.

Also it will have its own docks, as it is located on the bank of the Chicago river, and ships can discharge their cargo almost into the basement of the building.

The building is designed to house many merchandise firms, all of whom will display their wares together for out-of-town buyers. Marshall Field & Co., the great Chicago department store, sponsors the project and will be the largest tenant.

To build this structure above the railway tracks it was necessary to sink 458 reinforced concrete caissons, extending from 80 to 100 feet below street level. Another novel engineering feature is the fact that these caissons are spread at the bottom.

More than 50,000 tons of steel will be used in construction of the building. It will have 5,500 windows, requiring 132,000 square feet of glass. There will be also more than six miles of plate glass used for display windows in the corridors.

To light the building 30,000 lighting fixtures will be required, necessitating the use of 380 miles of wire.

Many clever mechanical devices were brought into play in the building of such a huge project. For one thing a special boat was designed which pulled up along the site and shot, by means of compressed air, 2,000,000 lbs. of cement from the boat to the giant hopper in the mart. This naturally-saved thousands of labor hours.

Another labor saving device, which did away with the old wheel barrow in pouring concrete, was a conveyor, automatic, which carried the concrete from one part of the building to another, where it was dumped and used. Underneath the building the railroads will operate a freight station, just to take care of the goods shipped in and out.

Chicago, however, is by no means alone in the erection of huge new buildings. Both the Chrysler building and the Bank of Manhattan building are being built now in New York. The Chrysler building will be 879 feet above street level, and from the observation platform on the top of its 65 stories spectators will be able to view the country for more than 100 miles. The elevators in the building will constitute the highest vertical transportation system in the world. The Bank of Manhattan building will be 840 feet high.

In connection with these newest of skyscrapers, it is interesting to note that the inventor of the principle which makes them possible is only now receiving the first royalties on his patent. He is Leroy S. Buffington, 80-year-old inventor of Minneapolis, Minn., who 48 years ago invented the principle involving a braced skeleton of steel with shelves fastened to the skeleton at each story to support a masonry veneer. Mr. Buffington’s patents have long since expired, but he has received a check for $2,250 from Rufus R. Rand, builder of the Rand building in Minneapolis, who believed that the royalty was the just due of Mr. Buffington as the father of the American skyscraper.