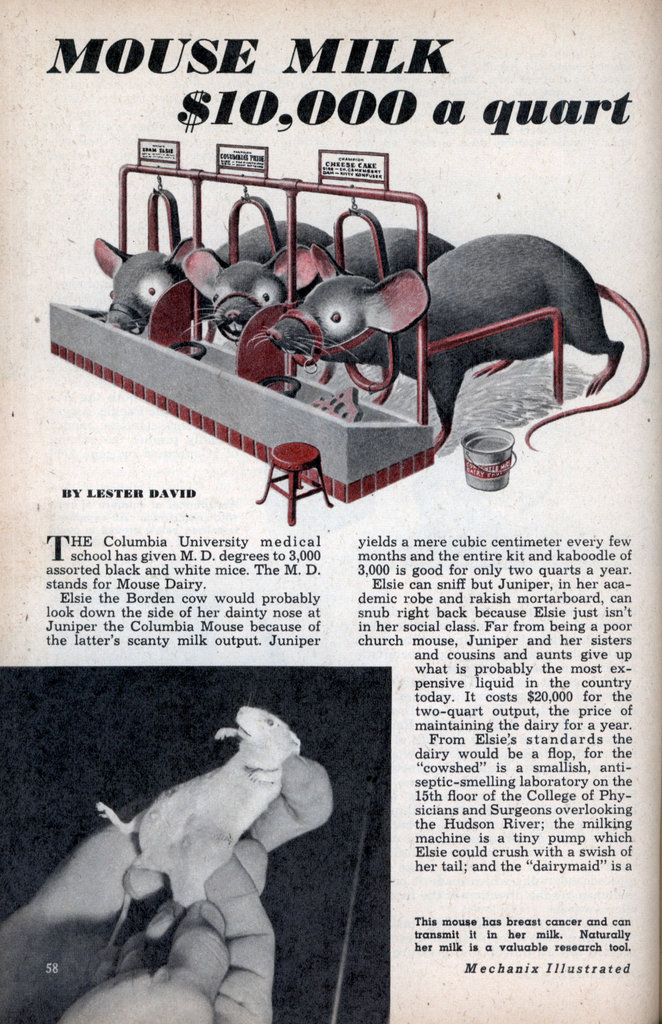 THE Columbia University medical school has given M. D. degrees to 3,000 assorted black and white mice. The M. D. stands for Mouse Dairy.

Elsie the Borden cow would probably look down the side of her dainty nose at Juniper the Columbia Mouse because of the latter’s scanty milk output. Juniper yields a mere cubic centimeter every few months and the entire kit and kaboodle of 3,000 is good for only two quarts a year. Elsie can sniff but Juniper, in her academic robe and rakish mortarboard, can snub right back because Elsie just isn’t in her social class. Far from being a poor church mouse, Juniper and her sisters and cousins and aunts give up what is probably the most expensive liquid in the country today. It costs $20,000 for the two-quart output, the price of maintaining the dairy for a year. From Elsie’s standards the dairy would be a flop, for the “cowshed” is a smallish, antiseptic-smelling laboratory on the 15th floor of the College of Physicians and Surgeons overlooking the Hudson River; the milking machine is a tiny pump which Elsie could crush with a swish of her tail; and the “dairymaid” is a bespectacled scientist in an acid-stained smock.

But Dr. Samuel Graff, boss of the dairy, knows better. He knows that Juniper and her herd are supplying scientists with a new tool With which to pry open the deadly secret of cancer.

Here’s why Juniper and her relatives are important: Dr. Graff and his colleagues at the medical college found that breast cancer in mice bears a close resemblance to the same type of malignancy in humans. It had been known for some years that in mice breast cancer can be induced by feeding or injecting the milk from those mice which develop the disease spontaneously. The collaborating specialists therefore concentrated their attention on the identification and isolation of the cancer-producing agent transmitted in the milk. After considerable research they succeeded in isolating the “thing” which they believe causes the cancer in mice. This supposed virus, when photographed and magnified 35,000 times, is shaped like a rubber ball.

Now here’s how the 3,000 mice in the lab fit into the picture: Of the total mouse population, 680 are white mice which almost always develop cancer of the breast. The others are black mice, which almost never get the disease. Dr. Graff and his associates milk the cancerous mice and feed the fluid to the non-cancerous black mice. Then, says Dr. Graff:

“In a year and a half, if the black mice develop cancer, we will have proved that the chemical we isolated is that which causes cancer of the breast in mice.”

The dairy’s milking machine is a breast pump using a tiny glass tube with a minute rubber attachment. A mercury regulator keeps the pressure even. It takes just about ten minutes to milk each mouse and each can be milked only once during pregnancy.

The mice are kept in scrupulously clean metal cages, one mouse to a cage, and the cages are stacked like book shelves in three rooms of the lab. White mice are kept in one room, black ones in another and a “control group” the ones to watch for development of cancer, in the third. The cages are eight inches long and six high and are lined with sterile wood shavings.

Living conditions are ideal for the dairy’s population. Everything possible is done to maintain the health of the mice because, says Dr. Graff: “Any disease would destroy our experiment. That’s why these mice live better than most people.”