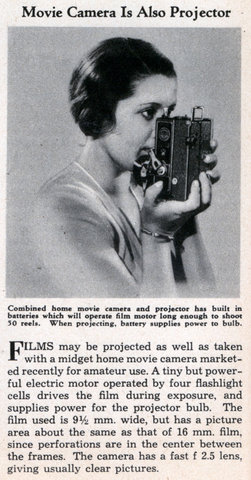 Movie Camera Is Also Projector
FILMS may be projected as well as taken with a midget home movie camera marketed recently for amateur use. A tiny but powerful electric motor operated by four flashlight cells drives the film during exposure, and supplies power for the projector bulb. The film used is 9-1/2 mm. wide, but has a picture area about the same as that of 16 mm. film, since perforations are in the center between the frames. The camera has a fast f 2.5 lens, giving usually clear pictures.