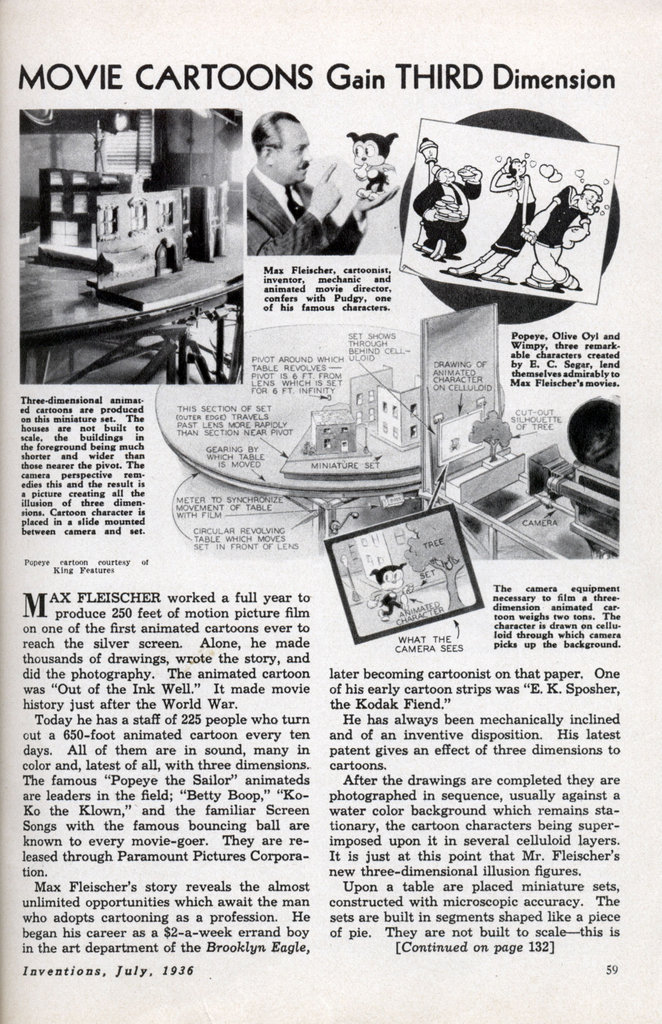 MAX FLEISCHER worked a full year to produce 250 feet of motion picture film on one of the first animated cartoons ever to reach the silver screen. Alone, he made thousands of drawings, wrote the story, and did the photography. The animated cartoon was “Out of the Ink Well.” It made movie history just after the World War.

Today he has a staff of 225 people who turn cut a 650-foot animated cartoon every ten days. All of them are in sound, many in color and, latest of all, with three dimensions. The famous “Popeye the Sailor” animateds are leaders in the field; “Betty Boop,” “Ko-Ko the Klown,” and the familiar Screen Songs with the famous bouncing ball are known to every movie-goer. They are released through Paramount Pictures Corporation.

Max Fleischer’s story reveals the almost unlimited opportunities which await the man who adopts cartooning as a profession. He began his career as a $2-a-week errand boy in the art department of the Brooklyn Eagle, later becoming cartoonist on that paper. One of his early cartoon strips was “E. K. Sposher, the Kodak Fiend.”

He has always been mechanically inclined and of an inventive disposition. His latest patent gives an effect of three dimensions to cartoons.

After the drawings are completed they are photographed in sequence, usually against a water color background which remains stationary, the cartoon characters being superimposed upon it in several celluloid layers. It is just at this point that Mr. Fleischer’s new three-dimensional illusion figures.

Upon a table are placed miniature sets, constructed with microscopic accuracy. The sets are built in segments shaped like a piece of pie. They are not built to scaleâ€”this is part of the secret of the process. Between the camera and the set is a frame on which the celluloids with their drawings are mounted. The camera photographs through the celluloid and includes the background, so that the characters seem to be walking on the set. Between the lens and the celluloid, cut-outs of trees or other objects can be mounted. Thus the completed film presents a single picture of objects actually photographed in three vertical planes.

This alone, however, is not enough to give the illusion. Ordinary camera lenses are set for infinity, which is an imaginary point as many miles distant as vision may reach. Mr. Fleischer’s cameras, however, have the lenses set for an infinity of six feet, which is the imaginary vanishing point of the set on the revolving tableâ€”the pivot around which the set moves.

When the table revolves, the portion of the set which is closest to the camera seem to be moving more rapidly than sections nearer the pivot. The human eye is accustomed to viewing things in its own manner, so when a film made by this process is projected, the spectator unconsciously reconciles the false vanishing point with his perspective.