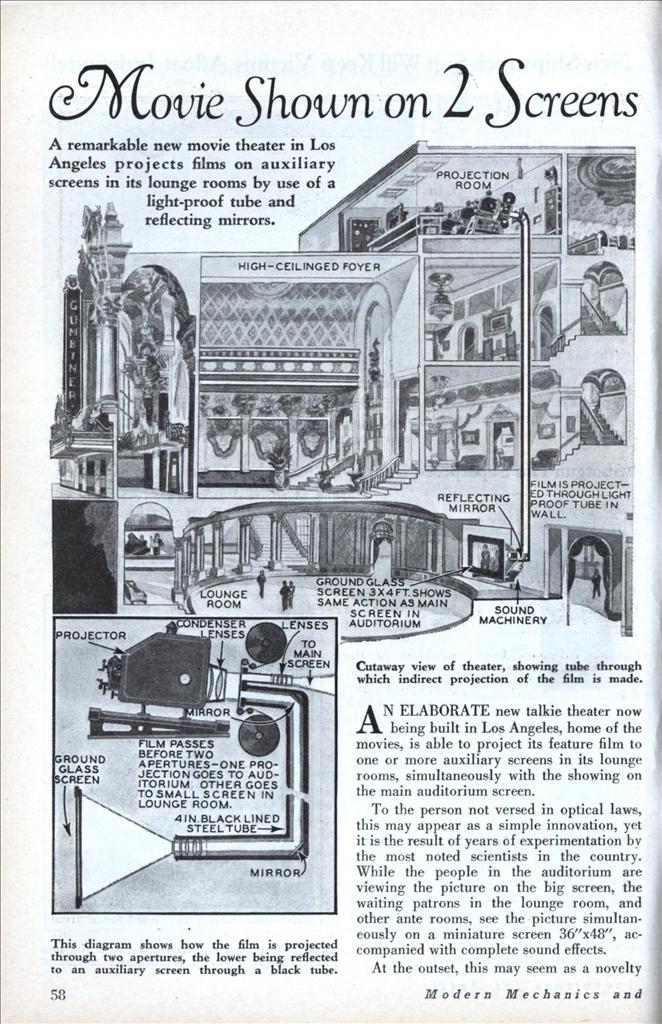 A remarkable new movie theater in Los Angeles projects films on auxiliary screens in its lounge rooms by use of a light-proof tube and reflecting mirrors.

AN ELABORATE new talkie theater now being built in Los Angeles, home of the movies, is able to project its feature film to one or more auxiliary screens in its lounge rooms, simultaneously with the showing on the main auditorium screen.

To the person not versed in optical laws, this may appear as a simple innovation, yet it is the result of years of experimentation by the most noted scientists in the country. While the people in the auditorium are viewing the picture on the big screen, the waiting patrons in the lounge room, and other ante rooms, see the picture simultaneously on a miniature screen 36″x48″, accompanied with complete sound effects.

At the outset, this may seem as a novelty only. But it has a distinct commercial value to continuous performance theaters. While a patron is waiting admission to the auditorium, he can see the picture in miniature. After gaining entry to the auditorium, he probably will leave when the picture reaches the point where he first viewed it in miniature. So the seats are vacated sooner, and the box office profits.

To go into the intricate optical laws which make possible the indirect projection, would be about as intelligible to the average reader as the Einstein theory or the fourth dimension. But the rudiments of the system can be gleaned from the photo-diagram.

It must be assumed that the average reader understands how a picture film passes through the projection machine. The “frames” —that is, each individual picture on the strip of film—are exposed momentarily before the aperture in the gate of the projection machine. A powerful light is focused upon the aperture, and projects the image on the film through a lens to the screen. Seemingly, pictures in motion result.

Now, if a second aperture is cut in the gate, two frames can be exposed simultaneously. A special condenser lens floods both apertures with light. The light beam from the second aperture, carrying the picture image, is conveyed through a black-lined tube fitted with special mirrors and lenses, to a remote point where it is projected on the back of a ground glass plate. The visible result is similar to looking into the finder of a camera.

An ultra-modern barber shop with complete valet service is provided for the men patrons, while the children are catered to with unique playrooms. The ceiling and walls of these rooms are an excellent imitation of the interior of the menagerie tent at a circus. Around the walls are miniature cages with miniature mounted animals— lions, tigers, elephants, giraffes—all exceptionally life-like in appearance.

The lounge room is especially commodious, and can accommodate 400 persons. Adjacent to this room is a cafe serving light lunches. Also an exhibition room where “objets d’art” are on display. At one end of the lounge room, built into the wall behind heavy plate glass, is a broadcasting room from which the theater programs can be “put on the air.” Patrons can see this in operation. There are no permanent fixtures attached to the floor of the lounge room, so all furniture can quickly be removed to convert the room into a ball-room.

Mechanical and electrical features of the theater are very novel. The theater is sectionally ventilated. Sensitive thermostats are placed at numerous points in the building. If a crowd collects at one point, the bodily heat will affect the thermostat, which, in turn, operates the ventilators, and provides cooler air to that section of the building.

The floor of the main auditorium of the theater not only slopes toward the stage, but is also concave—the side seats rise above the center seats. Every seat in the house provides an unobstructed view of the stage or the screen. Behind a ground glass panel in the front of every step in the aisles, is a green neon tube. These provide a grassy-green pathway along the aisles, which make the aisles clearly visible to the patrons, but diffuse no light upon the projection screen.