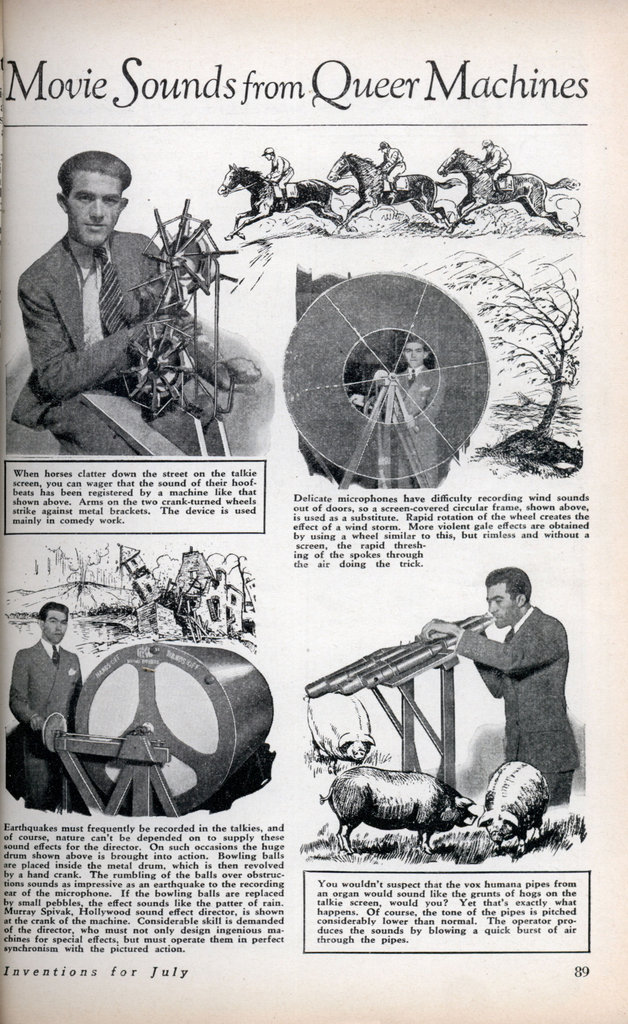 When horses clatter down the street on the talkie screen, you can wager that the sound of their hoof-beats has been registered by a machine like that shown above. Arms on the two crank-turned wheels strike against metal brackets. The device is used mainly in comedy work.

Earthquakes must frequently be recorded in the talkies, and of course, nature can’t be depended on to supply these sound effects for the director. On such occasions the huge drum shown above is brought into action. Bowling balls are placed inside the metal drum, which is then revolved by a hand crank. The rumbling of the balls over obstructions sounds as impressive as an earthquake to the recording ear of the microphone. If the bowling balls are replaced by small pebbles, the effect sounds like the patter of rain. Murray Spivak, Hollywood sound effect director, is shown at the crank of the machine. Considerable skill is demanded of the director, who must not only design ingenious machines for special effects, but must operate them in perfect synchronism with the pictured action.

Delicate microphones have difficulty recording wind sounds out of doors, so a screen-covered circular frame, shown above, is used as a substitute. Rapid rotation of the wheel creates the effect of a wind storm. More violent gale effects are obtained by using a wheel similar to this, but rimless and without a screen, the rapid threshing of the spokes through the air doing the trick.

You wouldn’t suspect that the vox humana pipes from an organ would sound like the grunts of hogs on the talkie screen, would you? Yet that’s exactly what happens. Of course, the tone of the pipes is pitched considerably lower than normal. The operator produces the sounds by blowing a quick burst of air through the pipes.