Details of the dioramas may be found here as well as a detailed biography. 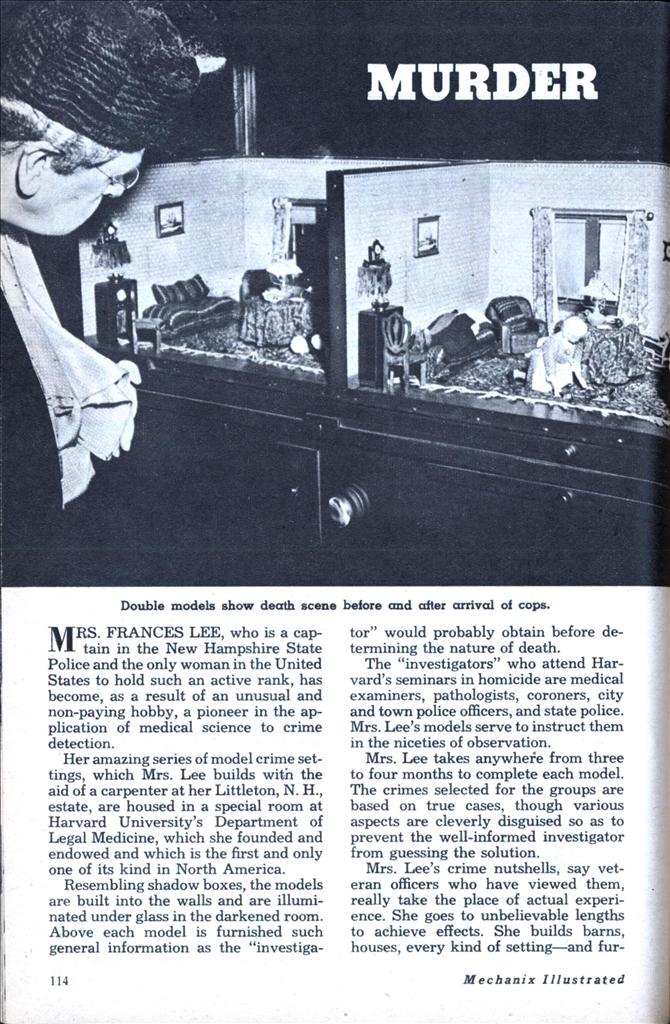 MURDER IS HER HOBBY

A gentle 77-year-old. dowager is New England’s top criminologist and the creator of Harvard’s famous “nutshell studies” of unexplained death.

MRS. FRANCES LEE, who is a captain in the New Hampshire State Police and the only woman in the United States to hold such an active rank, has become, as a result of an unusual and non-paying hobby, a pioneer in the application of medical science to crime detection.

Her amazing series of model crime settings, which Mrs. Lee builds with the aid of a carpenter at her Littleton, N. H., estate, are housed in a special room at Harvard University’s Department of Legal Medicine, which she founded and endowed and which is the first and only one of its kind in North America.

Resembling shadow boxes, the models are built into the walls and are illuminated under glass in the darkened room. Above each model is furnished such general information as the “investiga- tor” would probably obtain before determining the nature of death.

The “investigators” who attend Harvard’s seminars in homicide are medical examiners, pathologists, coroners, city and town police officers, and state police. Mrs. Lee’s models serve to instruct them in the niceties of observation.

Mrs. Lee takes anywhere from three to four months to complete each model. The crimes selected for the groups are based on true cases, though various aspects are cleverly disguised so as to prevent the well-informed investigator from guessing the solution.

Mrs. Lee’s crime nutshells, say veteran officers who have viewed them, really take the place of actual experience. She goes to unbelievable lengths to achieve effects. She builds barns, houses, every kind of setting—and fur- nishes them with lifelike, third-dimension realism. She uses special lights and special magnifying lenses on her glasses while working on the models, handling dental and watchmaker’s tools like an expert.

Mrs. Lee even has to scale down her needle and thread and the size of her stitches when fashioning sweaters, lace work on dresses, chair backs, doilies, bedding, or when knitting the stockings worn by the female figures in her models. The knitting needles she uses, each smaller than a common pin, are the tiny ones used by Belgian women in lacemaking.

Perhaps the most amazing thing about her models is that the doors actually open, bureau drawers open, window shades roll up, stove lids lift, books open and have printed pages, and costumes are complete even to underwear. In one of the miniature settings is a state trooper who is only five inches tall. The whistle hanging around his neck can be blown. The pencil in his hand is made from the point of a toothpick but, incredibly, it has lead in it.

A door, no larger than a postage stamp, shows a bullet hole in the screen. Like everything else in Mrs. Lee’s amazing models, the bullet hole is exactly in scale. On the floor in a model kitchen is a miniature red wooden mousetrap. It works.

Mrs. Lee wants no distracting “phony-ness” in her details.

“Nutshell studies,” explains Mrs. Lee, “are not presented as crimes to be solved. They are, rather, designed as exercises in observation and evaluating indirect evidence, especially that which may have medical importance. Through ignorance, in many cases, important evidence has been destroyed.”

To emphasize such ignorance in detection, one of Mrs. Lee’s models shows two rooms that are apparently identical. One of the rooms shows how it was 80 minutes after a police officer has entered it. The cop has committed more than 30 major errors, plus a score of minor ones.

Each nutshell crime model is also a distinctive period setting. There is a country living room of the present day with miniatures of the New York Times and the Littleton Courier on the floor by a vacant armchair pulled up before a fireplace. The mastheads of the newspapers are perfectly reproduced. A tiny ashtray on a table no larger in circumference than the eraser of a pencil is filled with diminutive cigarette butts.

One of her models depicts a barn hanging. The lumber used to build this barn came from a 200-year-old barn on her Littleton estate that had been blown down during a bad storm. She had her carpenter slice the wood paper-thin, take off the inside and the outside, throw away the middle and put them together again, sandwich fashion, to retain their authenticity.

The farm tools displayed in this model, no longer than a common pin, are perfectly fashioned. The saw is razor-sharp and will draw blood if handled improperly. The ox yoke in the barn is a soft, weathered blue that comes only with time and exposure to the elements. Carrying out her lifelike effects further in this particular model, Mrs. Lee covered the ceiling of the barn with actual cobwebs and dust and saw to it that the corpse hanging from the beam really turned.

The wallpaper in many of her models is perfectly reproduced and it often takes a whole roll to paper one of her miniature rooms. A divan has real springs and a mattress.

Mrs. Lee’s father was John Jacob Glessner, a vice-president and director of the International Harvester Company. This, and other affluent connections, should explain how Mrs. Lee can spend so much on her special hobby. Quite early in life she acquired a taste for things in miniature, began making models of such groups as the Chicago Symphony Orchestra and the famous Flonzaly quartet. Her interest in legal medicine and crime detection developed through her friendship with Dr. George Burgess Magrath, a Harvard classmate of her brother who came to be New England’s foremost medical examiner. Since approaching President Lowell of Harvard many years ago about starting the University’s department of legal medicine Mrs. Lee has given the department nearly half a million dollars besides uncountable time and devotion to her tiny tableaux of unexplained death that sharpen the observation power of serious students of crime. •