Apparently this story was so sensational that the editors had to abandon their headline capitalization style guide. “Screw it, this story is too big, I’m going all in. If I don’t, how will our readers know that it happened On The operating table?”

Surprisingly, operating room fires still happen quite often. The FDA has an initiative to help reduce the number of occurrences. 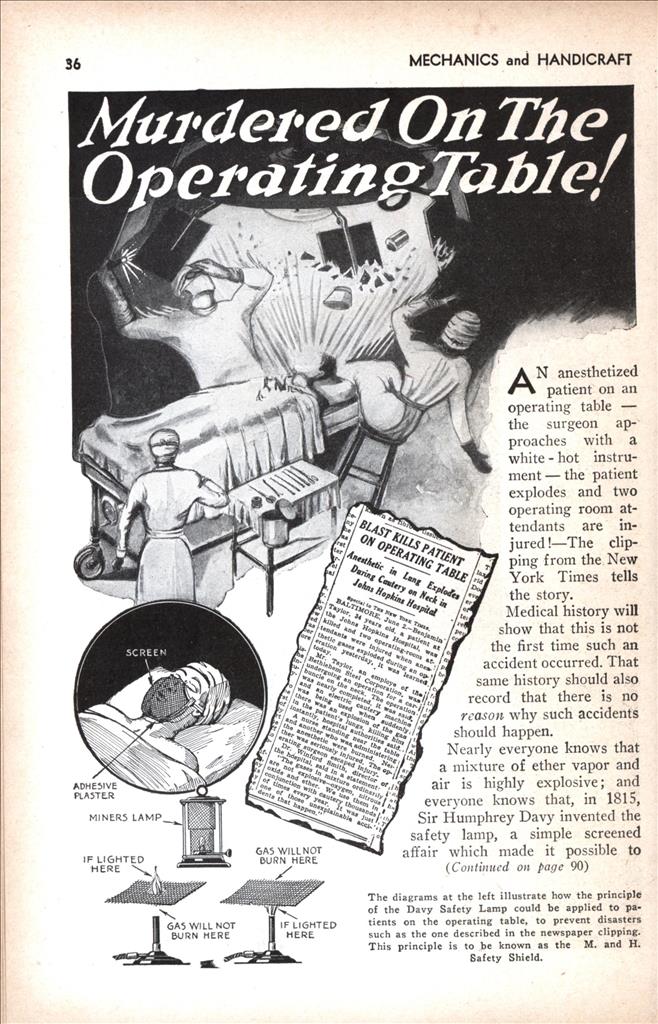 Murdered On The Operating Table!

AN anesthetized patient on an operating table — the surgeon approaches with a white – hot instrument—the patient explodes and two operating room attendants are injured!—The clipping from the New York Times tells the story.

Medical history will show that this is not the first time such an accident occurred. That same history should also record that there is no reason why such accidents should happen. Nearly everyone knows that a mixture of ether vapor and air is highly explosive; and everyone knows that, in 1815, Sir Humphrey Davy invented the safety lamp, a simple screened affair which made it possible to have a burning flame in an atmosphere of highly explosive gases.

The application of this same principle could —and should—be applied to every patient in an operating room. The only requisite is that a wire screen, which can be molded to fit the patient’s face, be strapped over the nose and mouth, with cloth pads beneath to prevent pressure against the skin and with adhesive tape sealing all entrances for gas, except those through the screen itself. Now, regardless of the inflammable nature of the gases in the patient’s lungs, the physician need not worry about the possibility of an accidental spark or flame igniting the gas and blowing his patient into the “Land of Kingdom Come.” Any form of ether or gas mask could then be applied over this safety protection with the same effectiveness as it is being used today.

In view of the fact that medical apparatus assumes the name of its originator, we christen this the Mechanics and Handicraft Safety Shield. We would appreciate reports from any hospitals introducing this new application of an age-old principle.