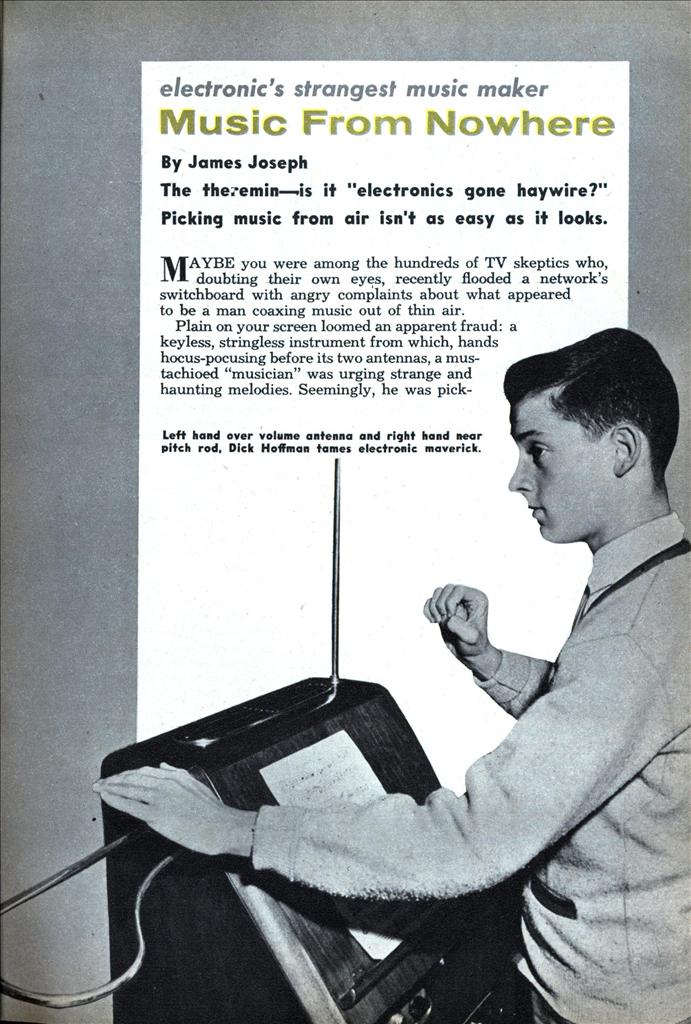 The theremin—is it “electronics gone haywire?’1 Picking music from air isn’t as easy as it looks.

MAYBE you were among the hundreds of TV skeptics who, doubting their own eyes, recently flooded a network’s switchboard with angry complaints about what appeared to be a man coaxing music out of thin air.

Plain on your screen loomed an apparent fraud: a keyless, stringless instrument from which, hands hocus-pocusing before its two antennas, a mustachioed “musician” was urging strange and haunting melodies. Seemingly, he was pick- ing notes—and whole sonatas—from nowhere.

No hoax was either the musician, Dr. Sam Hoffman, nor his eerie-voiced music maker—a theremin.

The theremin (pronounced “thur’-a-min”) is one of the world’s strangest electronic instruments. And Dr. Hoffman, a mild-mannered Beverly Hills, Calif., foot doctor, is not only its musical master, but undoubtedly the world’s foremost theremin virtuoso.

Together they’ve teamed to goose-pimple the soundtracks of more than thirty movies, including “Spellbound” and “Lost Weekend,” both Oscar winners. Hypnotizing nothing more than a couple of chrome-plated antennas, Dr. Hoffman has put the theremin’s electronic voice between the covers of half a dozen record albums—one aptly titled, “Music Out of the Moon.” Recently, after years behind the cameras, he stepped before them to prove to skeptical viewers that the theremin is fact, not fantasy.

Strange as is its music, stranger yet is the theremin itself. Some have called it “a radio gone haywire.” Others contend that it is really not a musical instrument at all, simply an oscillatory circuit bib-and-tuckered in a mahogany console.

Though hailed as “the newest of instruments,” it was concocted 35 years ago by Russian-born electronic engineer Leo Theremin. Manufacturing rights were sold to RCA.

Just as paradoxical is the fact that while a beginner in electronics can easily build a theremin (so simple and low cost is its circuitry), few have ever learned to tame its electronic temperament. Perhaps not a hundred people have succeeded in turning the theremin’s squeals into anything approaching music.

Shrugs one electronic engineer: “Queer duck, the theremin. Most guys who build one can’t play it. And most who can play it don’t know beans about electronics … or, in fact, how the darn thing works.”

“It works, but don’t ask me how,” concedes the theremin’s master, Dr. Hoffman.

Not even its inventor, Leo Theremin, ever learned to make his brainchild behave. Neither have some of the ablest of musicians—which explains why RCA put together only a few hundred of the instruments (back in 1929-30), and never produced another.

The scores of theremins lying forgotten in attics are currently worth their weight in gold—anywhere from $500 to $1000.

“Why they should be worth anything at all,” said one engineer, “beats me. A half dozen tubes and as many coils and you can build your own theremin for maybe $50.

(NOTE: Electronics Illustrated will feature complete plans for a theremin in an early issue. Cost: Under $20! Watch for it.) A theremin involves nothing more complex than three radio-frequency oscillators. Two of them beat at an audible frequency. Add hand capacity—as does Dr. Hoffman with his right hand as he gestures before the vertical pitch antenna—and you lower or raise the frequency of one of the RF oscillators, thus the pitch of the beat frequency, which is amplified.

Amplification, or volume, is controlled by a third oscillator. Like the others, its frequency is changed by hand capacity. The player’s left hand wavers above the looped, horizontal volume antenna. The volume oscillator’s rectified output biases an output amplifier tube.

Actually, many oscillating circuits have been devised which give similar musical, or dissident, results. Essential to them all, however, are oscillating circuits controlled by hand capacity. The closer a musician’s right hand to the pitch antenna, the higher the pitch. Some theremins range through four full octaves and can strike notes above a soprano’s high-C.

The farther the left hand from the volume antenna, the louder the theremin’s eerie output.

Most theremins, for example, lapse silent unless a hand interrupts their electrostatic fields. Reason: the two pitch oscillators, one set at fixed frequency, the other motivated by hand capacity, are adjusted to produce a zero beat (no audible sound) unless disturbed. Also assuring “silence” is the fact that, undisturbed, the volume control oscillator biases the “gain control” tube to cut-off.

A musician can limit the theremin’s tonal range simply by turning a knob on the console panel. This in turn sets the fixed pitch oscillator for the lowest note the performer wishes to play.

“In effect,” explains Dr. Hoffman, “turning that knob either spaces the notes farther apart or brings them closer together.”

When, for example, the theremin is set for its full four octave range, the movement of the musician’s right hand toward the pitch antenna “finds” a new note every re of an inch in the electrostatic field. With its tonal output limited, say to two octaves, the theremin’s notes are spaced about 1/8 inch apart.

In the process of “picking” notes from a theremin’s field, the musician’s hands must constantly vibrate to extract from raw notes a subtle vibrato quality which produces what some call “music bewitched.” In its higher registers, the theremin speaks as shrilly as a violin. In its lowest it cries like a cello.

You’d think that your entire hand would cause musical havoc with a new note every 1/16 of an inch. It doesn’t. “Capacity” exists only between the antenna and the tip of your fingers. If, however, you make the musically fatal mistake of contacting the antenna—either the volume antenna with your left hand or the pitch control with your right—silence reigns. Why? Electronically speaking, you’ve grounded the oscillators.

“Critical though hand capacity is,” concedes Dr. Hoffman, “there’s nothing critical in the antennas themselves.” Antennas, about 24 inches in length, are sized for the stature and convenience of the musician. Nor is it significant that one is vertical, the other horizontal and looped. Their structure merely adds dramatic effect. Set at right angles to one another, the chance of conflict between their electrostatic fields is reduced.

Aside from the oscillatory circuits, of course, theremins also must have a power supply, power amplifiers and a loudspeaker. Most theremin speakers are usually 12-inch jobs. Hi-fi, of course, wasn’t in the commercial lexicon when RCA built what few theremins it did back in 1929.

“Hi-fidelity speakers might improve tonal quality,” concedes Dr. Hoffman, “though I’m no authority on such things. My own instrument’s 12-inch speaker chills movie and TV audiences without a boost from higher fidelity. And as a musician, I’m satisfied with its quality.”

So, apparently, are Hollywood moguls who have hired Dr. Hoffman to harry the soundtracks of their greatest spine-tinglers with the invisible “keyboard” of electronics’ strangest music maker.