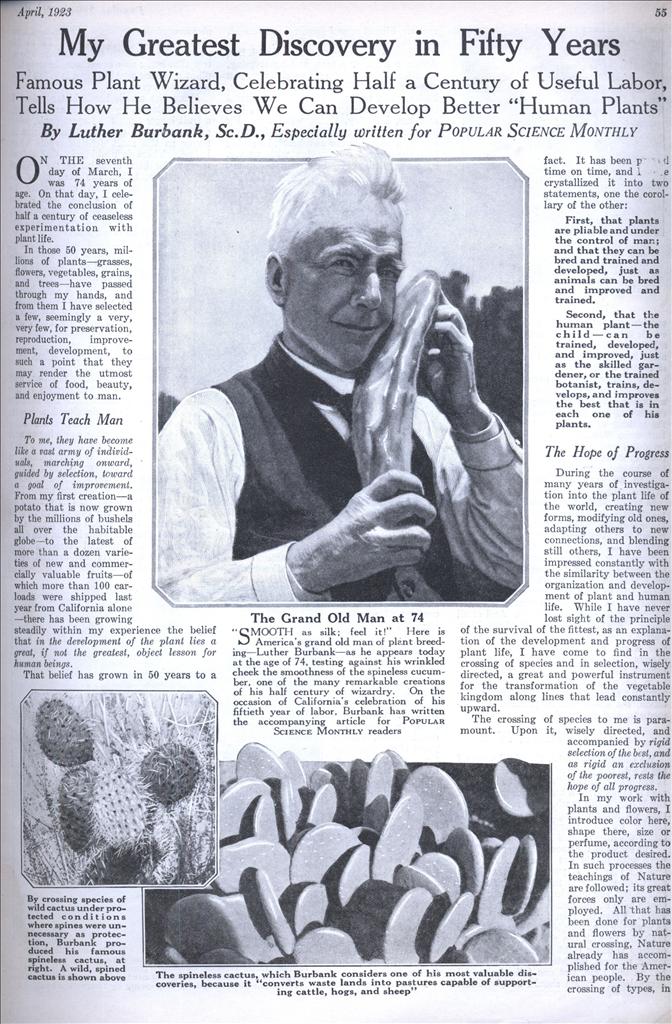 Plants Teach Man To me, they have become like a vast army of individuals, marching onward, guided by selection, toward a goal of improvement. From my first creationâ€”a potato that is now grown by the millions of bushels all over the habitable globeâ€”to the latest of more than a dozen varieties of new and commercially valuable fruitsâ€”of which more than 100 carloads were shipped last year from California alone â€”there has been growing steadily within my experience the belief that in the development of the plant lies a great, if not the greatest, object lesson for human beings.

That belief has grown in 50 years to a fact. It has been proved time on time, and I’ve crystallized it into two statements, one the corollary of the other: First, that plants are pliable and under the control of man; and that they can be bred and trained and developed, just as animals can be bred and improved and trained.

Second, that the human plant â€” the child â€” can be trained, developed, and improved, just as the skilled gardener, or the trained botanist, trains, develops, and improves the best that is in each one of his plants.

The Hope of Progress During the course of many years of investigation into the plant life of the world, creating new forms, modifying old ones, adapting others to new connections, and blending still others, I have been impressed constantly with the similarity between the organization and development of plant and human life. While I have never lost sight of the principle of the survival of the fittest, as an explanation of the development and progress of plant life, I have come to rind in the crossing of species and in selection, wisely directed, a great and powerful instrument for the transformation of the vegetable kingdom along lines that lead constantly upward.

The crossing of species to me is paramount. Upon it, wisely directed, and accompanied by rigid selection of the best, and as rigid an exclusion of the poorest, rests the hope of all progress.

In my work with plants and flowers, I introduce color here, shape there, size or perfume, according to the product desired. In such processes the teachings of Nature are followed; its great forces only are employed. All “that has been done for plants and flowers by natural crossing, Nature already has accomplished for the American people. By the crossing of types, in one instance, strength has been secured; in another, intellectuality; in still another, moral force. Nature alone has done this. But the work of man’s head and hands has not yet been summoned to prescribe for the development of a race. So far, a preconceived and mapped – out crossing of bloods finds no place in the making of peoples and nations. But, when Nature has already done its duty, and the crossing leaves a product that in the rough displays the best human attributes, all that is left to be done falls to selective environment.

In my life work, when two different plants have been crossed, that is only the beginning. It is only one step, however important; the great work lies beyondâ€” in the care, the nurture, the influence of surroundings, selection, the separation of the best from the poorest; all of which are embraced in the words I have applied â€”selective environment.

Just as all plant life is sensitive to environment, so is all animal life. And of all living things the child is the most sensitive. Surroundings act upon the child as the outside world acts upon the plate in the camera. A child is the most susceptible thing in the world to influence, and, if that force be applied rightly and constantly when the child is in its most receptive condition, the effect will be pronounced, immediate, and permanent.

The secret of the successful results of my work with plants has been partly in my love for plants. If you are cultivating a plant, developing it into something finer and nobler, you must love it, not hate it; be gentle with it, not abusive; be firm, never harsh. I give the plants upon which I am at work the best possible environment. So it should be with the child, if you wish to develop it along right ways. Let it have music, pictures, laughter, and a good time; not an idle time, but one full of cheerful occupations. Plants should be given sun and air, blue sky, and proper nourishment. Give them to your boys and girls.

Choose what improvement you wish in a flower, a fruit, or a tree, and by crossing, selection, cultivation, and persistence, you can fix this desirable trait irrevocably. Pick out any trait you want in your normal child, be it honesty, fairness, purity, lovableness, industry, thrift, what not. By surrounding this child with sunshine from the sky and from your own heart, by giving him the closest communion with nature, by feeding him well balanced, nutritious food, by giving all that is implied in “healthful environment influences,” you can thus cultivate in the child all of these traits, and fix them for all his life.

These are the most important discoveries, certainly the most valuable, that I have made in my half century of selecting, training, developing, and improving the members of the vegetable kingdom. In that time, I have passed through a million interesting experiences, not the least of which has been to watch the development, through years of experimentation, of productive, useful plants from forms that before had been comparatively worthless. I have looked down upon a miniature forest of 240,000 plum seedlings, of as many distinct varieties, from which I was to make a selection, right here in my own grounds, of ONE TREE, which, in turn, was to produce a plum that ripened rapidly, packed well, shipped well, and sold well in the market.

I have had the pleasure of developing a chestnutâ€”a tree that normally requires from 15 to 20 years to come into full bearingâ€”into a tree that bears nuts at six months from the planting of the seed nut, and is in full bearing at two years.

From the small, hard, bitter quince I have developed, by selection and crossing, a fruit larger than the largest apple, juicy and sweet when eaten raw, and as fine in flavor as the most delicious apple when baked. There is nothing in that quince except the best qualities of the original quince, but it has been given encouragement and opportunity to develop to its utmost, and it has responded, just as any other plant, animal, or child will respond and develop if so cared for.

I have taken the slow growing, small, hard-shelled wild black walnut and, by crossing it with the soft-wooded, soft-shelled, edible walnut, produced a tree with a finer, harder wood than the black walnut, yet which grows many times as rapidly as the latter and produces better and more nuts.

Prune Trees from Almonds From the crossing, selection, and development of young trees of the common prune within the past 40 years, I have developed a larger, sweeter, earlier fruit, which dries better, ships better, keeps better, and sells better. I recall one time, back in 1881, when Warren Dutton, a friend of mine, came to me in March for 20,000 prune trees, to be ready for setting out that same year. This meant the planting, and growing to a height of from two to five feet, of 20,000 prune trees within nine months. I took the contract, and this is what was done: Twenty-five thousand almonds were spread over a bed of well-drained creek sand, and covered with a thickness of burlap, over which was laid an inch of sand, kept moist. The almond seeds had the proper environment and the best of care. In two weeks they were sprouting. One by one, as they sprouted, they were set out in rows, four inches apart.

In June, when they were a foot or more highâ€”still being almonds, mind you, while I wanted prunesâ€”I obtained from a neighboring prune orchard, 25,000 prune buds, employed a budding crew of 16 men, and inserted the prune buds in the almond seedlings. Prune shoots appeared from the buds, the tops of the almond trees were cut away, and I had, not quite 20,000, but about 19,800 young prune trees, ready for delivery, and ready on time. They made an orchard of more than 200 acres, and, though that bit of work was done nearly 42 years ago, all of them are still growing and bearing abundantly.

Man Can “Go Nature One Better”

It is all so simple; life in every form is so clear; it is all a process of evolution. And man, by perseverance, patience, watchfulness, study, care and love, may aid im- measurably in the processes of that evolution. He may accomplish in 10 years what Nature takes 10 centuries to do.

For more than half a century I have had one definite objectâ€”the improvement of the vegetable kingdom for the benefit of man. Deciding first, exactly what I wish to create, I begin by selecting the strongest, best developed plants of that variety available. They come to seed, the best seed from them is planted again, and again developed for further selection and planting; cross fertilization by pollen is carried on, and so the work continues until the ultimate product of that particular parent stock is reached. There is nothing supernatural, nothing mysterious about it. It is a work into which I gladly, joyously put my heart and mind and hands.

Just now, I am trying to produce better grains, nuts, fruits, and vegetables, as well as larger, more beautiful, and more fragrant flowers, striving not only for new forms, colors, and sizes, but for those products of the vegetable kingdom that will provide more food and less waste.

On my experimental farms, more than 2500 experiments are being conducted. I shall have ready, this spring, a variety of new grains, seed-bearing grasses, suitable for both forage plants and for grain crops, and others for cereals; new walnuts, huge, rapid-growing hardwood trees, which will produce more valuable lumber in 10 years than the now well-known varieties will in 50 or 100 years; a drought-resisting lippia for lawns in dry regions; a new asparagus, which is to the ordinary variety as the Burbank potato was to its predecessors; an artichoke, the blossom of which is four feet or more in circumference; and a number of new climbing vines and flowers.

Burbank Promises Future Marvels Among the new blossom-bearing plants I shall offer soon, are immense larkspurs, both annual and perennial; new zinnias, larger and brighter than any before known; new petunias and a verbena with much larger flowers and a pleasing odor. There are to follow, within a year or so, still more interesting and valuable productions from the work of selection, development and improvement that I have been doing in the plant world for the last half century.