Mechanix Illustrated
Issue: May, 1950
Posted in: General
Tags: agriculture, business opportunity, food, food processing
No Comments on My Profits Are Mushrooming (May, 1950) 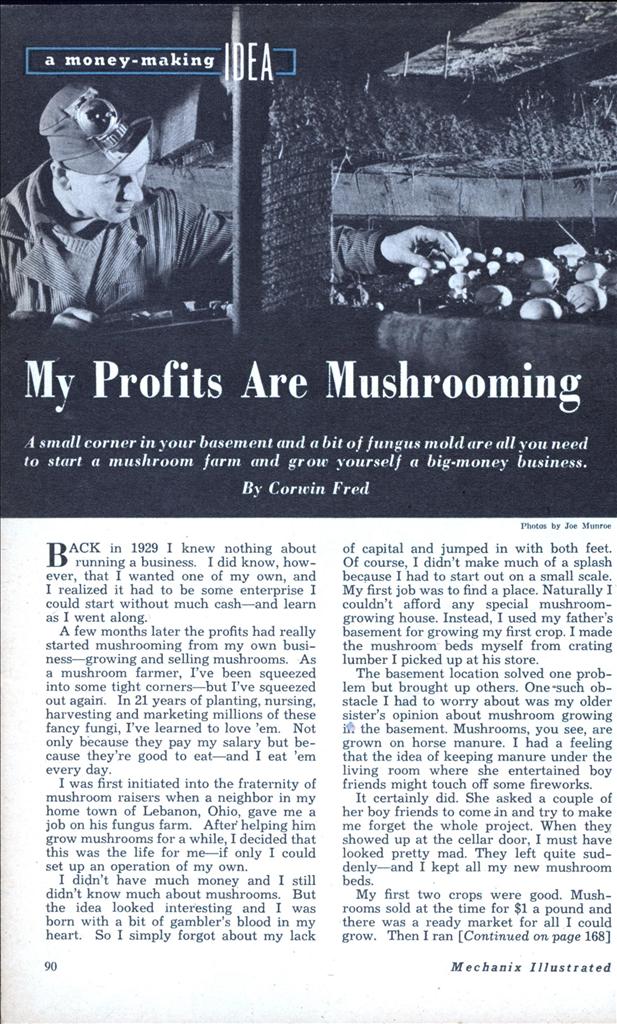 My Profits Are Mushrooming

A small corner in your basement and a bit of fungus mold are all you need to start a mushroom farm and grow yourself a big-money business.

BACK in 1929 I knew nothing about running a business. I did know, however, that I wanted one of my own, and I realized it had to be some enterprise I could start without much cash—and learn as I went along.

A few months later the profits had really started mushrooming from my own business—growing and selling mushrooms. As a mushroom farmer, I’ve been squeezed into some tight corners—but I’ve squeezed out again. In 21 years of planting, nursing, harvesting and marketing millions of these fancy fungi, I’ve learned to love ’em. Not only because they pay my salary but because they’re good to eat—and I eat ’em every day.

I was first initiated into the fraternity of mushroom raisers when a neighbor in my home town of Lebanon, Ohio, gave me a job on his fungus farm. After helping him grow mushrooms for a while, I decided that this was the life for me—if only I could set up an operation of my own.

I didn’t have much money and I still didn’t know much about mushrooms. But the idea looked interesting and I was born with a bit of gambler’s blood in my heart. So I simply forgot about my lack of capital and jumped in with both feet. Of course, I didn’t make much of a splash because I had to start out on a small scale. My first job was to find a place. Naturally I couldn’t afford any special mushroom-growing house. Instead, I used my father’s basement for growing my first crop. I made the mushroom beds myself from crating lumber I picked up at his store.

The basement location solved one problem but brought up others. One-such obstacle I had to worry about was my older sister’s opinion about mushroom growing in the basement. Mushrooms, you see, are grown on horse manure. I had a feeling that the idea of keeping manure under the living room where she entertained boy friends might touch off some fireworks.

It certainly did. She asked a couple of her boy friends to come in and try to make me forget the whole project. When they showed up at the cellar door, I must have looked pretty mad. They left quite suddenly—and I kept all my new mushroom beds.

My first two crops were good. Mushrooms sold at the time for $1 a pound and there was a ready market for all I could grow. Then I ran into road blocks on the highway to success. Disease and insects started doing better than the mushrooms in the basement beds. With my crops failing I had to borrow money to keep going.

It takes time to learn all the mysteries of the mushroom. I was in the business for about three years before I made a really good go of it. During that time I rented one basement after another to grow my profitable delicacy. I even raised mushrooms in the basement of the busy five-and-ten on Lebanon’s main street.

My first real success was in an old stone building that used to be a brewery before Prohibition. The building combined many of the features that a good mushroom house should have. It was dark and cool enough to keep the temperature down near 58 to 60 degrees Fahrenheit which growing mushrooms require.

A year later I expanded into a large building on the site of my present plant. Everything was going smoothly until a local fire-maniac sneaked into the building one night and set it ablaze just to see the flames against the night sky. I rebuilt the house and later had additional buildings designed especially for mushroom production.

Today I have one of the biggest farms of its kind in the country. Ninety people help me raise and harvest a ton and a half of mushrooms daily from some six acres of darkened gardens in five special three-story buildings and a cluster of long one-floor houses. Each building has a watering and ventilating system to assure ideal conditions of moisture and coolness for maximum mushrooming. Endless belts carry the horse manure into, and out of, the buildings.

One of the most critical things I had to learn about growing mushrooms was just how to process that manure. After stacking it in piles and soaking it with water, it should be allowed to heat up in decomposition for about three weeks.

A couple of simple tests will tell you whether it’s ready to move into the growing houses. First, twist a bit of it in your hands. If the time is right, the fertilizer should shear apart easily. Fortunately, when it rots for a few weeks, the manure loses much of its odor. You can even keep it in the basement under the kitchen without causing any bloody Donnybrooks in your family.

When it has fully ripened, spread it six inches deep in the wooden culture beds. After it has gone through another heat, plant the mushrooms.

The mushroom is a delicate growth. Though it is one of nature’s simplest plants and, unlike green ones, needs no sunlight, it is also one of the most exacting. It reproduces from spores —single cells too small for the naked eye to see. Each full-grown specimen gives off millions of these tiny spores. To get these ready for planting, put spores from ripe mushrooms in glass jars with sterile rye or pieces of tobacco stem. They will keep growing on the rye or tobacco until the jar fills with mold. This is called spawn. You can buy it from the Mushroom Supply Co. at Toughkenamon or from J. B. Swayne at Kennett Square—both in Pennsylvania. It sells for about 50 cents a bottle, which is enough spawn to plant about 80 square feet of bed space.

After planting, the spawn continues to grow until a white mold-like culture called mycelium is formed. A layer of sifted soil is then spread on the beds. In three weeks the tiny mushrooms begin to “pin up”—or sprout—on these beds.

Once you start picking, you have to pick every day. A mushroom left a day too long is wasted. From the beds, the harvested mushrooms are routed through the packing room where girls pack them into half-pound cartons. These go to grocery stores within an 800-mile radius.

My first cellar crop produced a pound and a half to the square foot, which is good production. I raised them in trays so that I could carry them around and stack them on top of each other.

The present wholesale price of mushrooms ranges around 25 cents a half pound. Figuring a pound and a half grown on every square foot of bed space, the income per square foot would be about 75 cents. The beginner could have 180 square feet of growing space with six beds three feet wide by ten feet long. If his production is good he can make about $135 per crop. It’s better to start small, and then expand as you gain experience.

Mushrooms make an excellent hobby. The gardener who grows them need not forget his green thumb during the winter. He can keep in practice and at the same time produce mushrooms for the family and the local grocery. Then he can keep expanding till his profits have mushroomed him into a full-time career as a fungi farmer.

It’s a good life, this mushroom farming. If I had to do it over again, I’d still raise ’em. At least this way I can always have my own mushroom sauce whenever I want it—and usually afford the price of the big, juicy sirloin to go along with that delicious sauce, too.