Millikan is most famous for being the first person to determine the charge of a single electron. Apparently his work on cosmic rays was less important or correct. He believed that cosmic rays were high energy photons as opposed to charged particles. He was wrong. This quote from his Wikipedia entry caught my eye though:

Millikan thought the cosmic ray photons were the “birth cries” of new atoms continually being created by God to counteract entropy and prevent the heat death of the universe. 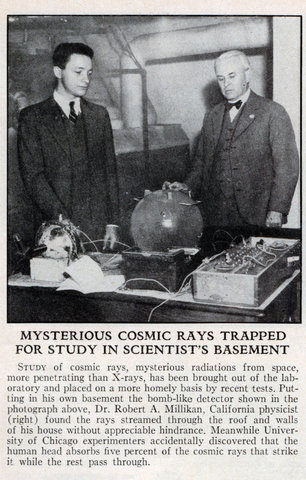 MYSTERIOUS COSMIC RAYS TRAPPED FOR STUDY IN SCIENTISTS BASEMENT
Study of cosmic rays, mysterious radiations from space, more penetrating than X-rays, has been brought out of the laboratory and placed on a more homely basis by recent tests. Putting in his own basement the bomb-like detector shown in the photograph above, Dr. Robert A. Millikan, California physicist (right) found the rays streamed through the roof and walls of his house without appreciable hindrance. Meanwhile University of Chicago experimenters accidentally discovered that the human head absorbs five percent of the cosmic rays that strike it while the rest pass through.