Apparently not included are the instructions for building a demonic looking ventriloquist’s dummy. 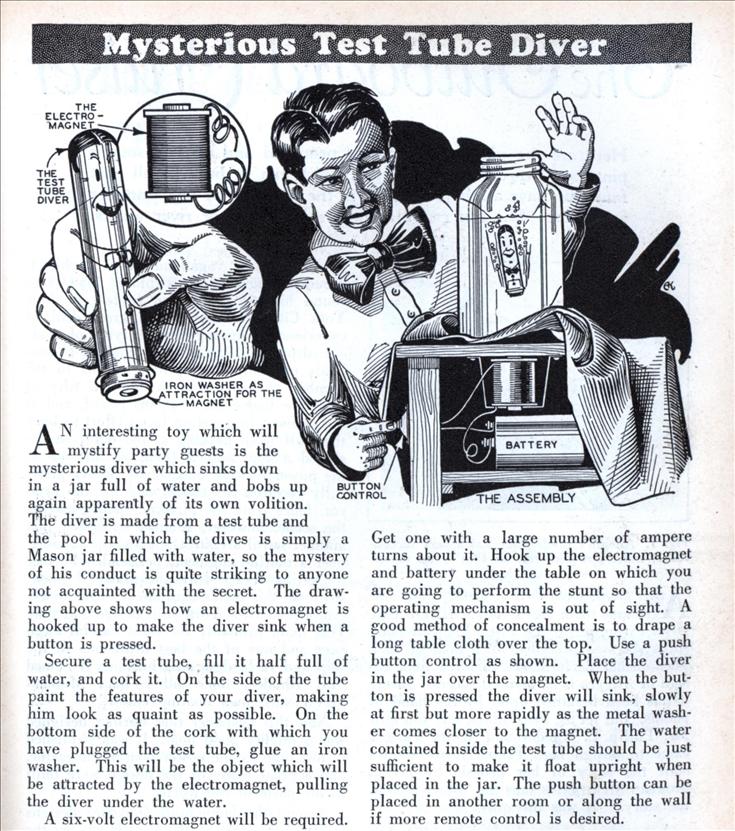 Mysterious Test Tube Diver
AN interesting toy which will mystify party guests is the mysterious diver which sinks down in a jar full of water and bobs up again apparently of its own volition. The diver is made from a test tube and the pool in which he dives is simply a Mason jar filled with water, so the mystery of his conduct is quite striking to anyone not acquainted with the secret. The drawing above shows how an electromagnet is hooked up to make the diver sink when a button is pressed.

Secure a test tube, fill it half full of water, and cork it. On the side of the tube paint the features of your diver, making him look as quaint as possible. On the bottom side of the cork with which you have plugged the test tube, glue an iron washer. This will be the object which will be attracted by the electromagnet, pulling the diver under the water.

A six-volt electromagnet will be required.
Get one with a large number of ampere turns about it. Hook up the electromagnet and battery under the table on which you are going to perform the stunt so that the operating mechanism is out of sight. A good method of concealment is to drape a long table cloth over the top. Use a push button control as shown. Place the diver in the jar over the magnet. When the button is pressed the diver will sink, slowly at first but more rapidly as the metal washer comes closer to the magnet. The water contained inside the test tube should be just sufficient to make it float upright when placed in the jar. The push button can be placed in another room or along the wall if more remote control is desired.