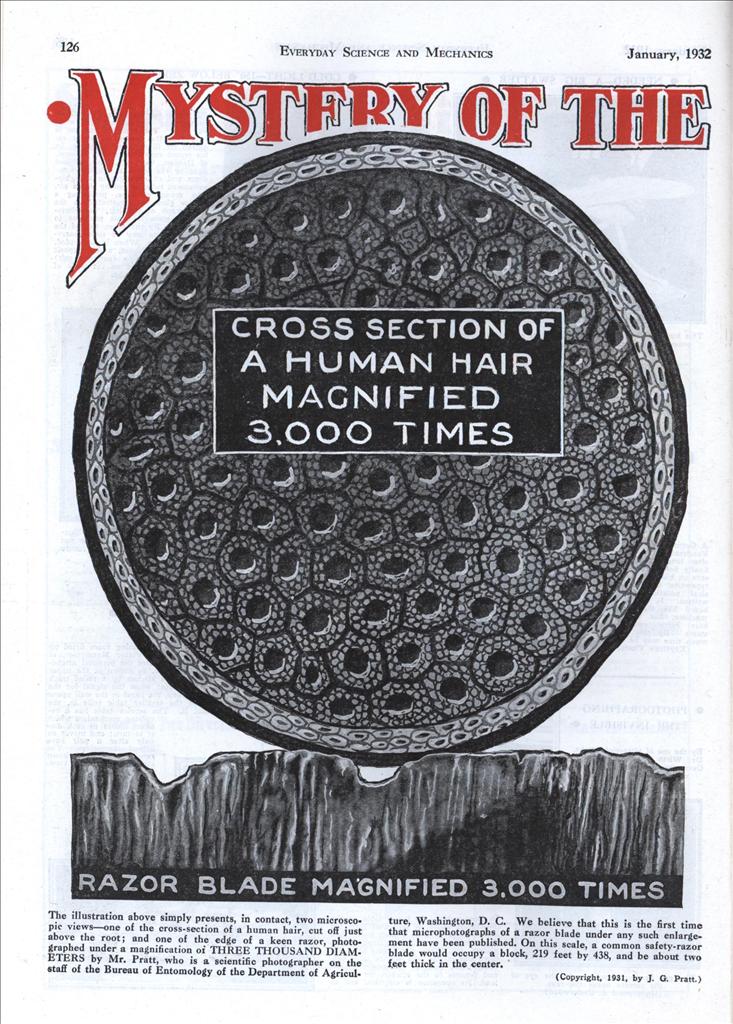 Mystery of the Razor Blade

There has been so much misunderstanding of razor blades in the past that every user of those universal utilities will welcome this highly interesting and authoritative article.

ALTHOUGH a large amount of research lias been conducted in connection with razor blades, the magnification has generally been carried little beyond three or four hundred diameters— insufficient to show the actual cutting edge and the effect of stropping.

On this account, the numerous myths and illusions which have found their way into the lore of razors have been handed down unchallenged since man began to shave.

The most common of these is that the razor’s edge is “sawtooth”; that these “teeth” are bent over in shaving and that stropping brings them back into proper alignment. The blade does look that way in sunlight, even to the naked eye; and the micrograph reproduced in Fig. 1, even at 200 diameters, seems to carry out this idea. Even eminent authorities show micrographs taken at two or three hundred diameters, similar to that seen in Fig. 2, in proof of the sawtooth theory. What appears sawtooth, however, is not the actual cutting edge, but the coarse grinding, probably 1/500-inch below the cutting edge, as shown in Fig. 3. I can easily condone this mistake because, when (after weeks of study) I managed to secure Micrograph No. 2, I remember throwing my hat in the air in the belief that my goal had finally been reached.

At 1,000 diameters the edge (see Fig. 4) straightens out into an unbroken line; at two thousand, and beyond, it shows the “grain” and a wavy or scalloped edge, according to the structure of the steel and the processes used at the factory (Fig. 5).

With the entire lack of scientific knowledge on the subject, it is remarkable that stropping devices have been improved to their present state of efficiency; for manufacturers could rely only upon shaving tests, and there are probably few things in life as variable as men’s whiskers.

People often ask me which I judge, from my extensive research, to be the sharpest blade on the market. Sharp- ness in a razor blade is merely a relative quality; because what best suits one beard might be very inferior when used on another.

If you can imagine a razor blade nearly two blocks long, with a continuous series of little mounds and jagged depressions hardly larger than the teeth of a bucksaw, you might visualize to some extent the magnitude of the task involved; especially since this vast edge can only be ‘Tacked” across the field of the camera a little at a time.

My investigation proved that stropping does not fill in the nicks; — it merely straightens up the edge where it is turned over, and pushes back into a plane the steel fibers which are bulged out of place. It is these which pull the whisker and make for uncomfortable shaving; the nicks seen at high magnification having little to do with the efficiency of the blade.

This fact is well illustrated in the large illustration on the first page of this article, showing that a comparatively large nick comprises hut a small portion of the cutting edge which attacks a single hair; the hair at this magnification, it will be seen, appearing about seven inches in diameter.

Another interesting fact rought to light is that the old-fashioned razor strop is just as efficient as the best of the machine stroppers. It has often been wondered why the real heavy blades, with proper stropping, give probably ten times as many comfortable shaves as the thin blades. The thin blade has a tendency to break down, practically all along the edge (Figs. 6, 7, 8) and its rejuvenation from stropping is more or less limited. With the heavy blades, although a nick appears here and there, the edge as a whole is practically untouched except for a certain amount of bending; and this is at once corrected by stropping, to almost the efficiency of a new blade. And even the nick, seen in Fig. 10, by compression of the bulged fibers, is reduced to one-third its original size.

In conclusion, I might say that the man who does his own shaving might well profit from the experiments conducted in connection with the care of razor blades. New blades are covered with a waxy substance which will preserve them in their original packages almost indefinitely. A blade used once, however, and subjected to the usual bathroom moisture, will deteriorate more rapidly from corrosion than from subsequent shaving, after shaving, therefore, wipe the blade dry and then cover it with vaseline ; and it will give you more and better shaves than has heretofore been its wont.