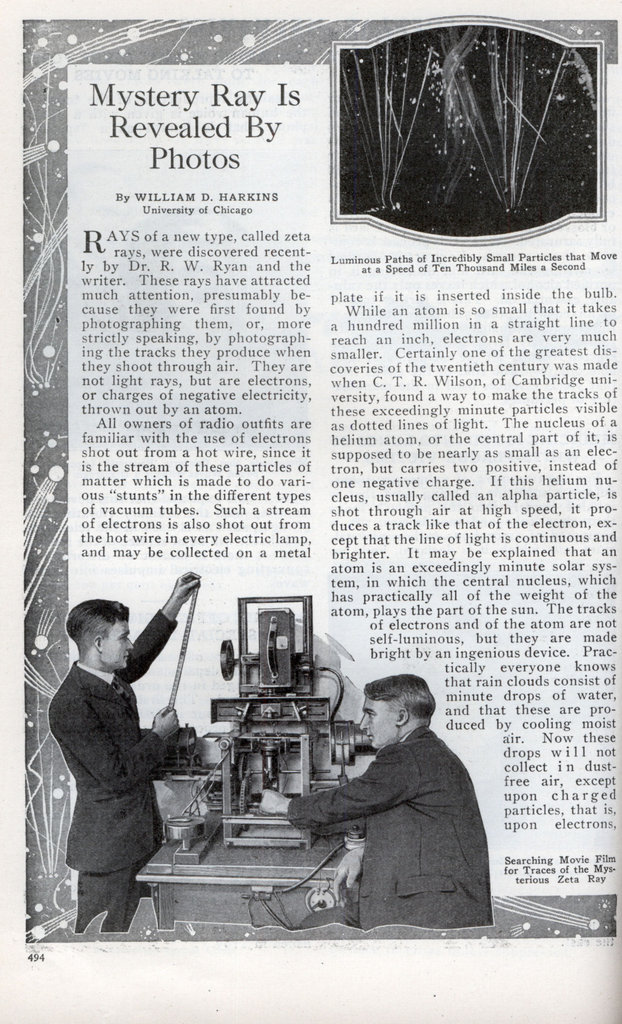 Mystery Ray Is Revealed By Photos

RAYS of a new type, called zeta rays, were discovered recently by Dr. R. W. Ryan and the writer. These rays have attracted much attention, presumably because they were first found by photographing them, or, more strictly speaking, by photographing the tracks they produce when they shoot through air. They are not light rays, but are electrons, or charges of negative electricity, thrown out by an atom.

All owners of radio outfits are familiar with the use of electrons shot out from a hot wire, since it is the stream of these particles of matter which is made to do various “stunts” in the different types of vacuum tubes. Such a stream of electrons is also shot out from the hot wire in every electric lamp, and may be collected on a metal plate if it is inserted inside the bulb.

While an atom is so small that it takes a hundred million in a straight line to reach an inch, electrons are very much smaller. Certainly one of the greatest discoveries of the twentieth century was made when C. T. R. Wilson, of Cambridge university, found a way to make the tracks of these exceedingly minute particles visible as dotted lines of light. The nucleus of a helium atom, or the central part of it, is supposed to be nearly as small as an electron, but carries two positive, instead of one negative charge. If this helium nucleus, usually called an alpha particle, is shot through air at high speed, it produces a track like that of the electron, except that the line of light is continuous and brighter. It may be explained that an atom is an exceedingly minute solar system, in which the central nucleus, which has practically all of the weight of the atom, plays the part of the sun. The tracks of electrons and of the atom are not self-luminous, but they are made bright by an ingenious device. Practically everyone knows that rain clouds consist of minute drops of water, and that these are produced by cooling moist air. Now these drops will not collect in dust-free air, except upon charged particles, that is, upon electrons, or upon atoms which are charged with positive electricity and are known as positive ions. What is done is to put air or another gas into a glass cylinder provided with a flat top and with a piston for a bottom. The gas is kept moist by wet gelatin. On one of the walls of the cylinder a minute particle of a substance similar to radium is fastened. In these experiments thorium C, which is very much more powerful than radium, in that it shoots off alpha particles with twenty-six thousand times the velocity of the fastest rifle bullet, was used. When these high-speed particles shoot through a gas they travel so fast that they have no time to pass around the atoms, so they go straight through them. Very rarely the alpha particle hits the nucleus of the atom through which it is passing, and rebounds, so a very sharp change of direction results whenever such a collision occurs.

The operation of the apparatus consists in suddenly pulling down the piston, thus expanding and cooling the moist air. Water drops form immediately, but only upon the electrons pulled out of the atoms, or the positively charged atoms from which electrons have been pulled, and these occur only in the line in which the fast alpha particle has moved. The brilliancy of these lines of minute water drops is due to the fact that two powerful searchlights are focused upon them.

The interest of the zeta rays results from the fact that they are exceedingly rare. Also there is no explanation of their peculiar form. They are about an eighth of an inch long and are highly curved. The discovery of these rays was partly accidental, though we were looking carefully for peculiar ways in which electrons may be ejected from atoms. The rays were found in photographs taken to show collisions between an alpha particle and the nucleus of an atom. Forty thousand such photographs were taken, and it is now planned to obtain two hundred and fifty thousand more.