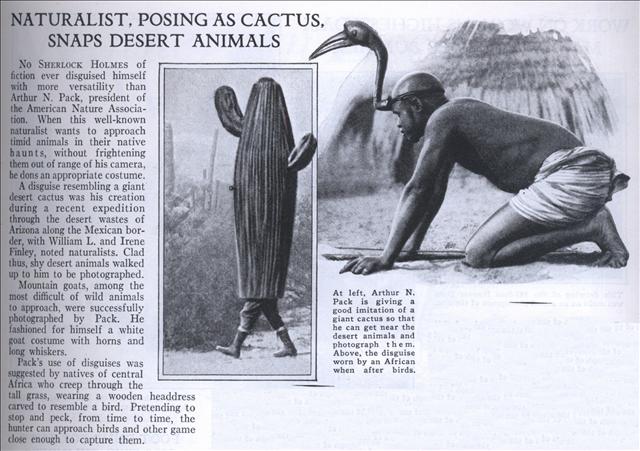 No Sherlock Holmes of fiction ever disguised himself with more versatility than Arthur N. Pack, president of the American Nature Association. When this well-known naturalist wants to approach timid animals in their native haunts, without frightening them out of range of his camera, he dons an appropriate costume.

A disguise resembling a giant desert cactus was his creation during a recent expedition through the desert wastes of Arizona along the Mexican border, with William L. and Irene Finley, noted naturalists. Clad thus, shy desert animals walked up to him to be photographed.

Mountain goats, among the most difficult of wild animals to approach, were successfully photographed by Pack. He fashioned for himself a white goat costume with horns and long whiskers.

Pack’s use of disguises was suggested by natives of central Africa who creep through the tall grass, wearing a wooden headdress carved to resemble a bird. Pretending to stop and peck, from time to time, the hunter can approach birds and other game dose enough to capture them.