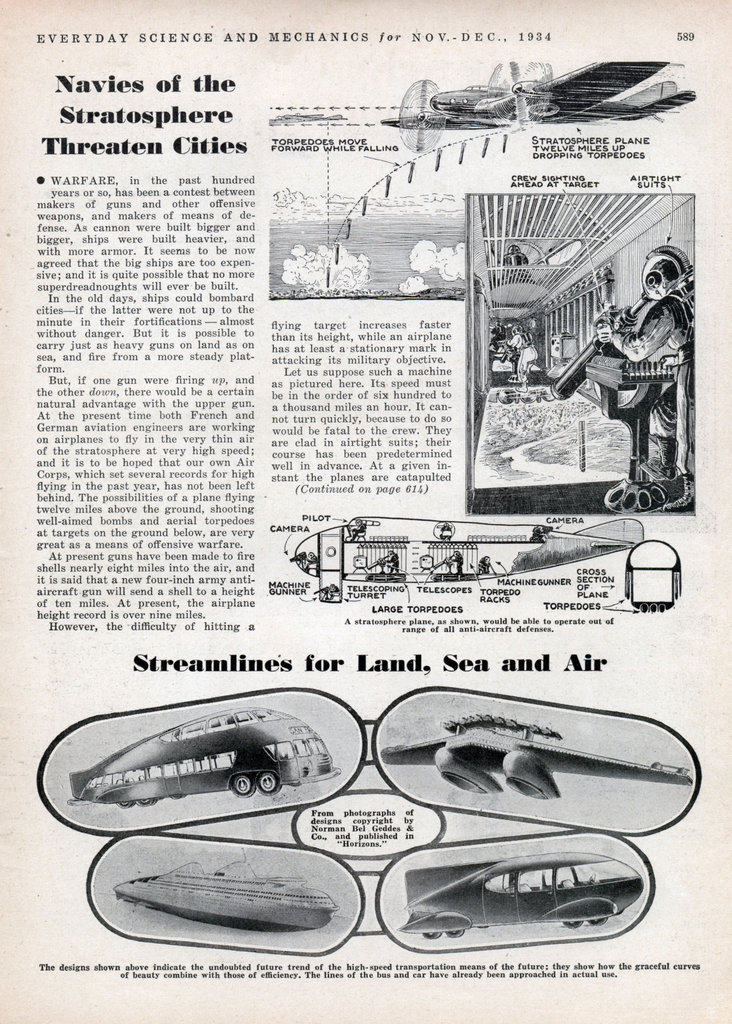 Navies of the Stratosphere Threaten Cities

WARFARE, in the past hundred years or so, has been a contest between makers of guns and other offensive weapons, and makers of means of defense. As cannon were built bigger and bigger, ships were built heavier, and with more armor. It seems to be now agreed that the big ships are too expensive ; and it is quite possible that no more superdreadnoughts will ever be built.

In the old days, ships could bombard cities—if the latter were not up to the minute in their fortifications — almost without danger. But it is possible to carry just as heavy guns on land as on sea, and fire from a more steady platform.

But, if one gun were firing up, and the other down, there would be a certain natural advantage with the upper gun. At the present time both French and German aviation engineers are working on airplanes to fly in the very thin air of the stratosphere at very high speed; and it is to be hoped that our own Air Corps, which set several records for high flying in the past year, has not been left behind. The possibilities of a plane flying twelve miles above the ground, shooting well-aimed bombs and aerial torpedoes at targets on the ground below, are very great as a means of offensive warfare.

At present guns have been made to fire shells nearly eight miles into the air, and it is said that a new four-inch army antiaircraft gun will send a shell to a height of ten miles. At present, the airplane height record is over nine miles.

However, the difficulty of hitting a flying target increases faster than its height, while an airplane has at least a stationary mark in attacking its military objective.

Let us suppose such a machine as pictured here. Its speed must be in the order of six hundred to a thousand miles an hour. It cannot turn quickly, because to do so would be fatal to the crew. They are clad in airtight suits; their course has been predetermined well in advance. At a given instant the planes are catapulted into the airway, from tracks perhaps a thousand feet in length.

They rise at a high angle until they reach their altitude; at a speed of ten miles a minute or more, they pass over the spot they are to attack. Ten miles before they reach it, the stratosphere gunners release torpedoes. These are blown free of their tubes, and the disturbed air around the plane, by compressed air, or light powder charges, and start falling. They acquire the speed of projectiles from cannon in the thin air. As the plane speeds on, they follow its forward motion, and, not long after it passes over the target, they strike and explode. It has been necessary, of course, to use automatic calculating ma- chines, of the “fire control” type, in aiming them. And, of course, it is impossible to determine in advance just what cross-currents of air the projectiles will go through; but the fire will be nearly as accurate as that of big cannon when the latter are used, as they are now, at eighteen or twenty miles.

Unless air defence can be stepped up proportionately, it would be practically impossible to parry such a raid. Even if the stratosphere plane were destroyed by a counter-attack, before it could return to its base, it would have done its damage, and struck its blow, before it arrived above the spot at which its projectiles were aimed.