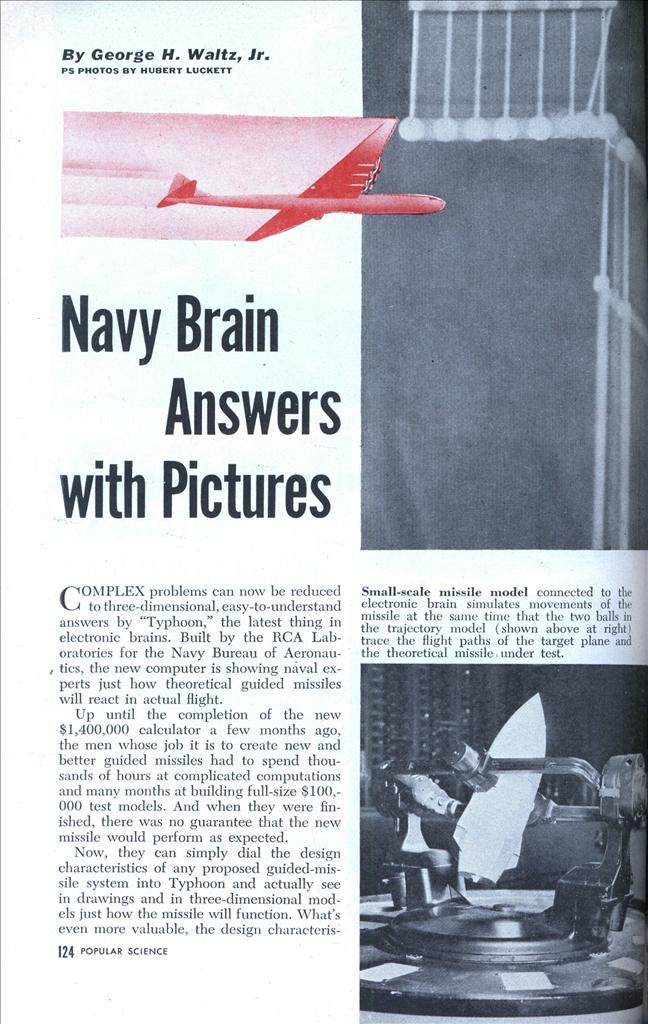 COMPLEX problems can now be reduced to three-dimensional, easy-to-understand answers by “Typhoon,” the latest thing in electronic brains. Built by the RCA Laboratories for the Navy Bureau of Aeronautics, the new computer is showing naval experts just how theoretical guided missiles will react in actual flight.

Up until the completion of the new $1,400,000 calculator a few months ago, the men whose job it is to create new and better guided missiles had to spend thousands of hours at complicated computations and many months at building full-size $100,000 test models. And when they were finished, there was no guarantee that the new missile would perform as expected.

Now, they can simply dial the design characteristics of any proposed guided-missile system into Typhoon and actually see in drawings and in three-dimensional models just how the missile will function. What’s even more valuable, the design characteris tics can be altered by twisting dials until the computer shows that the theoretical missile will track airplanes and score hits. And all this before a penny has been spent on costly missile construction.

Typhoon Tackles a Problem Most electronic brains buzz out answers that are mere figures. Not Typhoon. It actually demonstrates its answers in terms that even the layman can understand. When I first saw Typhoon operate recently at the RCA Laboratories in Princeton, N. J., the brain was set up to check the accuracy of a proposed radar-guided, rocket-propelled missile with a take-off speed of 720 m.p.h, against a bomber flying 360 m.p.h, at an altitude of 25,000 feet. Previously, 100 dials had been adjusted and some 6,000 plug-in connections had been made to feed the complicated problem into the brain.

When A. W. Vance, who developed the project, touched a red master switch on the long control console, the big brain went to work. As pilot lights flashed and relays clicked, two pens on each of two plotting boards—one board for the plan view, the other for elevation—began tracing out the flight paths of both the target airplane and the missile.

At the same time, two plastic balls suspended in a glass-walled booth and glowing under the illumination from ultraviolet lights, duplicated the movements of plane and missile in three dimensions. Nearby, a small-scale missile model, 12 inches long, 3/2 inches in diameter, and complete with operating control fins, went through all the motions, gyrations, and spins that the actual missile—if there were one—would go through on a flight to the target. In 60 seconds, the entire flight, which ended in a direct hit, had been simulated and recorded.

In one minute, the new computer, largest of its kind ever built, had made 250 additions, 67 multiplications, 30 integrations, and had solved 20 aerodynamic equations. All were carried on simultaneously with continuously varying factors—a chore that would have taken two mathematicians at least five years. Besides that, the brain had provided the answer in visual, understandable form as well as on records.

How would this same guided missile perform if the plane tried to avoid the missile by diving, zooming, and turning? To find out, evasive tactics were dialed into the portion of the brain that did the thinking for the plane. As I watched the two balls and the pens on the plotting boards, the theoretical “dog fight” came to life. I could see the zigzagging target plane being hunted by the guided projectile. I witnessed the actual hit.

A Cheek on New Theories With Typhoon, any guided missile problem can be run through over and over again. New theories can be tried and checked. The design of a missile can be varied for each run until the desired results are obtained. Thus, by avoiding the high cost of actual trial-and-error launching tests, the new brain can inform scientists how a missile will act under any set of conditions. It can help them to remove all the possible bugs long before the design leaves the drawing board.

Most electronic brains are either analogue computers (comparable to a slide rule) or digital computers (similar to an adding machine). Typhoon, however, is a combination of both and, by blending the two techniques in more complex forms, it achieves a flexibility and accuracy unattainable by either system alone. It is exact to better than one part in 25,000.

Typhoon’s nerve center consists of some 4,000 electron tubes, 600 supersensitive relays, several miles of intricate wiring, and thousands of condensers, resistors, and other components. Basically, it consists of five major sections—one for the missile, one for the system for guiding the missile, one for the target plane, one for calculating the results, and one for recording those results. It takes a staff of nine engineers and mathematicians plus six technical assistants to operate and maintain the computer. Also, since it seems that an electronic brain can get a cold in the head and not operate efficiently, the room in which the computer is housed is kept at a constant temperature of 75° F. and at a relative humidity of not more than 50 percent.

When solving a problem, the various varying factors enter the brain as voltages. These are then fed in the proper order to the components set up to add, subtract, multiply, and divide in the right sequence to provide a constantly changing answer. As a result, at any moment during a solution such things as the missile’s speed, yaw, pitch, roll, and fuel supply can be read from a bank of recorders. It is possible, for example, to determine the exact positions of each of the missile’s control fins at any instant.

Although the new computer, after it is installed in the Naval Research Laboratories at Johnsville, Pa., will be used principally to solve guided-missile problems., its abilities are by no means limited to that one function. Fed the characteristics of a new supersonic airplane design, the brain can tell you if the plane will fly as expected, and if not, why not. It can be used to pretest the hull designs for new surface ships and submarines or the streamlined shapes of bullets, bombs, and torpedoes.

Bigger Brain May Plot Defense And, unless its designers and users miss their guess, it will serve as a model for an even larger master calculator that will solve all the riddles connected with the successful defense of our cities and our coastlines against any possible enemy attack. The super-electronic brain they contemplate would be capable of duplicating all the possibilities of a combined land, sea, and air attack and illustrate in three dimensions the best possible methods of sure-fire defense!