Sadly this headline is just as applicable now as it was 45 years ago. 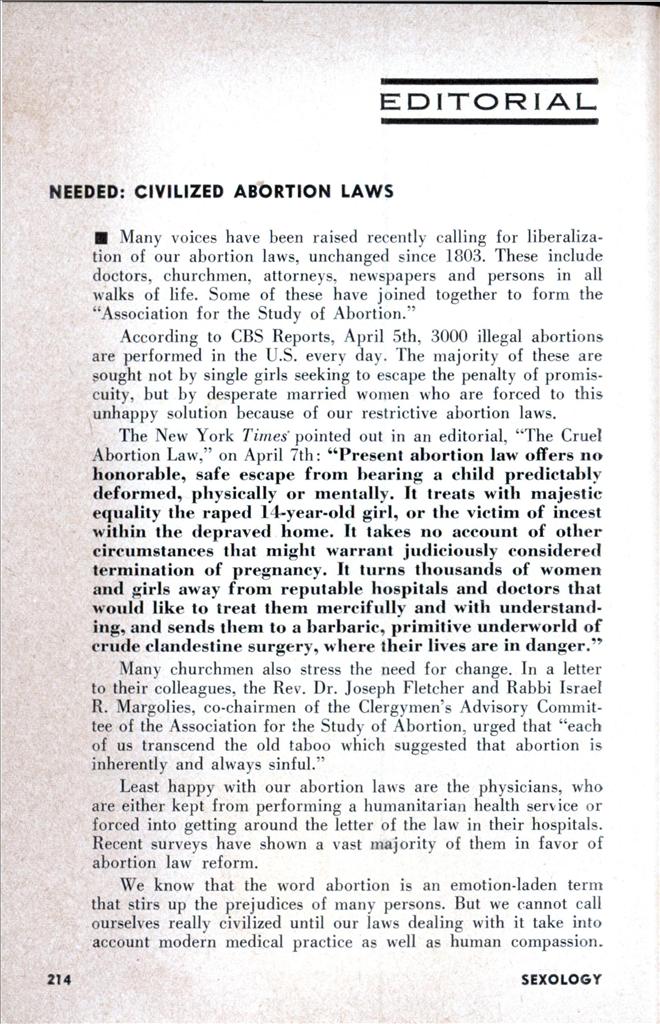 Many voices have been raised recently calling for liberalization of our abortion laws, unchanged since 1803. These include doctors, churchmen, attorneys, newspapers and persons in all walks of life. Some of these have joined together to form the “Association for the Study of Abortion.”

According to CBS Reports, April 5th, 3000 illegal abortions are performed in the U.S. every day. The majority of these are sought not by single girls seeking to escape the penalty of promiscuity, but by desperate married women who are forced to this unhappy solution because of our restrictive abortion laws.

The New York Times’ pointed out in an editorial, “The Cruel Abortion Law,” on April 7th: “Present abortion law offers no honorable, safe escape from hearing a child predictably deformed, physically or mentally. It treats with majestic equality the raped 14-year-old girl, or the victim of incest within the depraved home. It takes no account of other circumstances that might warrant judiciously considered termination of pregnancy. It turns thousands of women and girls away from reputable hospitals and doctors that would like to treat them mercifully and with understanding, and sends them to a barbaric, primitive underworld of crude clandestine surgery, where their lives are in danger.”

Many churchmen also stress the need for change. In a letter to their colleagues, the Rev. Dr. Joseph Fletcher and Rabbi Israel R. Margolies, co-chairmen of the Clergymen’s Advisory Committee of the Association for the Study of Abortion, urged that “each of us transcend the old taboo which suggested that abortion is inherently and always sinful.”

Least happy with our abortion laws are the physicians, who are either kept from performing a humanitarian health service or forced into getting around the letter of the law in their hospitals. Recent surveys have shown a vast majority of them in favor of abortion law reform.

We know that the word abortion is an emotion-laden term that stirs up the prejudices of many persons. But we cannot call ourselves really civilized until our laws dealing with it take into account modern medical practice as well as human compassion.