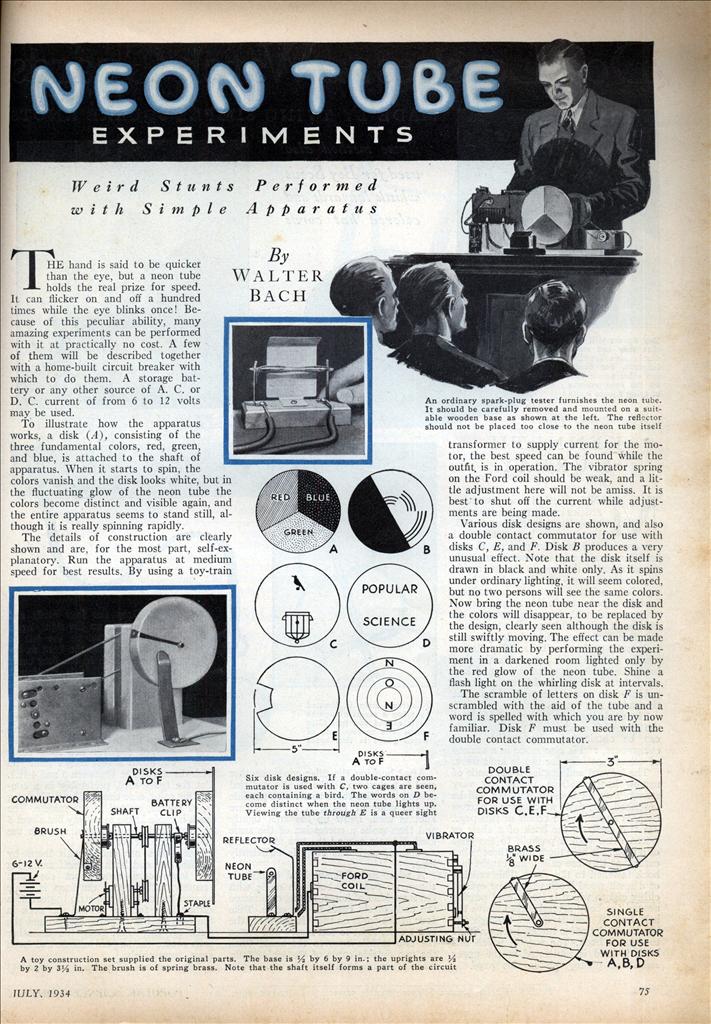 THE hand is said to be quicker than the eye, but a neon tube holds the real prize for speed. It can flicker on and off a hundred times while the eye blinks once! Because of this peculiar ability, many amazing experiments can be performed with it at practically no cost. A few of them will be described together with a home-built circuit breaker with which to do them. A storage battery or any other source of A. C. or D. C. current of from 6 to 12 volts may be used.

To illustrate how the apparatus works, a disk (A), consisting of the three fundamental colors, red, green, and blue, is attached to the shaft of apparatus. When it starts to spin, the colors vanish and the disk looks white, but in the fluctuating glow of the neon tube the colors become distinct and visible again, and the entire apparatus seems to stand still, although it is really spinning rapidly.

Various disk designs are shown, and also a double contact commutator for use with disks C, E, and F. Disk B produces a very unusual effect. Note that the disk itself is drawn in black and white only. As it spins under ordinary lighting, it will seem colored, but no two persons will see the same colors. Now bring the neon tube near the disk and the colors will disappear, to be replaced by the design, clearly seen although the disk is still swiftly moving. The effect can be made more dramatic by performing the experiment in a darkened room lighted only by the red glow of the neon tube. Shine a flash light on the whirling disk at intervals.

The scramble of letters on disk F is unscrambled with the aid of the tube and a word is spelled with which you are by now familiar. Disk F must be used with the double contact commutator.