New Berlin Hotel Has Rooms for Cars and Chauffeurs (Dec, 1930) 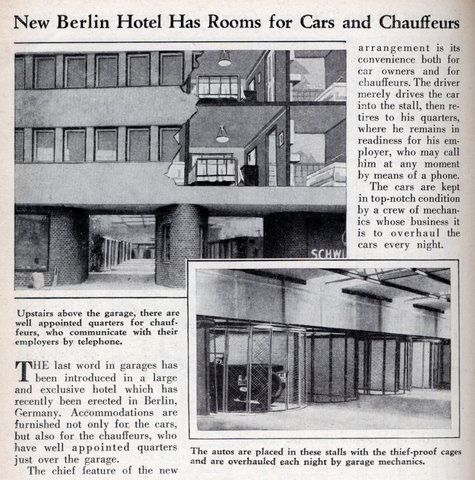 New Berlin Hotel Has Rooms for Cars and Chauffeurs

THE last word in garages has been introduced in a large and exclusive hotel which has recently been erected in Berlin, Germany. Accommodations are furnished not only for the cars, but also for the chauffeurs, who have well appointed quarters just over the garage.

The chief feature of the new arrangement is its convenience both for car owners and for chauffeurs. The driver merely drives the car into the stall, then retires to his quarters, where he remains in readiness for his employer, who may call him at any moment by means of a phone.

The cars are kept in top-notch condition by a crew of mechanics whose business it is to overhaul the cars every night.