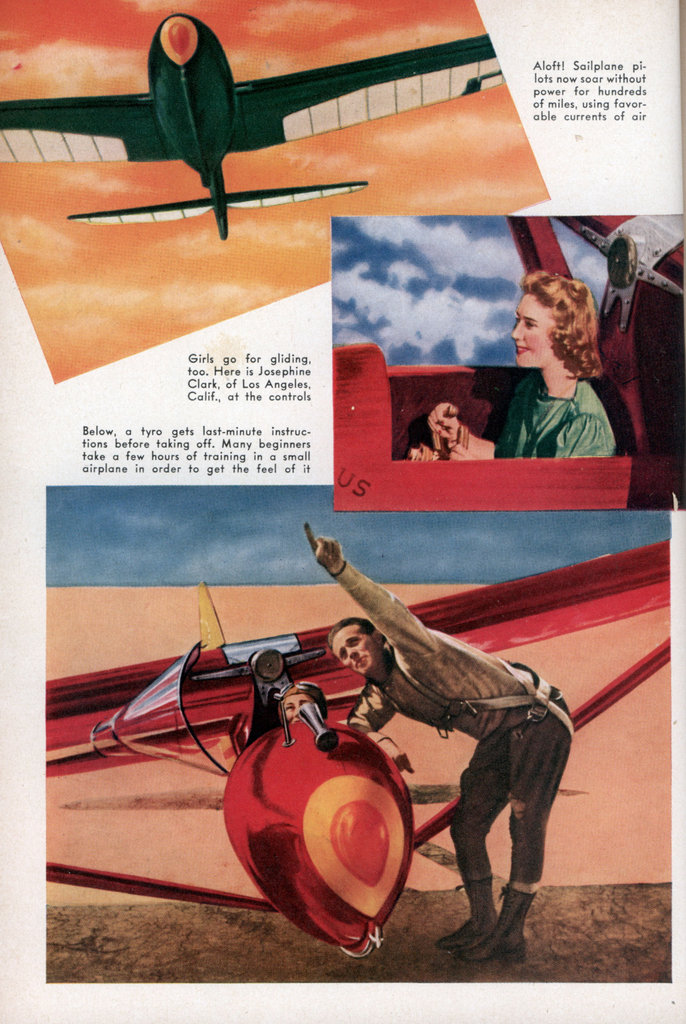 Thrilling Aerial Sport Gains Wider Popularity Through Knockdown Kits That Enable Anybody To Build His Own Sailplane, Buying All the Materials on a Pay-as-You-Go Plan

SOARING on wings assembled in back yards and home workshops, hundreds of glider enthusiasts are piloting their own sailplanes. Bought on the installment plan, their ships come in knockdown kits. Piecemeal buying enables boys and men alike to build gliders. As a result, flying without power is sweeping the nation. More than forty meets will be staged this year, from the big national events like the one held annually at Elmira, N. Y., to small sectional competitions on farm lots, desert lakes, and mountain pastures. Two hundred clubs have been formed with 2,000 members. Aside from the kits, would-be soarers need purchase few accessories. Tow rope, a couple of wrenches, air-speed meter, and a sensitive variometer fill the bill. In many towns groups club together, building their own soaring planes and cooperating in flying. At a cost far less than that of a powered plane, their members enjoy the thrills and pleasures of flying. Danger of injury is less, too, for they can land the light craft at comparatively slow speeds.

Several types of knockdown gliders have been evolved, from heavier primary trainers to streamline planes capable of soaring to great heights and flying long distances. In one novel ship, designed by Hawley Bowlus, pioneer American glider pilot and builder, the pilot sits in a podlike nacelle suspended from the wings, which are attached to the tail by a duralumin boom six inches in diameter. Sailplanes of this type, which weigh only 250 pounds, glide best at a speed of forty-two miles an hour and land at twenty-seven, but may be dived 100 miles an hour and put through aerobatics.

For $175 to $385, which is paid as you build, plus 150 hours, more or less, of easy labor, you acquire the parts and piece together your own sailplane. Usually, rudder and elevators come first. After assembling these, you write for the wing struts and fin. Weeks pass, and you’re ready for the wings, which will roll up in the expressman’s truck complete with spar and leading edge. You need only apply finishing touches. Next, the ailerons. Finally, the fuselage and miscellaneous parts.

Now let’s suppose your sailplane has been assembled and is ready to fly. Old hands at gliding say it’s a good plan to take four or five hours of dual-control instruction in a small airplane. This experience will give you the feel of handling aircraft controls. At last, you drive to a level field, bolt your ship together, and start “dragging.” Using an automobile for motive power, or a horse if there’s a good head wind to help, you roll along the earth three or four times at a speed approaching thirty miles an hour. Next, increasing the speed to forty, you pull up forty or fifty feet, making easy right and left turns. Finally you pull up 300 feet, release the tow rope, make a complete circle, and land.

Unlike such daring veterans as Bowlus and Don Stevens, who learned to soar in rising currents by trial and error, you will need two instruments, a speed meter and a sensitive variometer, costing about thirty-five dollars. Several years ago sailplane pilots thought they required hills to deflect winds upward, thus providing rising currents of air to lift their wings. Then Dr. Carl Lange at the Massachusetts Institute of Technology discovered that “thermals,” or vertical currents caused by changes in temperature, produce the same effect.

By observing the variometer you literally can see the air rising and falling. This instrument consists of two tapered glass tubes, each containing a small bead, connected to a vacuum bottle. As the plane goes up, air rushes out of the bottle, raising the green bead; when you come down, the red bead rises. So delicate is the mechanism that even the mildest dips are registered.

A glider pilot needs neither hills nor winds to begin his flights. In fact, thermals, it has been learned, make the midwestern plains better gliding areas than the mountains of East and West. Given a good circling run and a 6,000-foot tow rope, he can climb 2,500 feet in ten minutes before cutting loose. How long he remains aloft depends upon his skill in finding thermals.

“As we learn to take advantage of thermals,” says Bowlus, “we shall experience a tremendous increase in really skilled sailplaners. When I take off from a mountain, I first climb several hundred feet, then head downwind toward a near-by valley in search for the largest possible number of these heat drafts in the shortest time. If one could find enough favorable thermals, he could glide across the continent.”

Until recently, most glider pilots were contented merely with soaring to moderate altitudes and remaining in the vicinity of the home field. Taking lessons from pilots of motored planes, many now remain aloft for long periods, and frequently make “goal” flights to distant places.

Many men interested in this sport look beyond mere thrills. They see another objective â€” training thousands of pilots who could be transferred to the cockpits of military planes in an emergency. Army and Navy officers expect to recruit many pilots among the sailplane soarers. Perhaps, as the movement grows, America’s packaged gliders will help give us a formidable force of self-trained flyers.