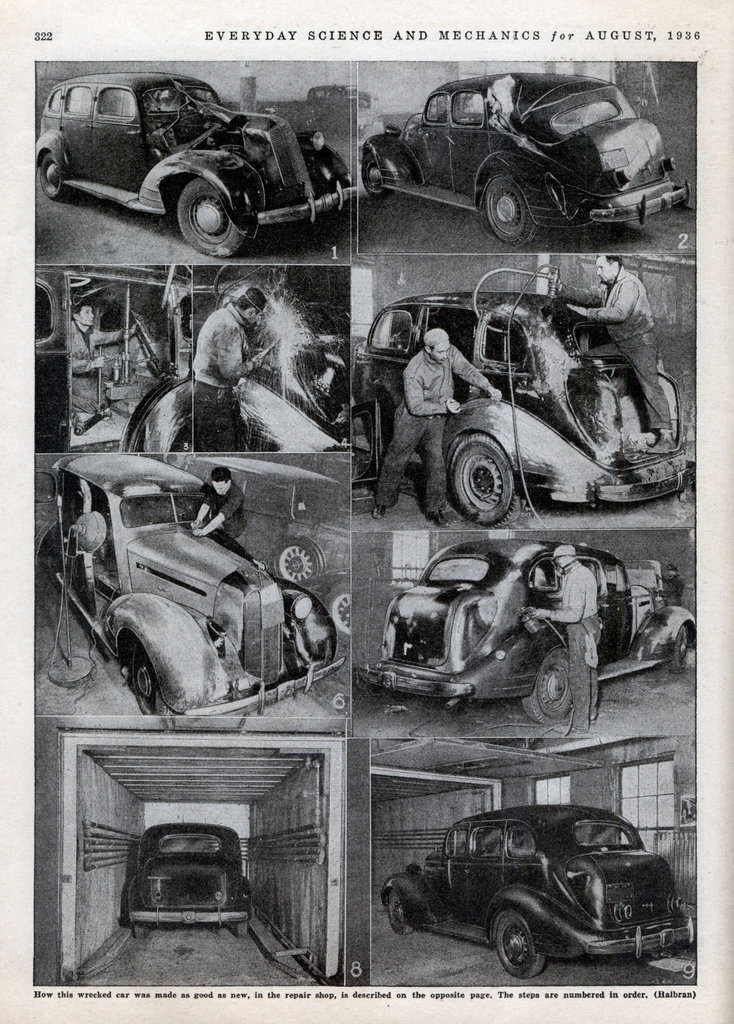 YEARS ago, a joke was very popular, concerning a very popular car. In brief, it ran that the would-be owner of a Model Zee had torn down an old shed and, reading that the manufacturer of his car was a large purchaser of scrap iron, shipped him a large crate of corrugated roofing, to apply on the price of a new shivver. A few days passed, and he received a letter from the service department of the factory: “Dear Sir. We are unable to tell what kind of accident your car met with, but we will repair it, as good as new, for $49.98.”

Almost as astonishing a repair service has been developed, to meet the needs of the autoist who has had an accident. In the case illustrated on the opposite page, the car owner was the victim of a double accident. He encountered a large truck, which skidded into him, head-on, at a dangerous turn. The car owner got out to discuss the subject with the truck driver andâ€”bang!â€”a second truck crashed into the rear of his sedan. As will be seen from the photos (1) and (2), it seemed as crushed as a new derby hat on which a circus fat lady has seated herself.

And yet, the owner did not have to get a new body. The car was towed to a shop specializing in renovation. The first step (3) was to remove the wrinkles. Hydraulic jacks, with special ends, were applied to the dents; and the original contour was restored by gradual pressure.

However, the marks of cuts and creases were still apparent. The welder (4) now got busy and, when he was done, the body was as strong as ever. A few bumps remained to be rounded off symmetrically; and this was done (5) by a larger hydraulic device which applied pressure from outside as well as inside. This instrument (it has a U-arm spanning the top on which it is working) is comparable to a smoothing iron on a wrinkled pair of trousers. While it was in operation, another mechanic was filing off the inequalities left on the mudguard by the welder.

The car, restored to its original shape, now required refinishing. Fine sandpaper was used (6) to make the surface uniformly bright and even, as before the factory coatings were applied. In (7) we see the car with the light spots where accident and repairs have taken off the original color. It was sprayed with a priming coat, and then with its true color.

When all the finish had been restored the car was rolled into an oven (8) where it was left to bake all night, hardening the lacquer coat. The temperature (180Â°) is not sufficient to injure tires or any other part of the car.

In the morning the car was taken out, striped and polished; and finally we have it (9) looking just as it did when it left the factory. Compare with its picture (2) “before taking”â€”and it is evident that the operation has been a success and the patient will do well.

The photographs were taken by the car over a period of several days, as it passed through the different stages. The cost of the work was much less than that of obtaining a new body from the factory.