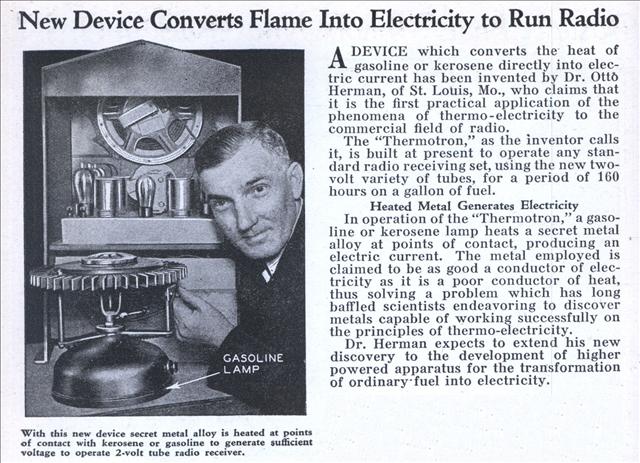 A DEVICE which converts the heat of gasoline or kerosene directly into electric current has been invented by Dr. Otto Herman, of St. Louis, Mo., who claims that it is the first practical application of the phenomena of thermo-electricity to the commercial field of radio.
The “Thermotron,” as the inventor calls it, is built at present to operate any standard radio receiving set, using the new two-volt variety of tubes, for a period of 160 hours on a gallon of fuel.

In operation of the “Thermotron,” a gasoline or kerosene lamp heats a secret metal alloy at points of contact, producing an electric current. The metal employed is claimed to be as good a conductor of electricity as it is a poor conductor of heat, thus solving a problem which has long baffled scientists endeavoring to discover metals capable of working successfully on the principles of thermo-electricity.
Dr. Herman expects to extend his new discovery to the development of higher powered apparatus for the transformation of ordinary fuel into electricity.