Science And Mechanics
Issue: Jan, 1933
Posted in: General, House and Home
4 Comments on New Devices for General Use (Jan, 1933) 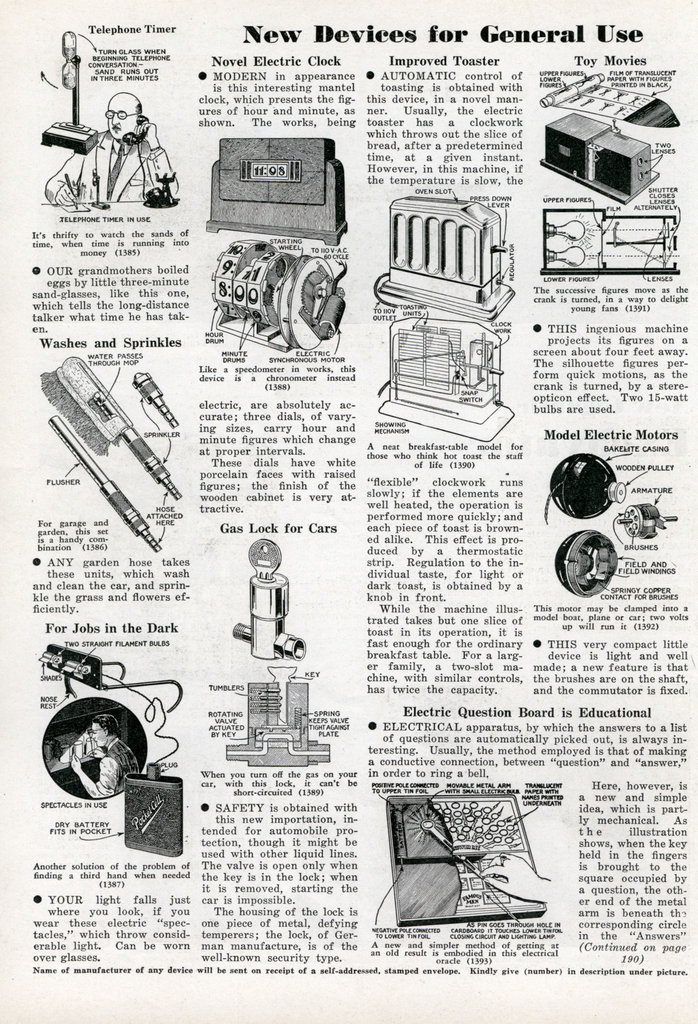 New Devices for General Use

Telephone Timer
â€¢ OUR grandmothers boiled eggs by little three-minute sand-glasses, like this one, which tells the long-distance talker what time he has taken.

Washes and Sprinkles
â€¢ ANY garden hose takes these units, which wash and clean the car, and sprinkle the grass and flowers efficiently.

For Jobs in the Dark
â€¢ YOUR light falls just where you look, if you wear these electric “spectacles,” which throw considerable light. Can be worn over glasses.

Novel Electric Clock
â€¢ MODERN in appearance is this interesting mantel clock, which presents the figures of hour and minute, as shown. The works, being electric, are absolutely accurate; three dials, of varying sizes, carry hour and minute figures which change at proper intervals. These dials have white porcelain faces with raised figures; the finish of the wooden cabinet is very attractive.

Gas Lock for Cars
â€¢ SAFETY is obtained with this new importation, intended for automobile protection, though it might be used with other liquid lines. The valve is open only when the key is in the lock; when it is removed, starting the car is impossible. The housing of the lock is one piece of metal, defying temperers; the lock, of German manufacture, is of the well-known security type.

Improved Toaster
â€¢ AUTOMATIC control of toasting is obtained with this device, in a novel manner. Usually, the electric toaster has a clockwork which throws out the slice of bread, after a predetermined time, at a given instant. However, in this machine, if the temperature is slow, the “flexible” clockwork runs slowly; if the elements are well heated, the operation is performed more quickly; and each piece of toast is browned alike. This effect is produced by a thermostatic strip. Regulation to the individual taste, for light or dark toast, is obtained by a knob in front.

While the machine illustrated takes but one slice of toast in its operation, it is fast enough for the ordinary breakfast table. For a larger family, a two-slot machine, with similar controls, has twice the capacity.

Electric Question Board is Educational
â€¢ ELECTRICAL apparatus, by which the answers to a list of questions are automatically picked out, is always interesting. Usually, the method employed is that of making a conductive connection, between “question” and “answer,” in order to ring a bell.

Here, however, is a new and simple idea, which is partly mechanical. As the illustration shows, when the key held in the fingers is brought to the square occupied by a question, the other end of the metal arm is beneath the corresponding circle in the “Answers”

Toy Movies
â€¢ THIS ingenious machine projects its figures on a screen about four feet away. The silhouette figures perform quick motions, as the crank is turned, by a stere-opticon effect. Two 15-watt bulbs are used.

Model Electric Motors
â€¢ THIS very compact little device is light and welli made; a new feature is that the brushes are on the shaft, and the commutator is fixed.