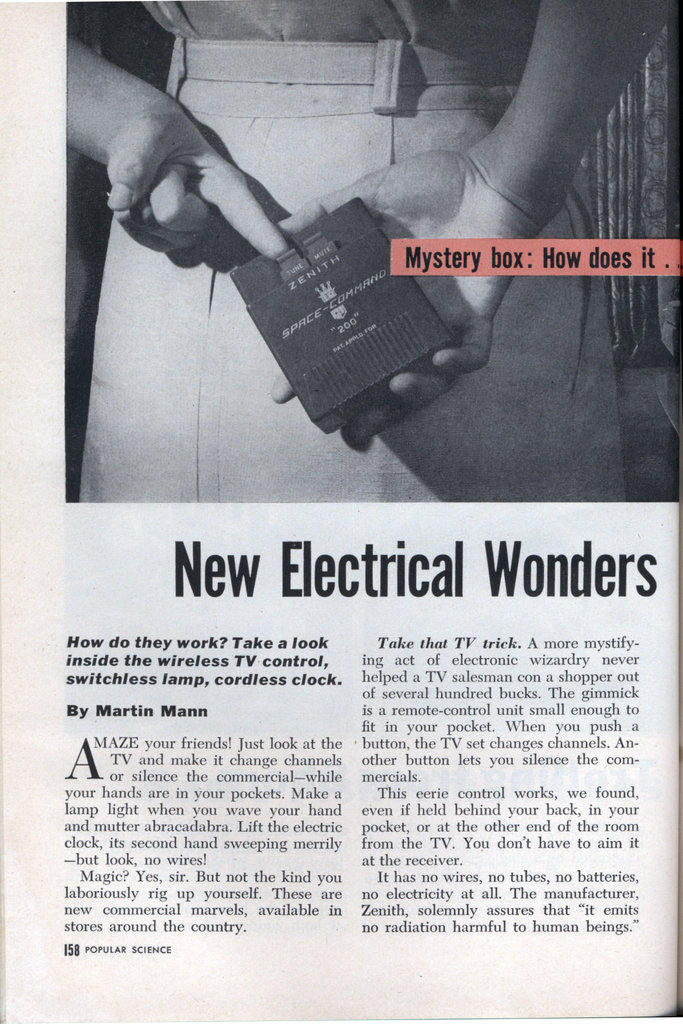 How do they work? Take a look inside the wireless TV control, switchless lamp, cordless clock.

AMAZE your friends! Just look at the TV and make it change channels or silence the commercialâ€”while your hands are in your pockets. Make a lamp light when you wave your hand and mutter abracadabra. Lift the electric clock, its second hand sweeping merrily â€”but look, no wires!

Magic? Yes, sir. But not the kind you laboriously rig up yourself. These are new commercial marvels, available in stores around the country.

Take that TV trick. A more mystifying act of electronic wizardry never helped a TV salesman con a shopper out of several hundred bucks. The gimmick is a remote-control unit small enough to fit in your pocket. When you push a button, the TV set changes channels. Another button lets you silence the commercials.

This eerie control works, we found, even if held behind your back, in your pocket, or at the other end of the room from the TV. You don’t have to aim it at the receiver.

It has no wires, no tubes, no batteries, no electricity at all. The manufacturer, Zenith, solemnly assures that “it emits no radiation harmful to human beings.”

We took one apart, and by gosh they’re right. It won’t even harm dogs or cats. Inside the case are some metal rods, similar to the tuning forks that piano tuners use. The push buttons release tiny hammers that strike the rods and make them ring, in ultrasonic tones so high in pitch that they cannot be heard. These sound waves vibrate about 40,000 cycles per second, twice as high as the shrillest note people can hear, and too high even for dogsâ€”we tried it.

The television receiver that dances to this silent music has a microphone to pick up the ultrasonic tones, and a five-tube electronic brain to amplify the signal and figure out what you want done.

The five-tube brain separates the signals according to their frequency. The muting signal goes to a tricky relay that turns a toggle switch off if it’s on, on if it’s off. The station-changing signal works another relay that, in turn, puts an electric motor and gear train to work turning the selector knob.

Rube Goldberg himself might have invented that one. You can show off this kind of wizardry for $250 up.

The “switchless” lamps really have switches, of course. They’re new kinds that don’t look at all like switches. The trickiest is called Touchtron. You touch your hand to the lamp base and the light goes on; touch again and the light will go off.

The secret is a vacuum tube, relay and condenser inside the lamp base, plus a metal ring that looks like decoration around the lamp. The tube stays on all the time but burns only 10 cents’ worth of electricity a year. Ordinarily it will not let enough current pass through to throw the switching relay. But when you touch both the lamp base and the metal ring, your hand completes a circuit. This decreases electrical impedance, the tube passes more current, the condenser fires, and the relay switches the lamp on (or off). There is no shock hazard.

Another new switch adds convenience to three-way lamps, the ones with bulbs that go low, medium or bright. Called a drum switch, it fits on any narrow part of the lamp body; it is not part of the socket and you don’t have to reach under the shade to work it. It also operates in either directionâ€”no more switching through the whole cycle to get the brightness you want.

The GE drum switch and the electronic Touchtron are available on numerous brands of commercial lamps, but neither is yet sold separately in hardware stores for homemade lamps.

If you want a lamp that lights without any attention at all from you, a little plastic box does the job. Plug box into wall outlet, lamp into box, and the lamp goes on at dusk, off at dawn.

This magic box contains a photoelectric cell, a small wafer that conducts electricity well when light shines on it, not so well when no light hits it. During daylight, it passes enough electricity to hold open a relay, so that current cannot reach the bulb. When daylight dims, the photocell blocks current flow to the relay coil, the relay contacts snap shut, and the lamp lights. The photocell must be mounted at a window facing outdoors, but the lamp can be anywhere that its cord will reach.

Automatic switches of this type have long been used to control street lights. The home unit is now made by Fisher-Pierce Co., Boston 85, and costs $15.95.

The cordless electric clock uses the kind of magic that comes to real money. The clock costs 8195, plus tax, and it won’t keep better time than a four-buck kitchen clock with wires. But its eerie operation really triggers your take-it-apart instinct. Only after considerable prodding from PSM would General Electric declassify the details.

The wireless clock is wirelessâ€”it’s radio-controlled. It does not depend on signals from ordinary radio stations, but on the 60-cycle electromagnetic waves that are always radiating from ordinary wiring and appliances.

Inside the clock case is an antenna-just like the ones in small radiosâ€”that picks up the 60-cycle radiation and feeds it to an amplifier. But a whole raft of amplifiers couldn’t boost the airborne signal enough to drive even the flea-power clock motor. That’s where the trick comes in.

The amplified 60-cycle signal controls the frequency of a battery-powered local oscillator. Now the oscillator frequency may vary, but the power-line frequency picked out of the air won’t. So the two mesh, and the oscillator locks in with the 60-cycle radiation from the air.

The oscillator output drives a synchronous clock motor. That way the clock motor, although battery-operated, gets 60-cycle power just as precisely regulated as the house current that runs ordinary electric clocks.

What will they think of next? The electronic wizards are busily contriving still newer magic to pop the customers’ eves. The trick we’d like to see is a TV controlâ€”with or without wiresâ€”that not only picks out the programs but also tells you in advance whether or not the show is going to be any good.