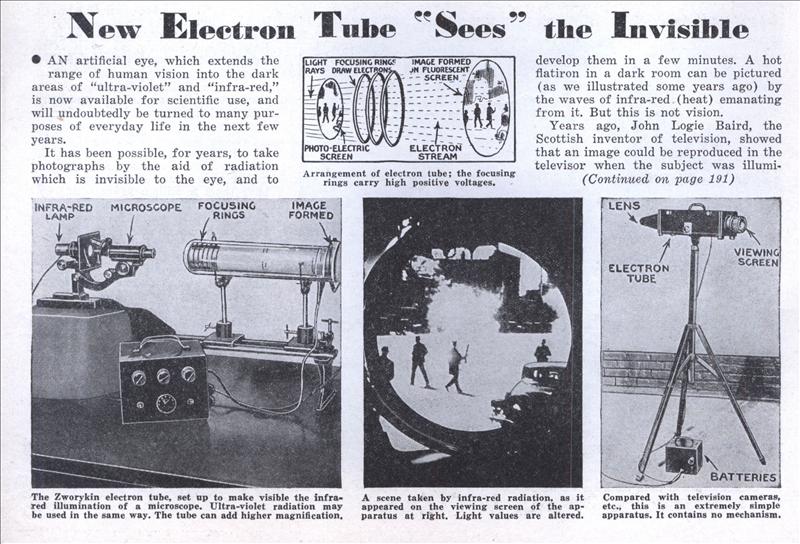 AN artificial eye, which extends the range of human vision into the dark areas of “ultra-violet” and “infra-red,” is now available for scientific use, and will undoubtedly be turned to many purposes of everyday life in the next few years.

It has been possible, for years, to take photographs by the aid of radiation which is invisible to the eye, and to develop them in a few minutes. A hot flatiron in a dark room can be pictured (as we illustrated some years ago) by the waves of infra-red (heat) emanating from it. But this is not vision.

Years ago, John Logie Baird, the Scottish inventor of television, showed that an image could be reproduced in the televisor when the subject was illuminated by infra-red rays in an absolutely dark room. Mr. Baird proposed the “Noctovisor” or nightseer—a television apparatus working in darkness, or even in fog— which would enable a ship or a plane to find its way where human eyes were useless.

A further step has been taken by Dr. Zworykin, the inventor of the Iconoscope television system. His electron tube works on the same fundamental principle as the “electron microscope” which we have also described in past issues. That is, a light-image or picture is focused on a screen, just as in a camera. But this screen, instead of ground glass, is a coating of the element caesium and silver oxide; which, when illuminated by radiation of a suitable wavelength, throws off electrons. If we had electric eyes, we would see electrons boiling like steam off the light areas on the screen, while the dark ones seemed cold.

These electrons, ordinarily, would fly in all directions; but there are a set of “focusing rings” in the tube which pull them forward in practically a straight line— just as though we had, above boiling water, a large suction pipe drawing the vapor straight up. By long experiment and careful designing, it has been possible to draw these electrons into a stream which has the same corresponding areas of light and dark throughout its length—like a mosaic stick from which slices are cut of uniform design. The electrons strike on a fluorescent screen—that is, one which lights up when and where they hit it—and there is reproduced the original scene, enlarged, if desired. The only point in that, since we cannot see infra-red rays (or ultra-violet) we cannot form any conception of the color which they represent, any more than a color-blind person can imagine what red is like.

The illustration of the image on the viewing screen, represents something that the eye could not see—the radiation of 13,000 Angstrom units wavelength. This is infra-red; visible light runs from about 3,500 Angstroms (violet) up to about 6,500 Angstroms (deep red).

Another purpose, to which the same principle is applied, is that of microscopic work. Illuminating minute objects with infra-red sometimes brings out details which do not appear in visible light. The electron tube is placed in position, looking down the barrel of a microscope, to which an infrared lamp has been attached; on its screen will then appear a highly-magnified image of the microscope’s field. It is equally possible to do this with ultra-violet, which is used in microscopic work to obtain photographs.

Dr. Zworykin, as illustrated in this magazine some time, suggested applying his Iconoscope to a telescope. If the electron tube were similarly put at the eyepiece of a telescope, and adjusted for infra-red reception, an astonishing change would take place. Some of the brightest and hottest stars, with their blue-light, would disappear, while others much cooler and less conspicuous would flare out with their infra-red radiation. The aspect of the heavens would seem quite altered.