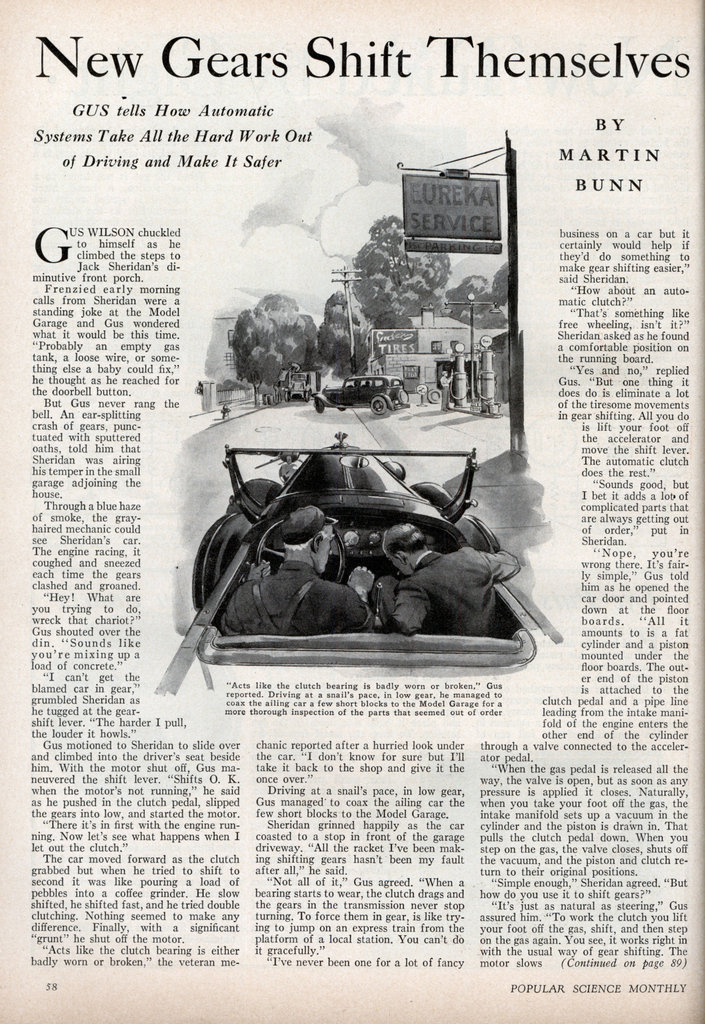 GUS WILSON chuckled to himself as he climbed the steps to Jack Sheridan’s diminutive front porch.

Frenzied early morning calls from Sheridan were a standing joke at the Model Garage and Gus wondered what it would be this time. “Probably an empty gas tank, a loose wire, or something else a baby could fix,” he thought as he reached for the doorbell button.

But Gus never rang the bell. An ear-splitting crash of gears, punctuated with sputtered oaths, told him that Sheridan was airing his temper in the small garage adjoining the house.

Through a blue haze of smoke, the gray-haired mechanic could see Sheridan’s car. The engine racing, it coughed and sneezed each time the gears clashed and groaned.

“Hey! What are you trying to do, wreck that chariot?” Gus shouted over the din. “Sounds like you’re mixing up a load of concrete.”

“I can’t get the blamed car in gear,” grumbled Sheridan as he tugged at the gearshift lever. “The harder I pull, the louder it howls.”

Gus motioned to Sheridan to slide over and climbed into the driver’s seat beside him. With the motor shut off, Gus maneuvered the shift lever. “Shifts O. K. when the motor’s not running,” he said as he pushed in the clutch pedal, slipped the gears into low, and started the motor.

“There it’s in first with the engine running. Now let’s see what happens when I let out the clutch.”

The car moved forward as the clutch grabbed but when he tried to shift to second it was like pouring a load of pebbles into a coffee grinder. He slow shifted, he shifted fast, and he tried double clutching. Nothing seemed to make any difference. Finally, with a significant “grunt” he shut off the motor.

“Acts like the clutch bearing is either badly worn or broken,” the veteran mechanic reported after a hurried look under the car. “I don’t know for sure but I’ll take it back to the shop and give it the once over.”

Driving at a snail’s pace, in low gear, Gus managed’ to coax the ailing car the few short blocks to the Model Garage.

Sheridan grinned happily as the car coasted to a stop in front of the garage driveway. “All the racket I’ve been making shifting gears hasn’t been my fault after all,” he said.

“Not all of it,” Gus agreed. “When a bearing starts to wear, the clutch drags and the gears in the transmission never stop turning. To force them in gear, is like trying to jump on an express train from the platform of a local station. You can’t do it gracefully.”

“I’ve never been one for a lot of fancy business on a car but it certainly would help if they’d do something to make gear shifting easier,,, said Sheridan.

“How about an automatic clutch?”

“That’s something like free wheeling, isn’t it?” Sheridan asked as he found a comfortable position on the running board.

“Yes and no,” replied Gus. “But one thing it does do is eliminate a lot of the tiresome movements in gear shifting. All you do is lift your foot off the accelerator and move the shift lever.

The automatic clutch does the rest.”

“Sounds good, but I bet it adds a lot of complicated parts that are always getting out of order,” put in Sheridan.

“Nope, you’re wrong there. It’s fairly simple,” Gus told him as he opened the car door and pointed down at the floor boards. “All it amounts to is a fat cylinder and a piston mounted under the floor boards. The outer end of the piston is attached to the clutch pedal and a pipe line leading from the intake manifold of the engine enters the other end of the cylinder through a valve connected to the accelerator pedal.

“When the gas pedal is released all the way, the valve is open, but as soon as any pressure is applied it closes. Naturally, when you take your foot off the gas, the intake manifold sets up a vacuum in the cylinder and the piston is drawn in. That pulls the clutch pedal down. When you step on the gas, the valve closes, shuts off the vacuum, and the piston and clutch return to their original positions.

“Simple enough,” Sheridan agreed. “But how do you use it to shift gears?”

“It’s just as natural as steering,” Gus assured him. “To work the clutch you lift your foot off the gas, shift, and then step on the gas again. You see, it works right in with the usual way of gear shifting. The motor slows down when the shift is made and speeds up as the clutch begins to take hold.”

“By the way, Gus, that reminds me. A fellow said something the other day about a new automatic gear shift that’s just come out on a new car. Is there anything in it?”

“Sure, if you don’t like to shift gears,” Gus replied. “The general idea is not so new. In my younger and palmier days, I had an automatic gear shift on my car. You had to push buttons to change gears.”

“Do you have to push buttons on the new one?” Sheridan asked.

“NO, THE new one is really automatic. It does most of the work of gear shifting for you and does it better than you could do it yourself. All you do is step on the gas and centrifugal force does the rest.”

“Plenty,” Gus said. “The whole idea is based on it. A set of governor weights fly out and work a clutch that throws the car into high gear when it reaches a certain speed. Once you start the car, the governor weights do the rest. When you slow down, the weights drop back into place and the car runs in low. When you speed up, it shifts back into high automatically. It selects the gear that’s best for the speed and power needed.”

“Only two speeds ahead?” Sheridan interrupted.

“Only two in the regular driving range,” Gus explained, but by turning a small gear-selector handle on the dash, you can obtain an auxiliary low range having two automatically selected gear ratios. Actually that’s four speeds ahead, but only two are used for regular driving. The two others are for tough pulling.”

“How about the clutch? Do you have to use it at all?”

“Simply move the selector handle after pushing in the clutch,” said Gus.

“Can you ‘free wheel’ with an automatic transmission?”

“NOT with that type, but an automatic gear-shift arrangement just developed in Detroit has the free-wheeling feature. Like that clutch I was telling you about a few minutes ago, it’s operated by a vacuum.

“It has a master vacuum clutch and three separate vacuum gear clutches that are controlled by a centrifugal governor attached to the main drive shaft. As the driver presses down on the accelerator in starting, the intake manifold vacuum decreases. This engages the first transmission clutch and then the main clutch. The car is then in low. When the car speeds up, the governor shifts to the second gear position. Then the driver just takes his foot off the gas and steps on it again slowly. That engages the second gear clutch. To shift to high, he just does the same thing all over again.”

“Gosh, in a few years an ordinary car like mine will be an antique,” grinned Sheridan.

“Just the same as your car makes a 1925 model look like an antique,” Gus agreed. “It’s been that way in the automobile game as long as I rememberâ€”and driving has been getting easier and safer all the time.”