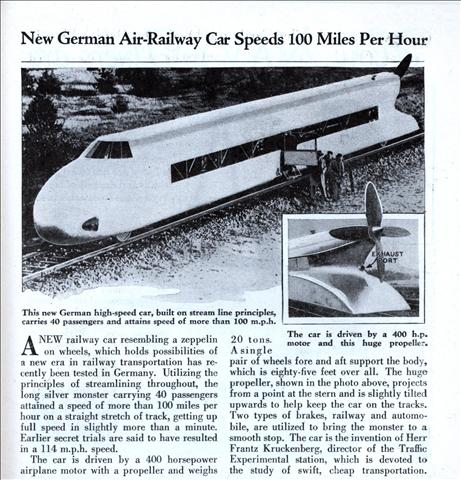 A NEW railway car resembling a zeppelin on wheels, which holds possibilities of a new era in railway transportation has recently been tested in Germany. Utilizing the principles of streamlining throughout, the long silver monster carrying 40 passengers attained a speed of more than 100 miles per hour on a straight stretch of track, getting up full speed in slightly more than a minute. Earlier secret trials are said to have resulted in a 114 m.p.h, speed.

The car is driven by a 400 horsepower airplane motor with a propeller and weighs 20 tons.

A single pair of wheels fore and aft support the body, which is eighty-five feet over all. The huge propeller, shown in the photo above, projects from a point at the stern and is slightly tilted upwards to help keep the car on the tracks. Two types of brakes, railway and automobile, are utilized to bring the monster to a smooth stop. The car is the invention of Herr Frantz Kruckenberg, director of the Traffic Experimental station, which is devoted to the study of swift, cheap transportation.