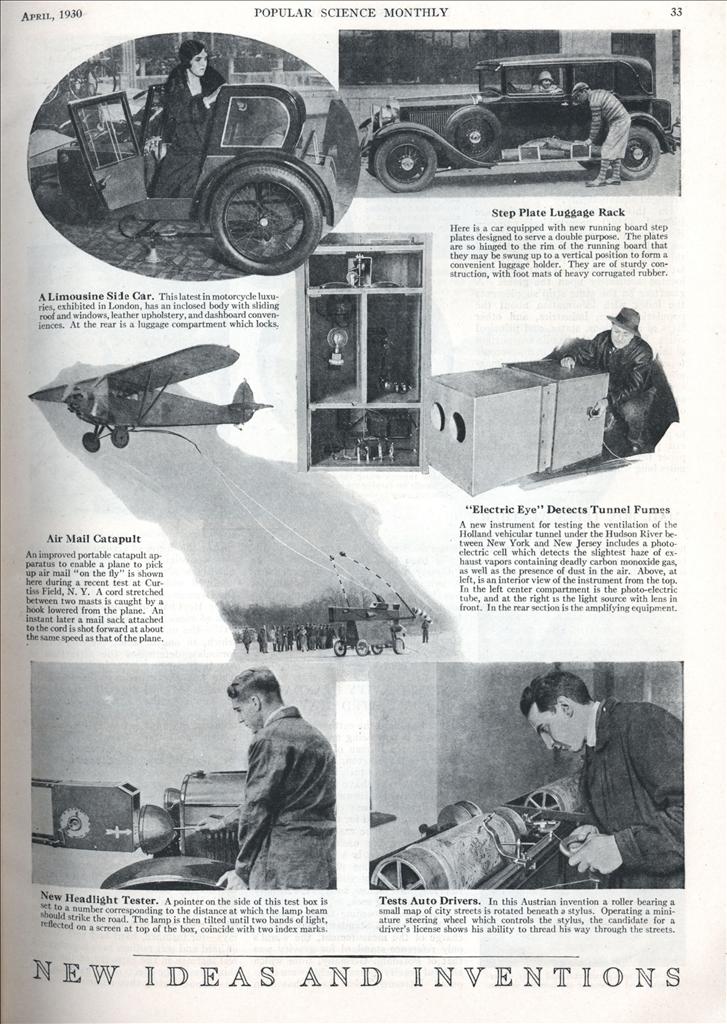 A Limousine Side Car. This latest in motorcycle luxuries, exhibited in London, has an inclosed body with sliding roof and windows, leather upholstery, and dashboard conveniences. At the rear is a luggage compartment which locks.

Air Mail Catapult An improved portable catapult apparatus to enable a plane to pick up air mail “on the fly” is shown here during a recent test at Curtiss Field, N. Y. A cord stretched between two masts is caught by a hook lowered from the plane. An instant later a mail sack attached to the cord is shot forward at about the same speed as that of the plane.

New Headlight Tester. A pointer on the side of this test box is set to a number corresponding to the distance at which the lamp beam should strike the road. The lamP is then tilted until two bands of light, reflected on a screen at top of the box, coincide with two index marks.

Step Plate Luggage Rack Here is a car equipped with new running board step plates designed to serve a double purpose. The plates are so hinged to the rim of the running board that they may be swung up to a vertical position to form a convenient luggage holder. They are of sturdy construction, with foot mats of heavy corrugated rubber.

“Electric Eye” Detects Tunnel Fumes A new instrument for testing the ventilation of the Holland vehicular tunnel under the Hudson River between New York and New Jersey includes a photoelectric cell which detects the slightest haze of exhaust vapors containing deadly carbon monoxide gas, as well as the presence of dust in the air. Above, at left, is an interior view of the instrument from the top. In the left center compartment is the photo-electric tube, and at the right is the light source with lens in front. In the rear section is the amplifying equipment.

Tests Auto Drivers. In this Austrian invention a roller bearing a small map of city streets is rotated beneath a stylus. Operating a miniature steering wheel which controls the stylus, the candidate for a driver’s license shows his ability to thread his way through the streets.