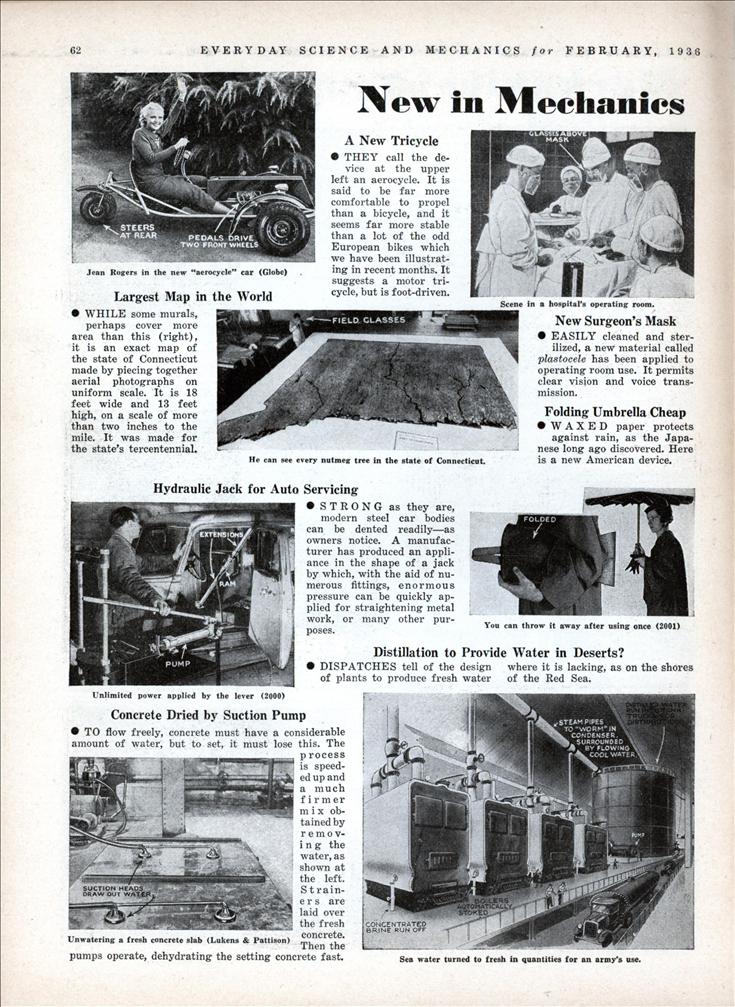 A New Tricycle
• THEY call the device at the upper left an aerocycle. It is said to be far more comfortable to propel than a bicycle, and it seems far more stable than a lot of the odd European bikes which we have been illustrating in recent months. It suggests a motor tricycle, but is foot-driven.

Largest Map in the World
• WHILE some murals, perhaps cover more area than this (right), it is an exact map of the state of Connecticut made by piecing together aerial photographs on uniform scale. It is 18 feet wide and 13 feet high, on a scale of more than two inches to the mile. It was made for the state’s tercentennial.

New Surgeon’s Mask
• EASILY cleaned and sterilized, a new material called plastocele has been applied to operating room use. It permits clear vision and voice transmission.

Folding Umbrella Cheap
• WAXED paper protects against rain, as the Japanese long ago discovered. Here is a new American device.

Hydraulic Jack for Auto Servicing
• STRONG as they are, modern steel car bodies can be dented readily—as owners notice. A manufacturer has produced an appliance in the shape of a jack by which, with the aid of numerous fittings, enormous pressure can be quickly applied for straightening metal work, or many other purposes.

Distillation to Provide Water in Deserts?
• DISPATCHES tell of the design of plants to produce fresh water where it is lacking, as on the shores of the Red Sea.

Concrete Dried by Suction Pump
• TO flow freely, concrete must have a considerable amount of water, but to set, it must lose this. The process is speeded up and a much firmer mix obtained by removing the water, as shown at the left. Strainers are laid over the fresh concrete. Then the pumps operate, dehydrating the setting concrete fast.